Continental and Delta increase fares; American Airlines wins on the Pacific and Atlantic

The rise in airline stocks occurred despite a drop in the wider market, with the Dow (-0.4%) ending trading down slightly. Investors were concerned over the world economy, after the People’s Bank of China announced plans to raise the ratio of reserves banks must save by 0.5%, the second increase this year, and the European Union reported a weaker than expected 0.1% increase in euro zone combined GDP.

Full service US carriers led the charge on Friday, after FareCompare.com CEO, Rick Seaney, stated that both Continental Airlines (+4.3%) and Delta Air Lines (+3.6%) raised their round-trip fares by USD10 on Friday, in response to United Airlines' (+1.9%) fare increase on Wednesday. American Airlines (+2.6%) and US Airways (+7.8%) also increased their fares on Thursday.

American Airlines' (+2.6%) stock was upgraded by Stifel Nicolaus during trading, due to improved passenger revenue per ASM estimates for Jan-2010, and Japan Airlines’ decision to maintain its alliance with the US carrier. The analysts upgraded American’s share rating from ‘Hold’ to ‘Buy’, with a price target of USD13. Stifel Nicolaus also increased its FY2010 PRASM estimate for the carrier from 9% year-on-year to 10.7% year-on-year.

Also after Friday trading closed, American Airlines and Japan Airlines filed an application with the DOT for antitrust immunity to forge a closer relationship and implement a Joint Business Agreement (JBA) governing the operation of services between North America and Asia. The airlines also will notify Japan's Ministry of Land, Infrastructure, Transport and Tourism (MLIT) of the transaction. Under an immunised JBA, JAL and AA will, cooperate commercially on flight operations while continuing to operate as separate legal entities. The airlines will coordinate fares, services and schedules and will "find opportunities to lower costs and have greater ability to invest in products, services and fleets". The JBA will be "metal neutral" (ie the airlines will share revenue on all JBA flights).

Freight carriers UPS and FedEx down

Elsewhere, stock markets were not as kind to Air Canada (-3.3%) on Friday, while freight carriers Fedex (-1.2%) and UPS (-1.0%) were also down. UPS was last week informed by the European Commission that it is currently being investigated over price fixing allegations. FedEx stated it had not been contacted regarding the investigation.

US Bureau of Transportation Statistics (BTS) announced during trading that US carriers had an on-time performance rate in 2009 that was their best since 2003. Furthermore, carriers’ rate of mishandled baggage last year was the lowest recorded since 2004. See related article: US on-time performance improves. Good news, sort of

America Airline Daily provides the latest in North and South American airline data, as well as up-to-date news and analysis. 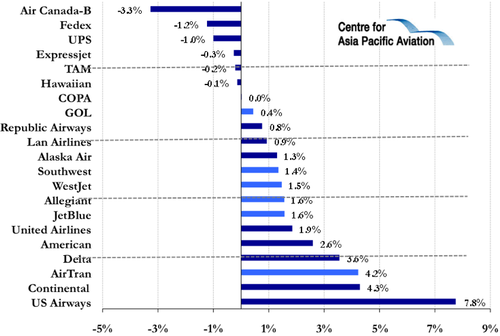