North and South American carriers’ stocks sent the AMEX Airline Index (-6.3%) tumbling on Wednesday, with all carriers, except for Air Canada (no change) and WestJet (+3.6%), seeing stocks down at the end of trading.

Airline stocks were led down by Continental Airlines (-13.8%) and American Airlines (-11.9%), after reporting larger than expected losses in their 3Q2009 results.

According to the carrier, 3Q2009 results continued to be adversely affected by significant declines in high yield traffic as business passengers are flying less and purchasing lower yield economy tickets due to the global recession. Mainline load factor in 3Q2009 was a record 85.8%, up 2.9 points year-over-year. However, Continental's mainline yield decreased 21.7%. As a result, mainline RASM was down 19.1% year-on-year.

CEO, Jeffery Smisek stated “your high-yield travelers are simply either not traveling, or they're traveling more in the back of the bus. And that is where we have to be somewhat dependent on the economy coming back,” However, Mr Smisek noted there was some hope, stating "there are a growing number of our corporate accounts that tell us that they're beginning to ease their most Draconian travel restrictions, and some are even permitting travel for internal meetings again. Although this is encouraging the yields are still soft."

Operating results for the period meanwhile improved USD213 million year-on-year, primarily driven by a USD926 million decline in fuel expense, which was largely offset by a USD839 million decline in revenue compared to the same period last year. As a result, the carrier reported an operating income of USD61 million for the quarter. Meanwhile, due primarily to significantly lower jet fuel costs, Continental's mainline cost per ASM (CASM) decreased 21.1% year-on-year in 3Q2009.

Despite the result, Standard & Poor's reiterated its "Buy" rating on the carrier’s stocks, due to Continental’s belief its declines in revenue have bottomed out.

American Airlines (-11.9%) meanwhile reported a net loss of USD359 million for 3Q2009, or USD1.26 per share, its seventh loss in eight quarters. The results include the impact of approximately USD94 million in non-recurring charges related to the sale of certain aircraft and the grounding of leased A300 aircraft prior to lease expiration. Excluding those non-recurring charges, the third quarter 2009 loss was USD265 million, or USD0.93 per share. The current quarter results compare to a net profit of USD31 million in 3Q2008, or USD0.12 per diluted share.

Like Continental, American Airlines also identified falling yields as its main issue, noting more aggressive pricing industry-wide and reduced traffic in the premium cabins. American's mainline load factor was a record 83.9% during the quarter, up 1.7 ppts year-on-year. However, American's 3Q2009 yield decreased by 16.3%. Chairman and CEO, Gerard Arpey stated "the struggling economy continues to dampen the demand for air travel, making it difficult to fill our aircraft with customers willing to pay fares sufficient for us to make money,"

Operating income fell -10% for the period, to a loss of USD194 million. Meanwhile, mainline cost per ASM in the quarter decreased by 13.5% year-on-year, due to lower fuel prices.

But AirTran reports a profit… 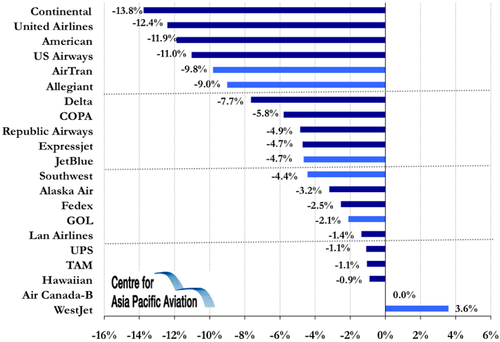