Continental Airlines reported an encouraging set of traffic results for November, with record mainline load factors, smaller falls in yields and an improving cash outlook, reflecting a steady improvement in the US airline operating environment. 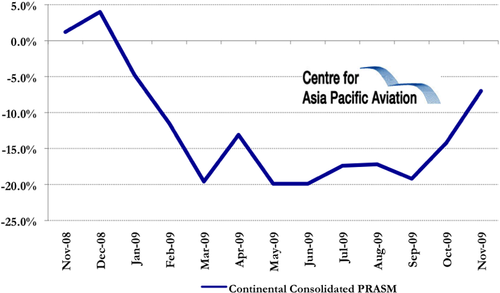 Furthermore, Continental stated it anticipates ending 2009 with an unrestricted cash, cash equivalents and short-term investments balance of approximately USD2.5 billion – an improvement from the USD2.4 billion estimated as part of its third quarter earnings announcement on 21-Oct-2009. Continental ended 3Q2009 with an unrestricted cash balance of approximately USD2.55 billion, down from USD2.77 billion at 30-Jun-2009.