US airline share prices were weaker on Friday, reflecting weakness in the overall US market and Continental Airlines' report of less than hoped-for figures for Jun-2010.

Both Continental (-9.3%) and erstwhile partner, United Airlines (-10.3%) slumped. Republic, whose future is vitally connected to the fortunes of the majors, also shed 9.7% of value in sympathy.

Continental Airlines on Friday reported an increase in Jun-2010 passenger numbers of a modest 0.8% y-o-y, to 5.7 million. Asia Pacific operations were the standout, with a year on year increase of 20.4% in revenue passenger miles. For Jun-2010, consolidated passenger revenue per available seat mile (RASM) is estimated to have increased by 21-22% year-on-year, while mainline RASM is estimated to have increased between 20.5% and 21.5%. For May-2010, consolidated passenger RASM increased 23.4% compared to May-2009, while mainline passenger RASM increased 22.6% compared to the same period 2009.

The S&P 500 fell 5.2% last week, extending the longest slump for the Dow Jones Industrial Average since the financial crisis of 2008. The reduction coincided with US Labor Department figures which revealed that total payrolls fell by 125,000 last month, with separate data also revealing that factory orders fell 1.4% in May-2010, almost three times as much as expected. The two reports raised market concerns that the economic rebound is slowing.

Shares in Southwest slipped 2.2% on Friday, while AirTran, JetBlue and Allegiant were also weaker, slipping 1.9%, 1.8% and 0.2%, respectively. In the Canadian market, shares in WestJet gained 0.4% while Brazilian LCC, GOL, gained 2.5% on Friday. 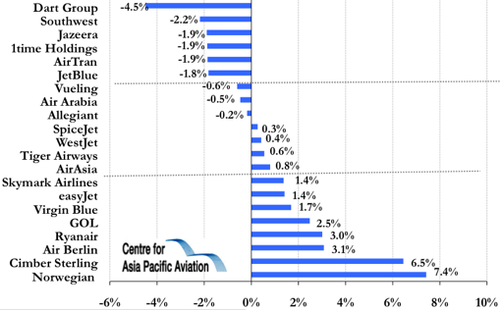 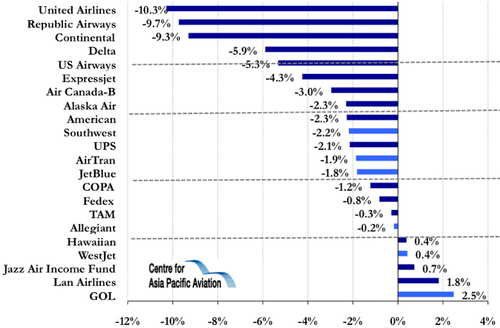