Kenya Airways (+2.3%) welcomed (12-Oct-2010) the appointment of SM Mbae from the labour headquarters as a conciliator to facilitate talks between management and the Aviation and Allied Workers Union (AAWU) Kenya. Mr Mbae has convened a conciliation meeting on 13-Oct-2010 for talks.

CEO Titus Naikuni reassured passengers, investors and the public that the airline operations will function as scheduled. The carrier also welcomed the move by the Secretary General of Central Organisation of Trade Unions (COTU), requesting its affiliate union to call off the strike and return to the negotiating table for further talks. According to a Reuters article, Kenya’s shares closed 2.3% higher on Tuesday (12-Oct-2010) following a court ruling blocking a strike by workers over pay

Lonrho (-1.9%) announced that it has successfully completed an offering of USD60 million guaranteed convertible bonds due 2015 by the company's wholly owned direct subsidiary, LAH Jersey Limited, subject to shareholder approval. The bonds are convertible into redeemable preference shares of LAH Jersey Limited which are guaranteed by, and will be exchangeable immediately upon issuance for, ordinary shares of 1p each in the company. Lonrho has the option to further place up to USD10 million of additional bonds, for which there is significant existing demand.

Lonrho stated the net proceeds of the offering will be used to allow the company and its subsidiaries to repay certain existing indebtedness, to fund general working capital and to accelerate growth in its operations. 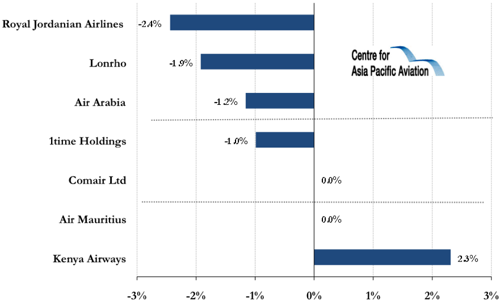