European carriers’ shares were mixed on Wednesday (17-Mar-2010), despite European markets reaching a 17-month closing high. Shares gained after the US Federal Reserve stated the day prior that it would keep interest rates near zero for the forseaable future.

Cimber stated that as a consequence of the intensified competitive situation, it has been decided to optimise capacity utilisation and reduce the activity level to 23 aircraft units in own production, down from a previously expected level of 28 aircraft units. Meanwhile, the substantial optimisation of Cimber Sterling’s traffic programme for the summer of 2010 is expected to result in an increase in the number of seats offered as well as the ASK by more than 20% as compared with the summer of 2009.

British Airways (-2.1%) was also down after Moody's Investors Service lowered British Airways' corporate family rating further one notch further into junk territory, commenting that pension woes would be a burden into "the foreseeable future". However, the ratings agency added that the company's liquidity remains satisfactory, adding that the carrier's planned merger with Iberia Lineas Aereas de Espana represents a positive development for both airlines, although it believes the financial impact will be longer-term. Moody's also lowered BA's corporate family and probability of default ratings by one notch each to B1 (which is four notches into junk territory). Last month, Standard & Poor's Ratings Services lowered BA by one notch to BB- (which is one notch above Moody's new rating), citing expectations of only a gradual improvement in the sector in 2010 and 2011, as well as potential for labour issues and uncertainty about pension woes.

Air France KLM (+1.0%) gained despite reports its flight attendants plan to stage a four-day strike between 28-Mar-2010 and 31-Mar-2010 if they are unable to come to an agreement on working conditions that will accompany proposed changes in services on short and medium-haul services in France and within Europe. Six trade unions are supporting the walk-out. 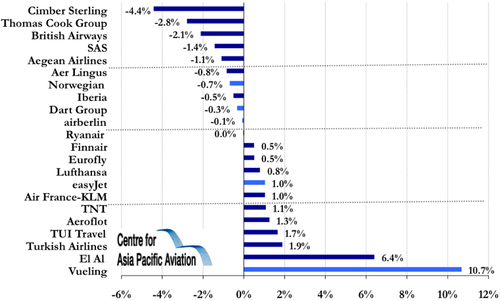