Shares in Danish LCC, Cimber Sterling Group, fell 9.1% yesterday, the largest reduction in the past five months in Copenhagen trading, after the carrier stated it expects to report losses of up to EUR11 million in FY2010/2011.

The carrier, however, stated it expects revenues to increase by approximately 29% in the current financial year.

The Danish LCC yesterday also released its Jun-2010 traffic highlights, with the carrier handling 245,299 passengers in the month (an 11% year-on-year increase) with an average load factor of 65% (a 3 ppt reduction).

The carrier also released May-2010 yield data, with a 4% year-on-year yield reduction in the month to EUR 12.07 cents while RASK remained stable at EUR 7.51 cents. The carrier commented: “A stabilisation was seen relative to the performance in previous months, and the periods have become more readily comparable”.

Domestic yields slumped 24% in May-2010 (partially offset by a 6 ppt load factor increase to 65%), while regional yields decreased 5%. Conversely, yields for the leisure segment increased by 11%.

Also in the Nordic market, Norwegian Air Shuttle reported another month of double-digit yield and unit revenue reductions, with slumps of 16% and 17% respectively (to EUR 6.70 cents and EUR 5.21 cents respectively). The carrier commented that the RASK reduction was related to the introduce of 11 new B737-800 aircraft with higher capacity and lower unit costs since Jun-2009. Also in the month, the carrier reported a 25% increase in passenger numbers to 1.2 million with an average load factor of 77% (a 2 ppt year-on-year reduction). Its shares fell 3.3% yesterday. 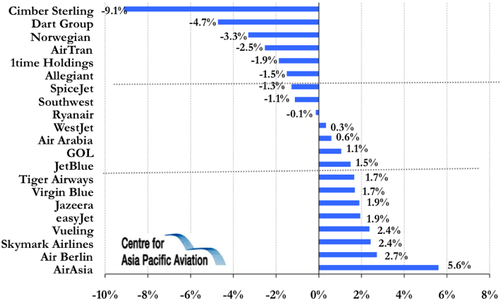