Danish LCC Cimber Sterling has announced it is talking with potential investors in a bid to improve its financial strength. The carrier has been forced to revise its operating outlook for the financial year to 31-Mar-2011 downwards from an operating loss of DKK125-145 million (EUR16.8-19.5 million) to a loss of DKK190 million-200 million (EUR25.5 million-26.8 million), before it accounts for special items.

The latest downwards revision by Cimber Sterling follows from the carrier’s third quarter loss of EUR15.8 million, reported in Mar-2011, when it cut its outlook from a minor full-year operating profit of DKK20-80 million (EUR2.6-10.7 million) to a full-year loss.

Overcapacity and fuel prices to blame

The carrier has blamed higher fuel costs and continued overcapacity in its markets, a common theme among Scandinavian carriers. SAS warned in its Apr-2011 traffic reports that “overcapacity remains in certain markets, particularly on European routes from Denmark and in the Swedish market”. SAS also cautioned that the “trend is uncertain for both yield and jet fuel prices”.

Cimber Sterling reports that increased oil prices have blown out its full-year operating costs by BKK133 million. The airline, which operates a network of seven domestic and 41 international destinations, continues to report healthy passenger traffic growth, but “persistent surplus capacity in the market is impacting Cimber Sterling’s ability to achieve profitable growth” according to a statement.

Revenue growth for the full-year is expected to be 25% to approximately DKK1.925 billion to DKK1.95 billion (EUR258-261 million), a minor cut from the earlier forecast of DKK2 billion (EUR268 million). The carrier reports that the level of passenger activity has been “satisfactory” and outlook has improved in all three of the company’s business areas: domestic, regional and leisure. 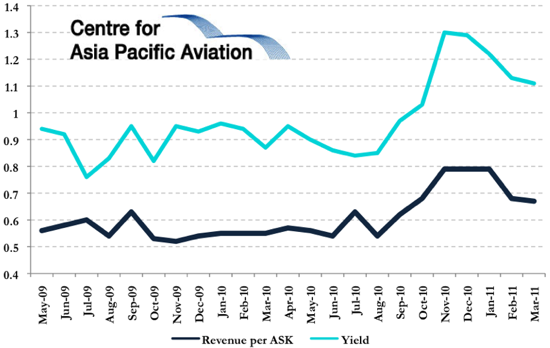 Not everything is bleak for the carrier, and its operational results are increasingly positive. Revenue per ASK and yields improved substantially in late 2010, with the carrier reporting it was able to increase prices and ancillary sales. In 3Q2010/11, the carrier’s yields were up 28%, while revenue per ASK climbed 37%. Costs per ASK were up 34%, but only rose 20% excluding the effect of higher fuel costs.

Cimber Sterling has significantly increased its domestic operations, lifting its Danish domestic market share from 41% in 2009/10 to 52% in 2010/11 as it takes delivery of more ATR turboprops. The carrier deploys approximately 46% of its capacity on domestic routes. The majority of its international capacity is deployed around western Europe and the Mediterranean, with limited operations into North Africa and Israel.

Yield growth has been better on domestic markets, but its European operations from Copenhagen and Billund face stiff competition from other European LCCs –primarily Ryanair and easyJet - as well as Scandinavian rivals such as SAS and Norwegian Air Shuttle. 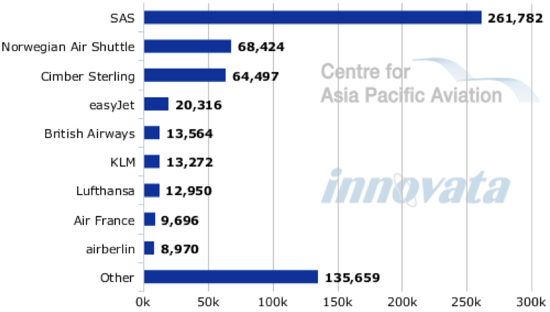 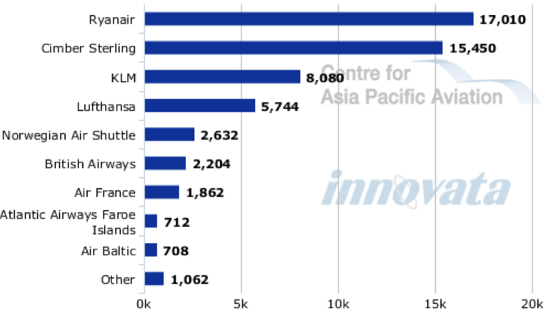 With the increasing focus on short-haul domestic operations, Cimber has actually cut capacity and overall RPKs, at the same time as substantially increasing passenger numbers. 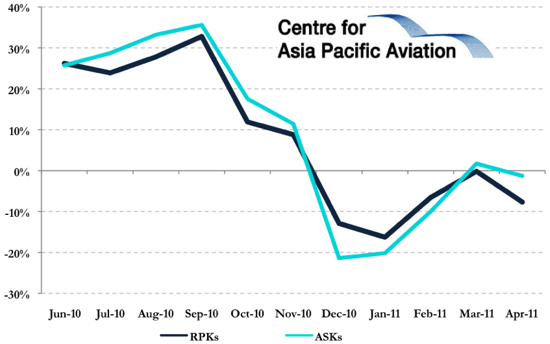 With losses mounting, Cimber Sterling is embarking on negotiations with investors to help stabilise its perilous situation. The carrier’s capital base is “deemed to be insufficient” and there is substantial pressure on its liquidity position. For the three months to the end of Dec-2010, cash in bank and at hand declined to just DKK416,000 (EUR55,800), down from DKK70.3 million (EUR9.4 million) at the same time 12 months earlier.

In Mar-2011, the carrier signed an agreement with GEM Global Yield Fund to invest DKK300 million (EUR40.2 million) into the carrier, through three annual tranches of DKK100 million, in exchange for new shares. The deal will come into effect for FY2011/12, but is still subject to approval from shareholders, with a vote to come in Jun-2011.

The carrier said it has received “positive indications of interest from a number of potential investors (both industrial and financial) and discussions are currently ongoing with a number of these parties. Provided they produce positive results, these discussions will lead to a strengthening of the capital base.”