Speculation regarding Cimber Sterling’s future continues to surround the Danish LCC as it announced the adoption on 08-Jun-2011 of proposals to increase share capital made by the board at the carrier's AGM and appointed a mergers and acquisitions specialist to its board.

Cimber Sterling announced the appointment of Kåre Bo Stolt as a new member of the company's board of directors. Kåre Stolt is an attorney-at-law and Senior Partner of Accura Advokatpartnerselskab, with a specialty in M&A, stock market issues and corporate law. The airline also announced the adoption of several proposals for authorisations made by the board at the carrier's AGM.

Among the AGM proposals were:

In talks with 'number of potential investors'

Cimber Sterling capital base is “deemed to be insufficient” and there is substantial pressure on its liquidity position. For the three months to the end of Dec-2010, cash in bank and at hand declined to just DKK416,000 (EUR55,800), down from DKK70.3 million (EUR9.4 million) at the same time 12 months earlier.

To strengthen its cash resources, Cimber Sterling sold three of its 14 owned aircraft in early Dec-2010 and in Mar-2011 signed an agreement with GEM Global Yield Fund to invest DKK300 million (EUR40.2 million) into the carrier, through three annual tranches of DKK100 million, in exchange for new shares. The deal will come into effect for FY2011/12 now that it has been approved by the carrier’s shareholders.

Acquisition by Skyways parent slated as one option

In late May-2011, shares in the Danish LCC, which have moved erratically in conjunction with financial and investment news and speculation, soared by as much 59% after reports that Ukrainian billionaire Igor Kolomoisky was in talks to acquire the company. Cimber Sterling stock, which tumbled 8.5% in trading on 08-Jun-2011 to close at DKK2.05, is valued 79.5% below its DKK10 listing price. 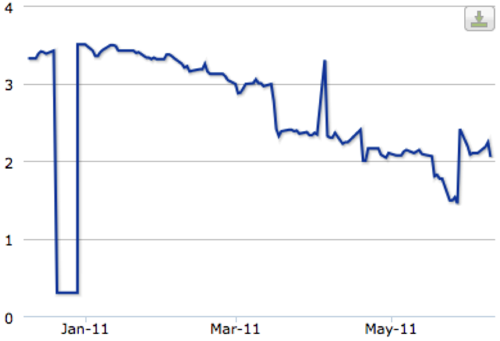 Mr Kolomoisky, who has diverse interests from media and banking to oil and gas, would reportedly merge Cimber Sterling with Swedish carrier Skyways, which Mr Kolomoisky controls, to form a stronger northern European airline. Mr Kolomoisky acquired Skyways at the end of last year through a Cypriot holding company.

The rumours were neither confirmed nor denied with Skyways CEO Lars Ake Bertilsson stating only: “We aim to create a strong northern European airline under the name Skyways, and we absolutely would like to be present in Denmark, Norway and Sweden where it would be obvious to start.”

Earlier in the month, Cimber Sterling again downgraded its guidance, warning that losses for its 2010/11 financial year would be deeper than expected and it was talking to investors about strengthening its capital base.

The carrier revised its operating outlook for the financial year to 31-Mar-2011 downwards from an operating loss of DKK125-145 million (EUR16.8-19.5 million) to a loss of DKK190 million-200 million (EUR25.5 million-26.8 million), before it accounts for special items. Revenue growth for the full-year is expected to be 25% to approximately DKK1.925 billion to DKK1.95 billion (EUR258-261 million), a minor cut from the earlier forecast of DKK2 billion (EUR268 million). The carrier reports that the level of passenger activity has been “satisfactory” and outlook has improved in all three of the company’s business areas: domestic, regional and leisure.

The latest downwards revision by Cimber Sterling follows from the carrier’s third quarter loss of EUR15.8 million, reported in Mar-2011, when it cut its outlook from a minor full-year operating profit of DKK20-80 million (EUR2.6-10.7 million) to a full-year loss.

The carrier has blamed higher fuel costs and continued overcapacity in its markets, a common theme among Scandinavian carriers. Cimber Sterling stated increased oil prices have blown out its full-year operating costs by BKK133 million. The airline, which operates a network of seven domestic and 41 international destinations, continues to report healthy passenger traffic growth, but “persistent surplus capacity in the market is impacting Cimber Sterling’s ability to achieve profitable growth”.

In a further challenges for the struggling LCC, Cimber has had several management and board changes over the past few months, as it struggles to turn around its performance. Christian Nielsen resigned from the board on 03-Apr-2011, having only been elected to the post in Aug-2010. Stefan Vilner, formerly CCO at Sterling and CEO at Jetbird succeed Lars Bording, who left the carrier at the end of Apr-2011. CFO Henriette Schütze left the carrier at the end of Jan-2011.