European airline shares were mostly up on Thursday (04-Mar-2010), as the recent rally in oil prices (-0.8%) came to an end, ending the day at USD80.21. European markets were meanwhile down on mixed data from the US, despite the European Central Bank and Bank of England keeping rates on hold.

Competitor, Ryanair (-1.8%) meanwhile announced plans during trading to open its 41st base at Malta in May-2010, with one based aircraft and 19 routes (six of which will be new). New routes include services from the airport to Billund, Bologna, Krakow, Marseille, Seville and Valencia.

Lufthansa (-0.8%) and Aeroflot (-0.7%) were also down. Lufthansa announced plans during trading to increase Frankfurt-Tunisia frequency from daily to ten times weekly this month.

Europe Airline Daily supplies the very latest on what’s happening in the European aviation industry. Other stories featured in today’s issue include: 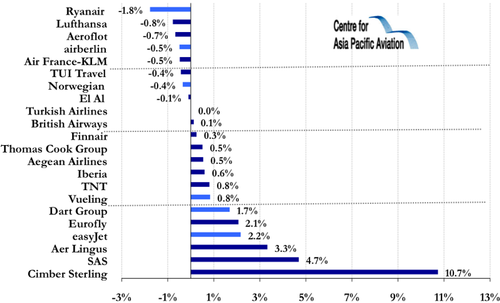