European carriers’ shares were led higher on Friday (05-Mar-2010) by Nordic airlines reporting traffic results for Feb-2010, despite a rise in oil prices (+0.4%), to USD81.18. Wider markets also pushed airline shares higher, with markets up on easing concerns over Greece’s debt issues and a smaller than expected decline in US jobs for Feb-2010. Markets rose to a six-week high as a result.

However, yield for Jan-2010 was down a massive 39%, EUR 13.30 cents. This performance covers a "significant" change in the product offering in the two comparative periods caused by a "sharp decrease in the share of leisure traffic", according to Cimber Sterling. The yield for the Leisure segment increased by 26%, while yield for domestic operations dropped by 29%, which was partially offset by a 29 ppts load factor increase from 52% to 72%. The yield for the regional segment dropped by 5%.

Meanwhile, competitor, Norwegian Air Shuttle (+5.3%) also witnessed a rise in its share price, after also reporting a 25% increase in passenger numbers, to 834,884. However, load factor was down 2 ppts, to 76%.

Like Cimber Sterling, Norwegian’s yields for Feb-2010 also dropped, declining 16% for the month, to EUR 6.23 cents - less than half Cimber’s yield. Norwegian stated the reduction reflects significant adjustments to its route portfolio, the introduction of new aircraft with higher capacity and lower unit cost, and the removal of fuel surcharges that covered the record high fuel prices of 2008. Revenue per ASK was also down, falling 19%, to EUR 4.77 cents.

Yield for Jan-2010 declined 14%, however, when measured against ASK, the decline was approximately 8-9%, as the improved load factor partly compensated for the lower yield per RPK. SAS noted that its yield results for Jan-2009 and Feb-2009 were "positive".

For Feb-2010, the change in yield is also expected to be negative, as the market continues to be unpredictable.

More on these stories and more can be found in today’s issue of Europe Airline Daily. 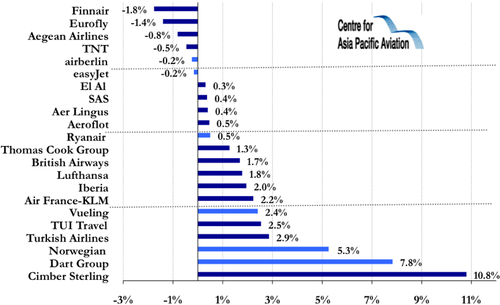