The Chinese New Year travel season, billed as the world's largest migration, once again fills the headlines with astounding numbers of passenger movements. Some airlines set maximums on pricing, for fear of being seen as price gouging if revenue management systems followed their normal pricing curve upwards.

Even the most sceptical investors would be forgiving for contemplating airline ownership during the travel rush. The question, and lurking problem, is what happens the rest of the year.

China's concentrated and en masse travel periods present a challenge for sustainability. Airlines local and foreign are often reduced to hoping that routes will be annually profitable based on a few weeks of travel during Chinese New Year, the brief summer peak, and the autumn holidays. With load factors consistently high, yields are weakened, either on point-to-point traffic or as Chinese airlines aggressively discount connecting/transfer traffic.

On a volume basis, international traffic remains strong, expanding by an estimated 9.3 million passengers in 2016 for 22% growth. Chinese airlines continue to pivot to the international market, and Air China now has more capacity internationally than domestically.

CAPA's News Briefs and press clipping service has accumulated many of the traffic figures and projections coming in during the first part of the 2017 Lunar New Year. A selection is copied below.

The figures can be overwhelming: China Southern flew over a quarter of a million passengers on a single day. Guangzhou airport broke traffic records two days in a row.

The higher New Year volume, yields, and profits are, the more challenging the off peak period becomes.

Chinese load factors and utilisation high year round, but yields would show a difference

The drawbacks of such intense travel concentration are not readily manifested in publicly available metrics. As load factors are strong year round, peak January/February load factors have only little room for improvement. The more telling analysis would be of yields, but these are unavailable on a weekly or even monthly basis.

So far this decade Chinese airlines have operated across their networks with load factors in a tight gap between 80-85%. Most capacity is controlled by state owned airlines that have to report successful finances, but also output.

These two come into contention with the need to balance yield and load factor, so the consistent load factor performance in the region of 80-85% indicates some government ideals about efficiency. The load factors typically comprise near 100% rates in economy but very low premium cabin load factors.

Chinese airlines have a load factor spike in February and then August. Chinese New Year is difficult to discern as the exact dates change over January and February, making year-on-year comparisons for individual months difficult. The highest load factors this decade were Aug-2016 (86.1%), Aug-2015 (85.8%) and then both Jul-2011 and Feb-2014 (85.6%) 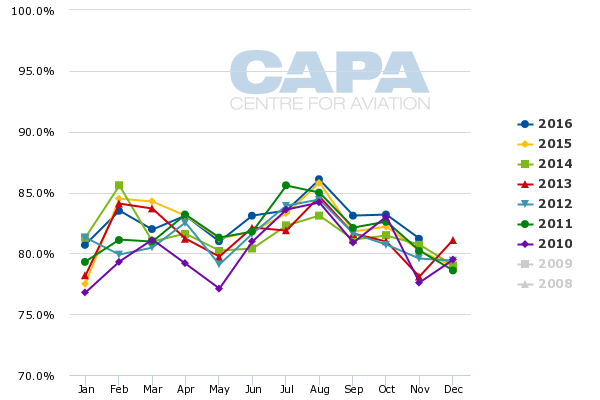 On an annual basis, load factors have hardly improved from the 81-82% observed since 2011. 2016 figures are only available through November and show marginally higher 82.8% performance, but historically low December load factors will likely drag the full year 2016 slightly downwards. 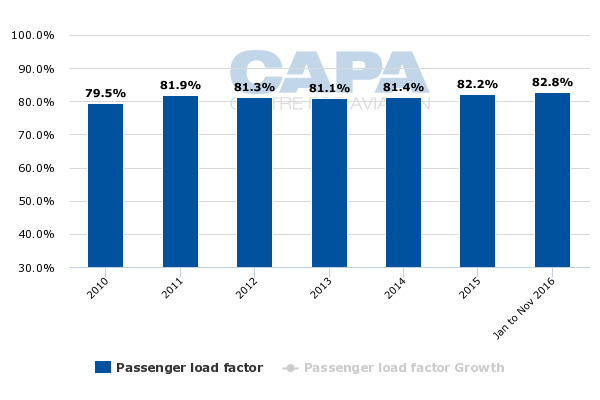 With the Chinese airlines' state owner expecting productivity and economic contribution by flying passengers, it would not be possible to follow European LCCs that famously ground a substantial portion of their fleet in off peak periods.

Aircraft utilisation hovers 9-10 hours a day, with noticeable peaks in February and then the summer months of July and August. February has been the usual month for Chinese New Year, but when it has occurred in late January or early February, January also shows some utilisation spikes. 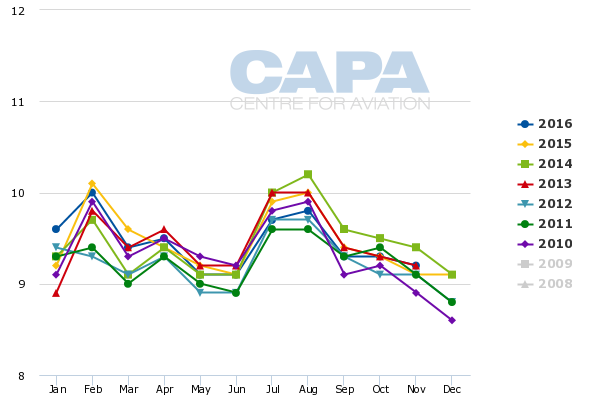 International traffic for China is estimated to have grown approximately 22% in 2016. Traffic results are available through Nov-2016, so the full year figure is an estimate.

This estimated growth is a slowdown from 2015's unprecedented 33% expansion. 2015 was an anomaly, with airlines rushing to utilise traffic rights while at Shanghai Pudong – the largest international gateway – there was a rapid increase in slots due to a new runway.

Beijing is constrained but upgauging, and incremental growth has produced approximately 9% international growth in each of 2015 and 2016. The year 2016 was hampered by the depletion of traffic rights in major markets in North America and Europe, while China Southern did not have adequate widebody aircraft numbers for delivery, a situation which will largely persist in 2017. 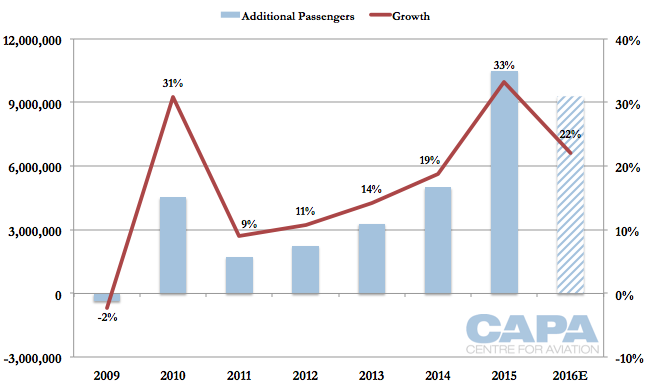 There are still too many factors – mostly infrastructure, airspace and state planning – to explain growth as reflecting demand, and any weakness owing to slower economic growth. China continues to have pent up demand and air travel is not as closely correlated to GDP growth as other global examples suggest.

This is not to understate what was still a very good 2016 – an envy of most other markets and, if anything, still too fast for Chinese airlines, which increasingly want to focus on sustainability but must meet government growth targets.

Although growth slowed from 33% to an estimated 22%, the net additional volume of international passengers for 2015 was 10.5 million, while in 2016 it was an estimated 9.3 million. The net growth continues to be significant, despite a slower percentage expansion as the base figure rapidly rises. As the base figure for comparisons continues to grow, it is important to evaluate net growth and not just percentage growth. 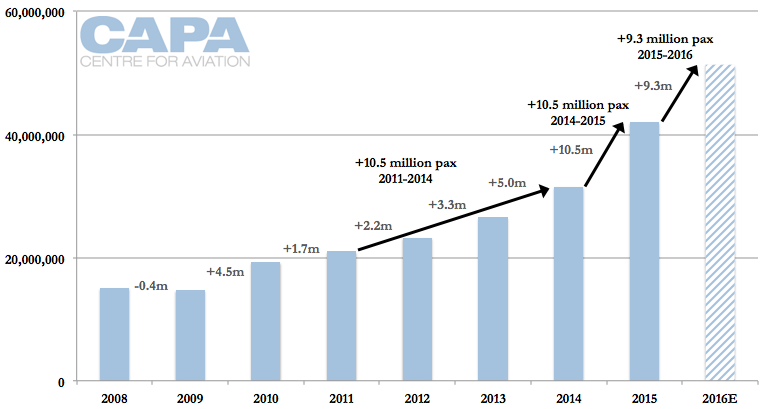 After 2013/2014 the international growth became disproportionately large. This was for a few reasons: the government was actively encouraging airlines to fly more internationally. This was part of wider strategic initiatives for Chinese airlines to "go out" (rebalancing foreign airlines but also planting the Chinese aviation footprint abroad).

It also helped better use of scarce Chinese slots, since a Chinese airline needs two Chinese slots for a domestic sector but only one Chinese slot for an international sector (the foreign airport provides the other slot). Chinese airlines became more confident of their product and benefited from visa liberalisation, ranging from Japan to the US. 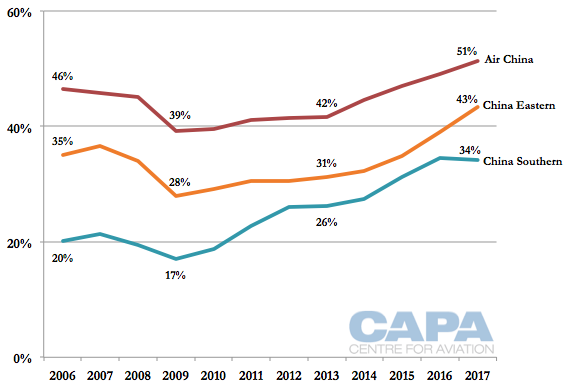 Air China has long been the most internationally focused Chinese airline and in four years from 2013 to 2017 has increased international flying's share from 42% to 51%. China Eastern has increased from 31% to 43%, while China Southern has increased from 26% to 34%. China Southern will experience a small dip from 35% in 2016 to 34% in 2017; this is due to a shortage of widebody aircraft because of a gap in fleet planning. This will be corrected with 787-9s and, according to unconfirmed media reports, further 777-300ERs and a new order for A350s.

Better to have peak travelling periods than no peaks, but balancing is needed for sustainability

To be certain, from an aviation perspective (and ignoring cultural and personal pulls) it is better to have these travelling peaks and the demand they generate than not at all.

But smoother year round demand would help aviation providers. This extends beyond China as smoother demand reduces the need for aggressive sixth freedom traffic in the long off-season.

It is one of many changes that would help Chinese aviation for the long term. The government can help with structure and quantity of annual leave, but this is probably one of the less immediate priorities for change in the industry.

With such strong traffic numbers, it is hard to convey the view that the strength also has underlying weaknesses.