Chinese aviation: reports of its demise are greatly exaggerated, as outbound tourism burgeons

China, along with instability in the Middle East and the latest health concern, have become catch-all excuses for those looking to describe the challenges faced by aviation. Concerns elsewhere may be legitimate and, in the case of Brazilian economic weakness, showing serious impacts.

Yet China’s aviation outlook is more than just bright; it is arguably the strongest it has been in its history. Chinese aviation is heading for an upturn over the next few years as part of its 'golden era' of development, forecast to run for perhaps 10-15 years.

International operations are producing growth and change on a profound scale, from the sheer size of the market to impacts on partnerships and global alliances. The domestic market continues to be delineated by the State-owned and private airlines. A rush of start-ups is under way, some of them better models than others. The shift to low cost output continues apace.

Aviation’s growth correlation to GDP is well established in most markets. It is not always as sticky in China for a several reasons.

In the past it has largely been infrastructure that propped up China's (sometimes questionable) GDP figures. These works have little direct impact on the average person.

The economy is slowly diversifying and will have broader impacts on consumers than constructing a building or highway.
The Shanghai stock market’s volatility has been cited as further concern for the Chinese economy, but a tiny fraction of savings are held in the market.

Much of Chinese travel is for leisure; for international the outlook is exceptionally strong

What the market used to add over three years has now been achieved in a single year. The 42 million international passenger figure in 2015 is double the 21 million carried in 2011. The figures reflect the growing outbound demand of Chinese tourists and Chinese airlines carrying those passengers, partially out of opportunity and partially at government urging to accelerate international growth.

China's three main state-owned airlines are deploying a higher share of their capacity to international markets. Total outbound Chinese tourists via all transportation modes and markets (including Hong Kong, Macau and Taiwan) have been approximated by the government at 120 million, but under new counting methods not yet disclosed.

2020 is forecast to result in a doubling to 200 million annual outbound Chinese visitors – but what looked impossible five years ago is increasingly looking very conservative.

The concern that airlines, airports and countries should have is now not whether the volume will materialise but how they will capture it.

This is when China's economic targets slipped but state-coordinated aircraft purchases did not decrease in tandem. The new five-year plan will align capacity to GDP – for domestic growth, at least. International will continue to expand faster. Chinese airlines expect stronger financial results and underlying strength as they can improve the foundation of their business.

In recent years they have been preoccupied with managing the sheer volume of growth, and needing to align capacity with the rapid market expansion.

This left little room for strategic initiatives, which are now increasingly coming into focus. They range from premium economy to ancillary sales (such as extra leg room seats) to better website sales and distribution. These are the low hanging fruit but are still a place to start. Wholesale restructuring – probably more extensive than has occurred in the US and European airline industries combined – can only be dreamed of; a politically cautious government still constrains airline leaders.

Until 2011 only three Chinese cities had flights to Australia. This doubled to six in 2014, and will double again to 12 – perhaps more – during 2016. A rising middle class, coupled with Australia’s liberal air service regime and low fuel prices, have meant a growing prominence of Chinese aviation, and the visitors it brings. 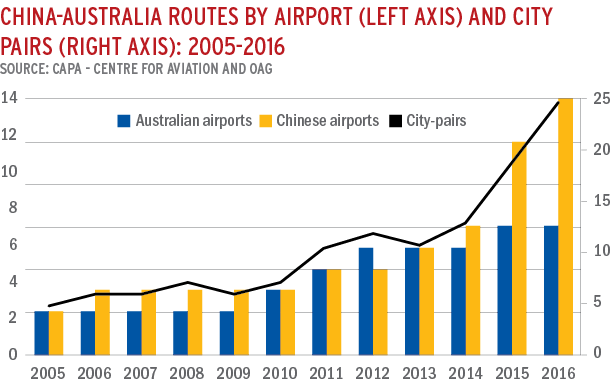 The growth in Chinese airports with service to Australia coincides with growing Australia-China nonstop city pairs: from nine in 2013 to 21 in 2016.

North America is the priority growth market for Chinese airlines: it contains good proportions of both leisure and business traffic (Europe is more leisure-oriented) and their hubs present opportunities to develop sixth freedom traffic to other parts of Asia. Growth has been frantic, and most recently has been characterised by expansion in services from secondary Chinese cities. The first secondary route was in 2012, and by the end of 2015 there were only four routes.

So far in 2016 there are nine routes in various stages of planning. Secondary routes are almost exclusively from Chinese airlines. United serves three interior points and is the only North American airline to serve a secondary city directly at present. This is less of an issue between China and Australia. Australia adopts one of its most liberal market access approaches to China and expands capacity well ahead of demand. Australia, in fact, has signalled that it will accept Open Skies. China, however, wants gradual expansion so that its airlines do not rush and create rapid overcapacity.

US airlines have long been knocking on the door for more rights to China, where they accounted for far more flights than their Chinese counterparts. Open Skies seemed a long way off for US airlines. Now, Chinese airlines now account for the majority of US-China capacity, and with higher growth trajectories. Meanwhile, US airlines have been much more cautious.

The rapid expansion of Chinese airline service has tilted the balance for China's bilateral policy thinking. Until now resistant to US government pressures to move to Open Skies, it is Beijing which now needs to seek relaxation of the capacity caps if its airlines are to expand further in the US. Delta in particular is keen now for this to happen - perhaps a little ironic given Delta’s often protectionist stance in international matters, notably where airline subsidies are involved. For Delta however, Open Skies is a prerequisite for it forming a closed joint venture with its equity partner China Eastern (assuming the latter is willing to do so).

In many markets it is now the Chinese airlines seeking greater access, after years of the reverse situation, as they sought to improve product and understanding of international markets. (Korea, the UAE and Qatar stand out as countries that seek more access than China is prepared to give.) The bilateral issues are in Europe as well, and become more complex. Some European airlines regard the situation as unfair: even if traffic rights were expanded on both sides, the European carriers could struggle to secure slots at key airports in China’s murky slot allocation environment and would need Russian overflight rights, which Chinese airlines generally have little trouble obtaining.

China has more long haul airlines than any other country, and more than North America

The defining feature for long haul development is China’s "one route, one airline", policy

The policy generally only allows one Chinese airline to operate an international city pair. There are exceptions in short haul markets, but long haul exceptions generally only concern Air China, which has been able to mount long haul flights from Shanghai when it was already served by China Eastern. This gives Air China an attractive presence in China’s other major hub but invites discontent from China Eastern, which is unable to operate from Beijing to points already served by Air China.

The one route, one airline, policy explains why Hainan Airlines’ network is mostly restricted to secondary points. Hainan does serve blue chip markets like Chicago and Toronto, which it had applied for before Air China. Air China is China’s largest international airline and thus has a wide network, leaving few options for Hainan.

Although the one route, one airline, policy was meant to produce tidy development (on paper) and prevent airlines from viciously competing with each other, there are some lost opportunities. For example three US airlines serve Los Angeles-Shanghai but only one Chinese airline does so. Chinese airlines’ long haul networks are becoming complicated and probably beyond what regulators hoped would neatly unfold.

The biggest growth is driven by the major airlines from the key gateways, but new entrants, often shut out of them, has driven the  emergence of routes from secondary Chinese cities, served both by Chinese and foreign airlines. The trend showed first with Europe, and more recently has appeared with Australia and North America.

Thanks to the market distortions due to the government’s designation  policy, secondary city  flights are often being added before the market is mature enough to sustain them, although subsidies help diffuse the cost and the recent decline in fuel prices helps further. Secondary city routes would taper off faster than those from Beijing, Guangzhou and Shanghai, should a downturn occur.

The rationale for such flights is typically one of two scenarios, or a blend: the first is the government promoting its airlines to fly international and long haul, essentially to plant the flag abroad.

The second is that airlines are taking a long term strategic view of the value of these flights, believing that if they do not launch an unprofitable route now, by the time the route is profitable another airline may be flying the service. Thus there is a pre-emptive market share battle under way; as each new route and airline is added, this stimulates fears that more markets will be swallowed by others.

A collective growth pause would be healthy but is probably impossible

Centrally led coordination of new routes is difficult where local governments and airports - keen to stimulate economic growth - encourage new services. The local forces hold autonomy and bargaining power, and as long as one airport can launch a new long haul route (or airline), that establishes a precedent.

Secondary long haul routes are a challenge for airlines, foreign and local. For secondary Chinese airlines, their entire long haul network may be unprofitable. The sometimes short peak travel periods may be commercially viable, but inadequate to offset losses during the rest of the year.

Partnerships and alliances help – thus, Xiamen Airlines joined SkyTeam in advance of its long haul launch to Amsterdam, which it operates in partnership with KLM, which also flies between Amsterdam and Xiamen. Joining an alliance and making partnerships is seen very clearly as helping Chinese airlines internationalise.

Integration and restructuring remain overarching needs of the Chinese market

Being state-owned enterprises, the State airlines are effectively unable to reduce their overweight workforces. An efficient workforce could easily result in a double-digit reduction in employment. That would allow for a lower cost base, in turn permitting more growth. That outcome could perhaps be more efficient than allowing a dozen-plus new entrants, but would be far more difficult to achieve in practical terms.

There is some talk of consolidation, which could change the ownership of many airlines. Such a reordering would be a momentous move by the State, given today’s increasingly entrepreneurial market – and probably not the most productive if it were to intervene.

As China’s aviation ecosystem faces an unprecedented reorganisation, few scenarios can be ruled out. The great positive is that there is clearly expansive growth potential and, in the short term, much of that is being realised.

For those forecasting an economy-related aviation downturn, there may be cause to rethink. There is no sign of it happening just now.