Asia's airlines are continuing to embark on what they consider to be once-in-a-lifetime long haul growth. Nowhere is this stronger than in mainland China, whose airlines have been opening 102 intercontinental destinations since 2006. Hainan Airlines and Air China lead the frenzy, with 23 and 19 new markets respectively.

China’s growth is moderating (but from a high base) as traffic rights and slots are precluding growth. Changes in subsidy and “one airline, one route” could alter growth. Following extensive operational growth, airlines throughout Asia need to have strategic growth, improving partnerships, international transfers and the onboard/airport experience.

China’s airlines have opened, or intend to open, 102 intercontinental destinations. This is sharply up from the 75 destinations they had when CAPA last surveyed the developments in Jun-2016.

Mainland Chinese airlines' long haul destinations opened or planned since 2006: as of 09-Oct-2017 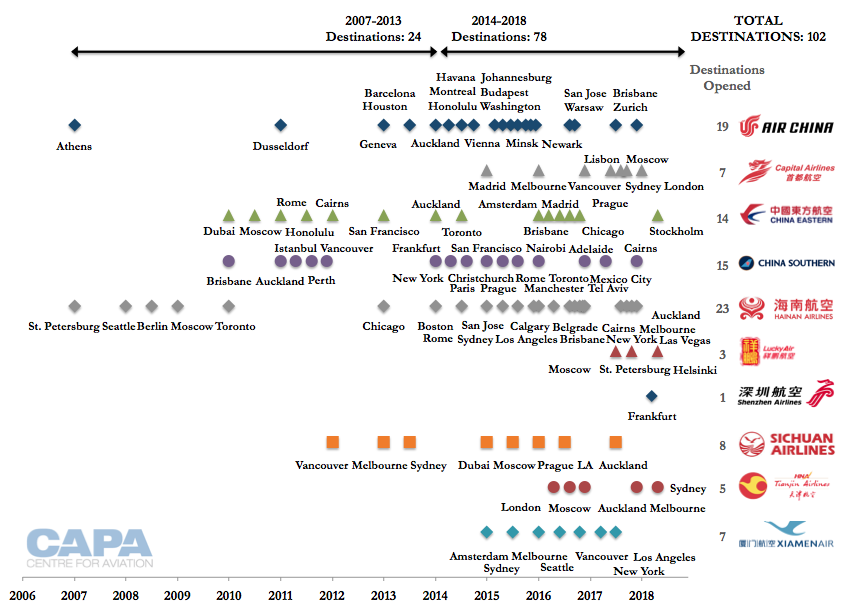 Source: CAPA - Centre for Aviation and OAG.
Notes: Destinations still in service. Includes relaunches. Excludes technical stops and destinations not flown regularly. If service has been stopped and resumed more than once, date is the most recent relaunch. For multiple destinations launched in a year, destinations are listed alphabetically.
Includes intercontinental ports with scheduled service, either year-round or seasonally. In the findings there is no weight on the number of routes to an intercontinental port, the frequency or capacity available.

Hainan Airlines and Air China open the most destinations

At the time, Air China and Hainan Airlines had opened the most markets, with 17 and 16 destinations respectively. Air China is China’s flag carrier, as well as being the most international Chinese airline, and is expected by Beijing to provide international connectivity. Hainan Airlines is privately owned and thus has a lower burden of bureaucracy, but does not enjoy as much support as do the state-owned airlines.

Hainan Airlines has accelerated growth, partially due to its aircraft delivery schedule, and has opened the greatest number of new destinations, at 23. Air China has 19.

Hainan Airlines and its HNA sister airlines in the mainland account for one third – 38 – of the 102 destinations opened. Many are to secondary foreign cities (e.g. Beijing-Seattle), or are to primary cities but from secondary Chinese cities (e.g. Changsha-Los Angeles). HNA’s proliferation partially reflects the group’s strategy – when prime routes are not available – to build cash flow, grab market share and traffic rights by flying the best available subsidised routes, with local airports and governments covering most of the operating costs.

China Eastern was a laggard among China’s state-owned airlines for international growth. China Eastern lacked the right aircraft (it had a handful of inefficient A340-600s, but now operates 777-300ERs and soon, A350s and 787s), and was also not eager to pursue long haul flying, where profits were often difficult. With improved market conditions, greater visa access for mainland Chinese and stronger airline management, China Eastern is benefiting from long haul improvements.

China Eastern had a busy 2016, opening Chicago as well as – in the span of a few weeks – four European cities. China Eastern is now slowing down, although press reports from earlier in 2017 said China Eastern would open new destinations that included Edinburgh and Houston. In Sep-2017 China Eastern filed an application to fly Shanghai-Stockholm in Mar-2018.

2016 was a peak for new destinations

Chinese airlines reached a peak of new destinations in 2016 when they opened 25. This was the result of new airlines entering long haul flying while others sought to secure the last available traffic rights in many key markets. In 2017 so far there will be 18 new markets, slightly less than 2015's 19. 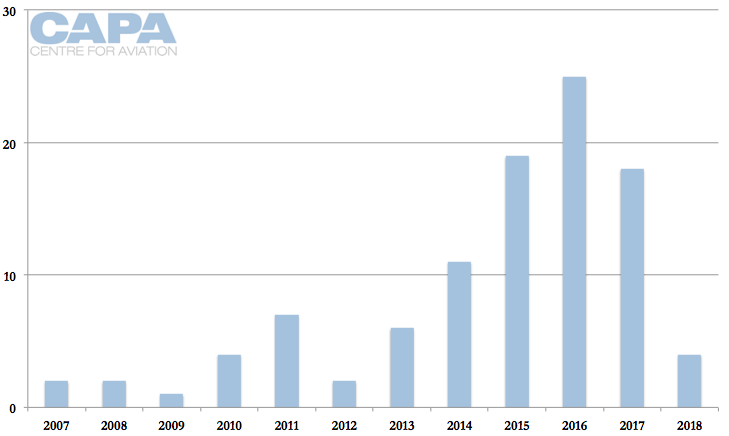 China needs to re-evaluate the value of subsidies

It is no secret that most Chinese routes, and especially those from secondary cities, are heavily subsidised in one way or another. Without the subsidies, most routes would be unsustainable. China needs to re-evaluate the purpose of, and value from, route subsidies.

Historically, incentives and subsidies were used to woo an airline that would bring in passengers, whose local spend and economic benefit outweighed the costs. However, most subsidies to Chinese airlines are for outbound travel. Subsidies secure routes and boost the profile of smaller cities, thereby earning a city more notches on a political scorecard.

There have been some secondary route exits by foreign airlines: British Airways from Chengdu, Lufthansa from Shenyang and United from Hangzhou. Airlines enter secondary markets well aware of the different, and almost always lower-yielding, characteristics. BA exited Chengdu due to greater competition, and the ability to grow in Shanghai as part of a new China Eastern partnership. United left Hangzhou once it was able to secure more slots at somewhat nearby Shanghai Pudong.

The first likely re-evaluation of subsidies (and one already occurring) will be to give preference to local airlines rather than foreign airlines.

Outlook: changes to ‘one route, one airline’ policy will be dramatic

China’s international and long haul route allocation remains broadly based on a “one route, one airline” policy, whereby only one Chinese airline can fly a route (there are a few exceptions). This has caused airlines to accelerate growth to grab traffic rights, and has resulted in airlines flying smaller markets in the event that they grow into large markets in subsequent years.

This policy has prevented China’s airlines from diluting each others' international aspirations; instead they are competing with foreign airlines while growing China’s international footprint.

Airline maturity and growing market maturity now calls for an easing of the policy: for example, three US airlines fly Los Angeles-Shanghai but among Chinese airlines, only China Eastern flies the route. As is the norm in China (and not just aviation), change will be gradual and in certain areas, rather than being an approach of a sudden open doors policy.

Reform is also needed due to Beijing’s forthcoming second international airport at Daxing, planned to open in 2019. China Eastern and China Southern have agreed to move to the new airport on the condition they can grow significantly – including growth to long haul markets. However, under the existing one airline, one route, policy service would be precluded to most markets since Air China already serves most blue chip international markets from Beijing. The CAAC has generally considered airports in the same city to be co-terminal, and not different “routes”.

Changes to one airline, one route, could result in some overlap on major international flights.

One impact could be that this comes at the expense of secondary routes, assuming a combination of slowing secondary growth and some exits from secondary markets.

But there are many variables in a dynamic domestic market that is still achieving double digit annual growth. and as airlines build hubs to support international flights from new cities.