The growth of China’s “Big Three” airlines – Air China, China Eastern and China Southern – has been spectacular. China Southern’s RPKs have increased from 20 billion in 2000 to nearly 140 billion in 2012. Outside China, the airlines' growth has generally been noticed in terms of international flights, leading to some misconceptions about the sector.

While the Big Three are increasing international flights, they are also increasing domestic services in the same proportion. Domestic RPKs in 2012 accounted for 79% of China Southern’s total RPKs – little change from 2000’s figure of 78%.

This is perhaps baffling to those aware of the huge potential of the outbound Chinese market. While the demand exists, Chinese carriers have failed to capitalise on it – and for good reason. International yields are often significantly lower than domestic yields, and international services are often unprofitable. The implication for the international community is huge: China will continue to hesitate to dispense traffic rights until its airlines have stronger performance, which will enable them to balance foreign growth. But many of the problems are well within their power to solve.

This is the third part of CAPA’s series of outlooks on the Chinese aviation market. The first looked at pending reforms in the sector while the second looked at the opportunities for new entrants, which are increasingly being approved.

International services are growing but a fraction of total traffic 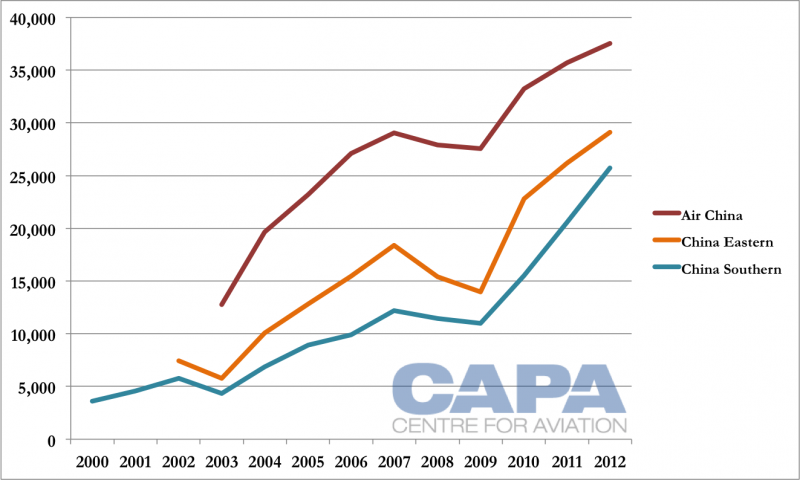 But this growth has come against a larger growth story that primarily concerns the domestic market. 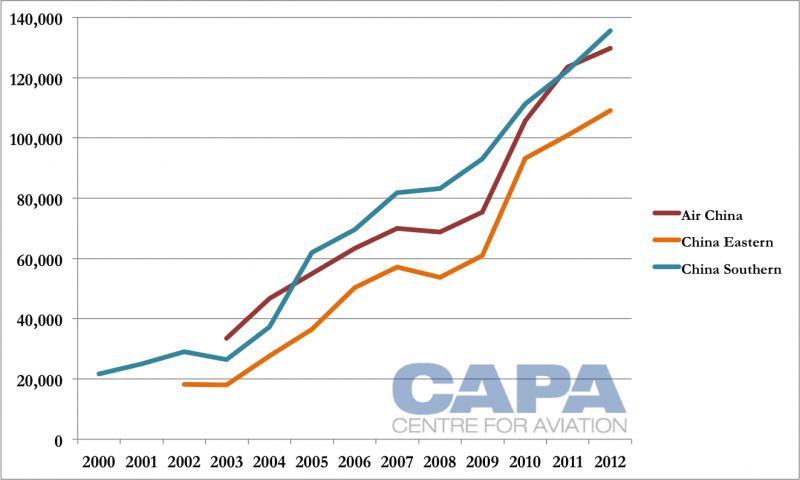 In fact, the Big Three carriers actually have a greater share of their RPKs in the domestic market now than a decade ago, challenging the notion China’s carriers are becoming more international in terms of traffic. In 2012 the domestic RPKs at China Southern comprised 79% of all traffic, slightly up from 78% in 2000. 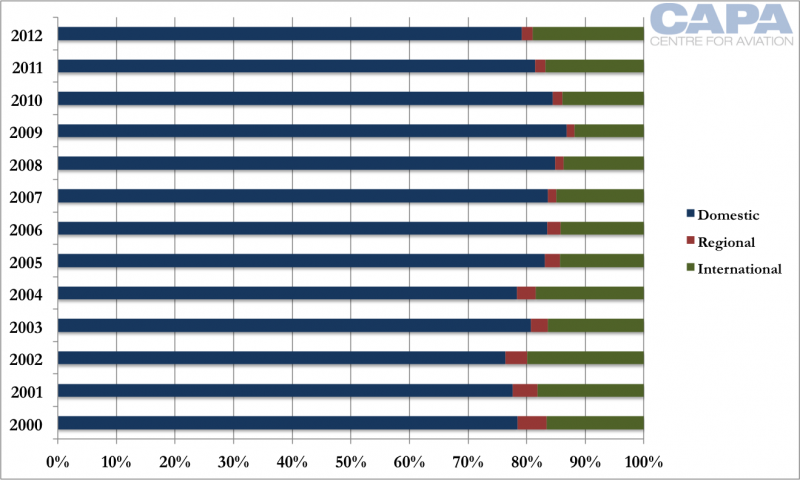 Domestic RPKs comprised 70% of traffic in 2012 at China Eastern, up from 47% in 2002. Driving this, however, is China Eastern’s merger with large domestic player Shanghai Airlines, distorting figures. Also a factor is that China Eastern has largely been deprived of long-haul growth owing to the delay of 787s, which it cancelled and replaced with 777-300ERs, due for delivery in 2014. 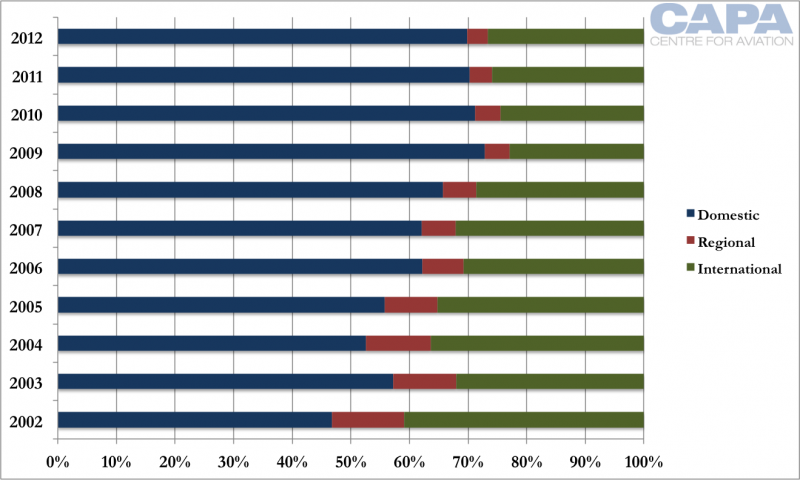 At Air China, domestic RPKs comprised 67% of traffic in 2012, up from 58% in 2003. But in the intervening period Air China launched a number of small domestic carriers and took a majority stake in large domestic carrier Shenzhen Airlines.

Air China reports group traffic, unlike at groups such as IAG and Lufthansa where traffic for individual carriers is given. So while the figures are partially distorted, not to be overlooked is that through acquisitions and launch of new airlines, Air China is looking to bulk up its domestic, not international network. That underscores its domestic focus. 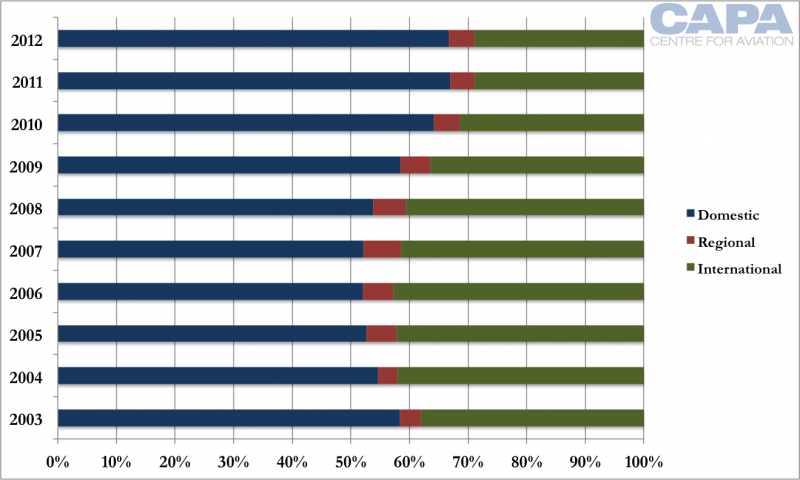 International flights may carry prestige, but the money is in the domestic market. Some incorrectly suggest this is irrelevant since the carriers are state-owned and have a bottomless amount of cash. However, state-owned carriers have to report to the country’s state-owned Assets Supervision and Administration Commission, where poor performance is not treated lightly.

While the domestic market comprised 67% of Air China’s 2012 traffic, it comprised 70% of passenger revenue. Regional markets of Hong Kong, Macau and Taiwan accounted for 4% of RPKs, but given the very high-yielding nature of cross-Strait routes between mainland China and Taiwan, regional revenue accounted for 6% of revenue.

This is shaping growth because China and its airlines largely grow where yields are found. This is not always true as some international routes are launched given their strategic importance. This helps explain why Chinese carriers are much smaller than market potential may suggest.

Between 2003 and 2008 Air China was gradually closing the gap on the difference between international and domestic yields. But international yields dropped sharply in 2009. While there was a recovery in 2010, 2011 and 2012, performance was flat while domestic yields reached new highs.

Driving the international situation is the continued weakness in Europe, where Air China is heavily exposed. 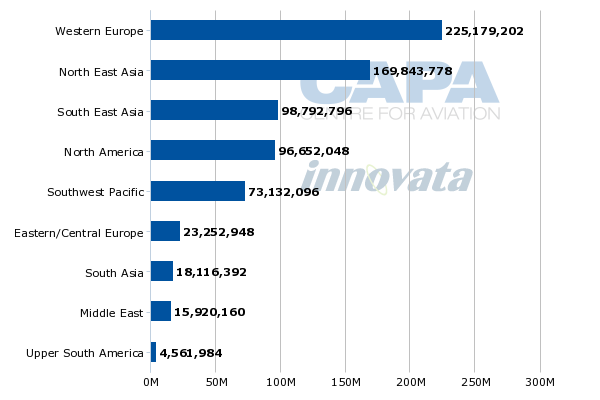 The latter half of 2012 was impacted by a drop-off in traffic between China and Japan, a high-yielding market, due to political issues over contested territories. Some of this weakness has been offset by North America, which is gaining health and where Air China has significantly increased capacity. 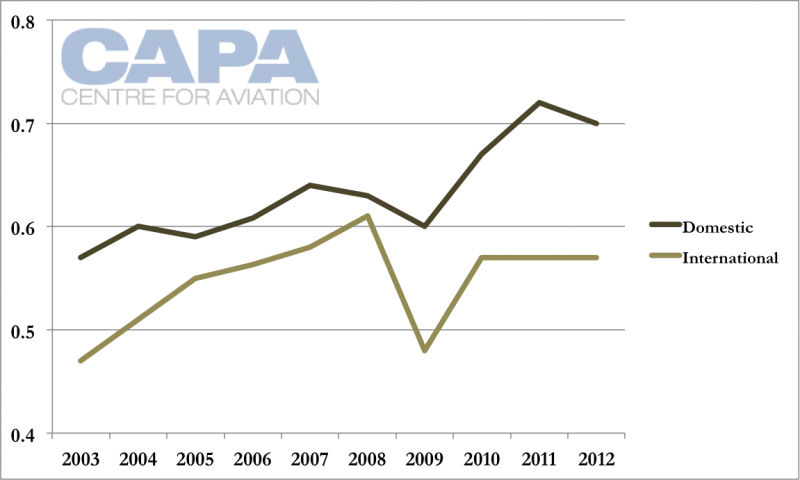 However, Air China’s performance needs to be put in perspective. Except in 2006, Air China has had the highest domestic yields since it reported data. At the same time, its international yields are often weak or are the weakest. 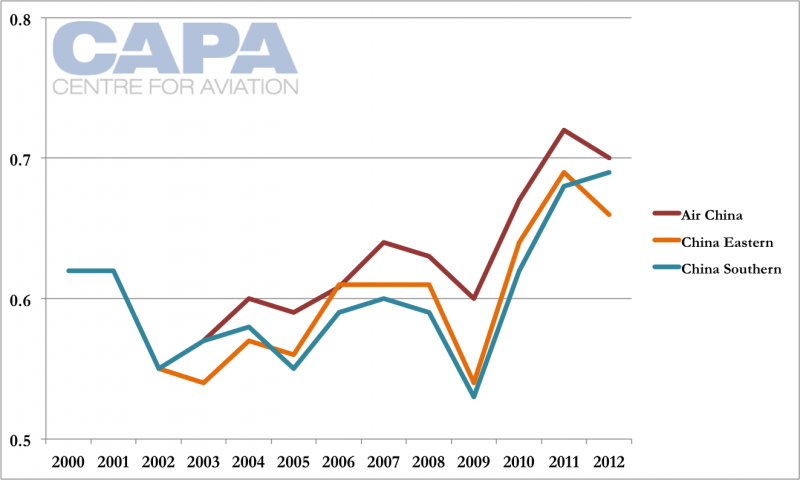 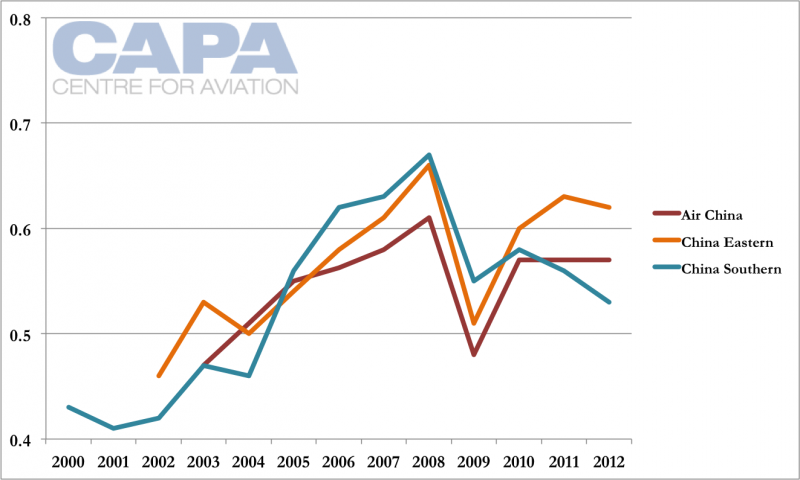 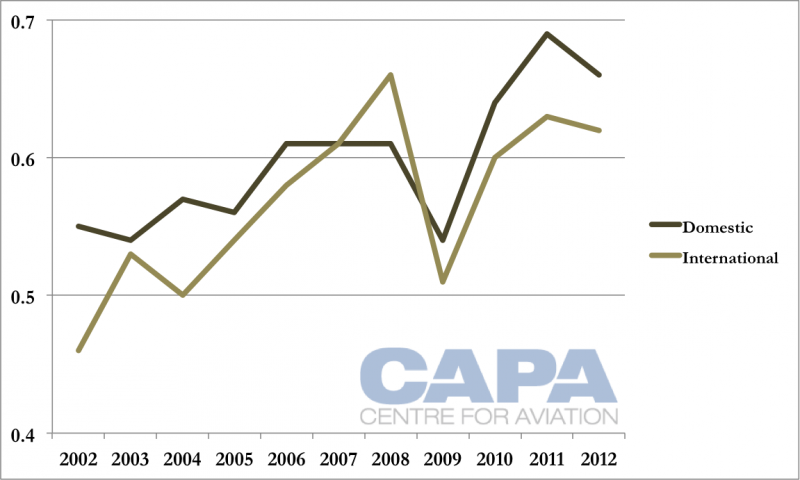 International yields between 2002 and 2012 have grown faster (35%) than domestic yields (20%), consistent with the trend at Air China and China Southern.

China Eastern is relatively isolated from long-haul operations due to its limited long-haul fleet. This will change starting in 2014 as China Eastern takes delivery of 20 777-300ERs, replacing A340-600s and then providing for growth. 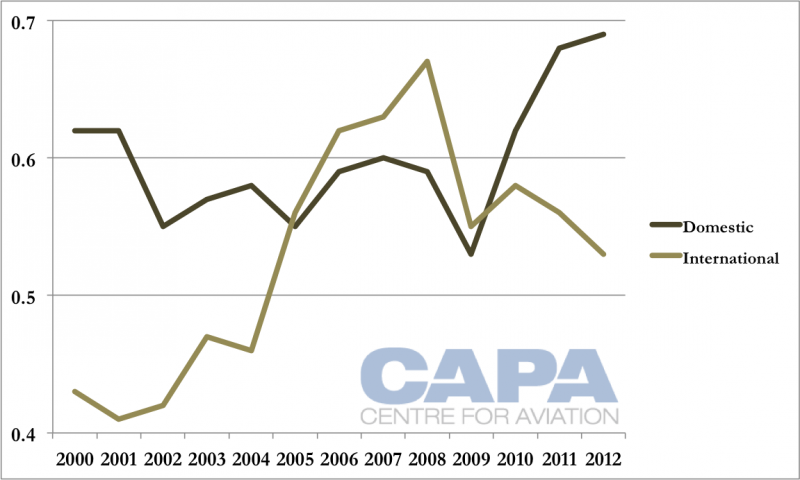 China Southern has flagged its rapid international long-haul push is over, but there will continue to be long-haul growth. Unfortunately for China Southern, given its position in Guangzhou, weaker than Beijing or Shanghai, this growth will take a while to mature.

Significant work is required for Chinese carriers to improve their international performance. "Hard" product in particular is rapidly improving - for example now with China Southern's A380 configurations and "soft" service is also moving, unsteadily, in the right direction, but there is still a long way to go. Marketing and distribution are challenges as international marketing often sounds off-key, brand awareness is low and internationalisation is low. For example, international websites of China’s carriers are basic, advertising is often misguided and, not infrequently, lacking in language skills.

Shortcomings like this (and everybody has a story to tell about odd marketing expressions often used) is simply inexcusable. But reluctance to spend small dollars on foreign marketing companies is costing Chinese airlines millions of dollars in image and brand relevance; how can anyone take an airline seriously if it is not prepared even to understand its foreign market and speak the same language?

This is a great pity, because it is undermining often major steps now being made operationally and in hard in flight product.

Chinese carriers have exceptional ties with their local market, but they cannot rely solely on the outbound market for international loads. This is particularly telling, as inbound markets have greater high-yielding demand, especially for business travel. Here though the soft product has a long way to go - and again there often seems to be a carelessness about learning from the competition. Extrapolating from domestic experience is not enough.

To attract and retain business travellers requires more than price competitiveness and for regular travellers the little things mean a lot. So, for example, while it seems trite, little things like offering a long haul business class passenger simply a choice between a red or a white wine becomes part of the discussion when Chinese airlines are raised. Where certain levels of expectation are created, falling short can mean the difference between seeing that business traveller again - or not.

There are more fundamental issues to address too, mostly not really so difficult to solve. Marketing and sales in foreign destinations - essential to achieving the inbound growth - tends far too much to be kept in-house, with often a continuing reluctance to work with reputable local operators. This seems largely to be about penny-pinching; if it is merely that, it is costing huge amounts in lost potential revenues. Without a powerful brand, distribution is undoubtedly made that much more difficult, but it is the major bridge to cross, yet there is no willingness to tackle it head on. As long as many key decisions are taken back in head office with little or no reference to local offices, this is unlikely to change.

Again, it is understandable that central decision making is a reflex, where mistakes can be so costly. But that is a reflex that needs to be addressed with logic - and, perhaps riskily too, because innovation is rarely rewarded if it fails to deliver - and with a willingness to learn from competitors.

Until international fortunes improve, bilateral access for foreign airlines will be limited

This scenario has global implications. China is no different from other nations in wanting a prosperous future for its airlines and for the airlines to carry sizeable amounts of traffic. But with its own international airlines' performance being weak, the incentive to grow international markets is being constrained.

This in turn makes China reluctant to expand air traffic rights for foreign carriers. Already China diligently notes the many markets in which its carriers have lower capacity than foreign counterparts. There are some exceptions. There is pseudo-open skies between China and Japan, a market pairing where Chinese carriers have greater potential given their lower cost base compared to bloated Japanese carriers.

There is a push for liberalisation with Taiwan, but Taiwan is fearful of giving Chinese carriers greater access without Taiwanese carriers being able to secure slots at the key and constrained airports of Beijing and Shanghai.

An open skies agreement exists between Korea and the Chinese provinces of Hainan and Shandong, both large tourism areas. Shandong is also home to many Korean companies, so greater air traffic brings immediate economic benefits elsewhere. But China is hesitant for further liberalisation. It views Asiana and Korean Air as formidable. Indeed, the two are the second and third largest foreign carriers in China (after Dragonair) and carry substantial transfer traffic that Chinese carriers could theoretically one day carry themselves.

How fast and how far to liberalise is becoming the key dilemma for Beijing. To inhibit inbound growth is costly to the economy; and for example Air China is at a substantial disadvantage to its other Star Alliance partners across the Pacific in not being able to join the metal neutral joint venture around ANA and United. That is made possible thanks to the (nearly) open skies agreement between the US and Japan. As long as China is not prepared to agree to such a liberalisation, Air China is excluded from the JV club - making an already significant disadvantage even greater, perpetuating a vicious circle.

Meanwhile international carriers are finding they can curry favour by addressing some of the underlying problems: lack of experience owing to Chinese airlines being far younger than international counterparts. This has led to such strategic partnerships as KLM with China Southern, Delta with China Eastern and Lufthansa's longstanding partnerships with Air China. (Air China also has a significant partnership with Cathay Pacific, but in this combination the two partially own each other.)

So while there has been international growth, domestic growth remains the focus. Plenty of international opportunities are still left unturned, a direct result of the emphasis on domestic growth, and with global implications. The international situation will of course one day change, but all signs point to this being a very gradual process.