In China’s aviation system, the impact is amplified since growth is planned years in advance and adjusting growth is difficult. Accentuating the situation is the fact that, unlike recent years, GDP growth has slipped from double digits to single. But there are new forces at play.

Passenger demand has naturally decreased as GDP growth declined (and for other reasons too), but Chinese carriers have found few levers to pull to adjust to the situation. State-owned carriers have volume targets to meet in order to fulfill their obligations as economy drivers. The resulting passenger growth is generally occurring at the expense of declining load factors and yields.

This makes for an inefficient business and an exceptionally challenging job to manage an airline with the contradictory goals of running a sustainable business while needing essentially to put volume growth first and foremost.

Some correction is in order, and growth in 2014 may start to slow, reflecting the slowing – but still expanding – Chinese economy.

This may offer a welcome reprieve for the airlines, especially the state-owned ones, which have become exhausted with the work entailed in producing double-digit growth year after year, with limited resources.

At home, staff efficiency is low and differentiation is limited. While some foreign markets have been shocked by the sudden expansion of Chinese carriers, international services – either implementing them or supporting them – do not fully capture the attention of management. Sichuan Airlines for example now flies to two routes to Australia but lacks an English website, thus confining the market to Chinese ethnic sales, despite the opportunity for sixth freedom operations through to Europe.

There is another challenge emerging now too. Along with the changes to their existing businesses, airlines will need to respond to the new opportunity – and explicit request – presented by regulator CAAC to foster low-cost carriers. LCCs, the thinking goes, will jump-start new growth opportunities.

This is to be expected given central planning that still largely dominates the economy in the form of five year plans around which growth targets, including aviation and associated aircraft intake, are planned. Making changes during the currency of plans is difficult, a problem China has been grappling with.

Cruising altitude at the Big 3 – Air China, China Eastern, China Southern – is being adjusted. Just like a flight, it has required some turbulence to force the change. After a decade of relatively strong double-digit passenger growth, the Big 3 in 2007 experienced slowing growth, although only Air China of the three had growth in the single digits.

The next year, 2008, was the annus horribilis for Chinese aviation as the global financial crisis and China-specific influences wreaked havoc on the domestic market. China Southern had low single-digit growth while Air China and China Eastern carried fewer passengers in 2008 than 2007. The year, however, was considered an anomaly. A return to double-digit growth in 2009 and 2010 helped to wipe the memories away.

Forecast growth of 13% ended up being 9%. While 2012 started out looking upbeat, it slowed in the latter half as the market cut travel while the once-a-decade leadership change, (which formally took place in Mar-2013) and resulting new policies, unfolded. Spring Airlines for one missed its target to carry 10 million passengers in the year.

Confidence was slower to return, delaying a rebound. Unexpectedly the new government in short order cut political officials’ excesses, as they were perceived to have drawn the ire of the masses and pose a threat to stability. Along with multi-course banquets being shortened to a few dishes and a prohibition on expensive liquor, premium travel (much of it government-linked) dipped by 10-20%. Premium travel is not as comparatively high-yielding as in other markets, but it was nonetheless an important revenue source.

By mid-2013 lack of clarity still reigned. Some saw the frugality as a temporary measure to stir public sentiment that would, at best, creep back or at worst be applied at the whim of individual provinces. As the year drew to a close, opinions had shifted to an acceptance that this new atmosphere might be in place across the board for the long term. For emphasis – and surely not as a practical measure – one major airline’s chairman is understood to have been limited to three international trips a year. Slowing growth has become a worry superseded by the question of how to respond.

Airlines that once toed the line have started to show signs of frustration; they are in an impossible situation. The top-level figures most often published and cited show positive signs. Domestic traffic growth in 2013 at the major airlines was in the high single digits or low double digits. However, the brunt of the battle is being reflected in lower load factors and yields, which are reversing years of commendable improvement – and hampering the path for further gain.

After improving domestic yields from RMB0.57 in 2003 to RMB0.69 in 2012, yields in 1H2013 (latest data available) declined nearly 12%. This was largely due to an accounting change with respect to taxation, but even normalising this, there was a decline to around the mid-to-single digit growth.

China Southern fared well; Air China and China Eastern showed declines, not improvements, in their 2012 domestic yields. Air China’s domestic yields in 1H2013 fell 14%, again partially due to the accounting change, but this was offset by a 1ppt gain in load factor.

China Eastern’s performance was moderate with load factors flat just below 80% and 1H2013 yields down 6%. But given China Eastern’s more sluggish performance – it had the lowest domestic load factors and yields of the Big 3 in 2012 – perhaps it had less to lose. If so, China Eastern was able to offset the downturn by improving efficiency whereas Air China and China Southern had already made those gains.

Declining yields and load factors would normally initiate a process to adjust growth, but as Chinese carrier executives are at pains to point out, commercial measures do not apply to them. The state’s distribution of new aircraft is rigid without allowing short-term flexibility to adjust capacity intake, creating a lag between when growth slows and when a response can be implemented.

China is sometimes thought of as endless growth for aeroplanes, but there is substantial aircraft retirement. For 2013, China Eastern planned to take 56 new aircraft but retire 14, including nine A320s/737NGs, growing the number of passenger aircraft by 10%.

Air China has been more aggressive, taking 32 new aircraft in 2012 but retiring 19 for net growth of 13 aircraft – also, like at China Eastern, 10% expansion. There were 12 new aircraft and nine retirements in 1H2013, at a much slower 1% growth rate. Aircraft details further show the declining growth: it is mainly short-haul aircraft being retired while there are large intakes of widebody aircraft used mostly, but not exclusively, on long-haul services.

Staff changes have been largely impossible at state-owned enterprises. After accumulating a bloated middle management, airlines – short of much-needed but unexpected government reform at SOEs – have to wait for attrition or to grow with only headcount increases in operational staff while gaining back-office efficiency. It is a worthwhile approach, but the impact minuscule and offset by growing wages as China becomes wealthier – especially along the coastal region, where most airlines are based. 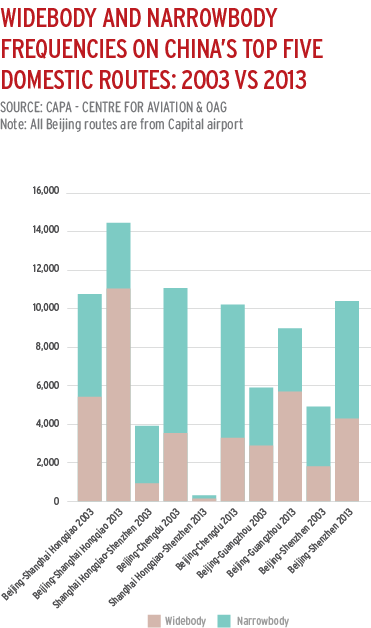 It is not that the airlines do not want to grow. Indeed, they have a wish list of what new services – by the hundreds, possibly thousands – they would like to implement. The problem is the paradox of there not being slots on profitable routes while there are available slots on unprofitable routes.

Beijing Airport, China's most congested, says it is running at about 90 movements an hour

But if weather conditions (often a euphemism for air traffic management) were better, hourly movements could increase to 114 – a very optimistic 27% increase.

Up-gauging has already occurred: Air China and China Eastern hardly have any narrowbody services between Beijing and Shanghai Hongqiao, the country’s largest route where 75% of flights are operated by widebodies, up from 50% in 2003. Other top routes have also experienced growth in widebody frequencies. 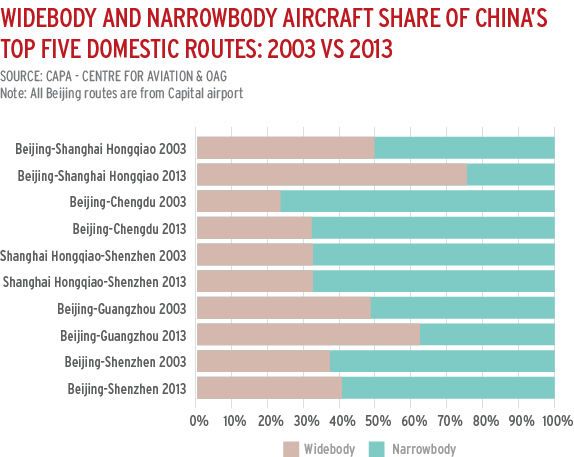 Shifting capacity to the international market is not the answer, at least not yet. Domestic RPKs at China Southern accounted for less than 80% of total RPKs in 2012, unchanged from 2000. Domestic RPKs at Air China and China Eastern in 2012 actually increased to 65% and 70% respectively, up from 55% for both in 2003. There are many growth opportunities, but lack of international experience holds the airlines back.

Airlines want to slow growth but the implications spread beyond their operation to national goals, delicate matters considering the national pride issues at play – and rightfully so considering they represent tremendous growth and achievement. 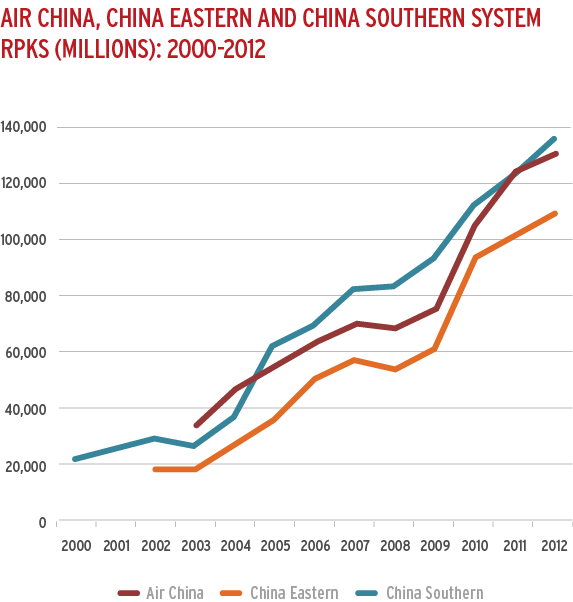 In 2011, when China last issued its medium and long term growth proections, the growth seemed unstoppable

The CAAC projected its airlines would carry 450 million passengers a year by the end of 2015 across all markets. That seemed to require only conservative growth.

That objective is in risk of falling short. To reach the 450 million target, about 12% annual growth is required. This is challenging with current growth rates, and moves further out of reach once considering the airlines will likely make headway in 2014 and be permitted to grow in the single-digits.

The next two years will be bellwethers for what can be expected in the next five-year plan commencing in 2016. As aviation experience has shown, much can change in two years. For one thing, adding new components – more private carriers, LCCs – introduces further complexity to the equation.

The hope will be that the signs of some market liberalisation will serve as aviation’s caffeine jolt. The rationale is tidy: new private carriers, especially LCCs, will be lean and able to create new growth, as aviation has witnessed in countless other markets.

Implied in this is the proposition that the existing crop of carriers – mainly the state-owned Big 3 – cannot achieve similar growth. They are weighed down with inefficiencies that increase their cost base – and thus pricing ability – and are unable to make structural changes. Allowing new airline entry meshes with the central government’s strategy of moving to an open market but, viewed another way, it is in policy terms the low-hanging fruit.

It is easier to allow new carrier entry, which overall will have a small share of the market, than to implement deep structural reform at the Big 3. Change would take numerous years or occur carrier-by-carrier; the bandwidth for this type of reform is limited. To achieve substantial efficiencies, staff reductions at each carrier would be numbered in the thousands. Headlines blared of Japan Airlines’ plan to cut 16,000 employees in bankruptcy; China could experience that a few times over.

A restructure would allow the Big 3 to grow and have considerable scale that 20-fleet airlines could not. China’s population is large, but there is already discussion of the available workforce peaking. SOE reforms seem even more elusive than air traffic management reform, which airlines are already pessimistic about.

The Chinese domestic aviation market has reached an inflection point

Airlines are ultimately viewed on their own merits but they are also renowned for their ability to stimulate economic activity. Airlines are among the greatest drivers of the economy.

But focusing more on sheer growth rather than sustainability has created inefficiencies that emerge at the worst times: when slots restrain growth and demand and supply move out of sync.

Introducing new private carriers can become the easy solution, but the solution comes with a price attached: that is that they need to be sustainable, not merely exist as a means to achieving a policy goal.

At the very least, new entrants will make a contribution to growth. At best, their example will allow existing carriers to reform and then pursue further growth. At least one has already moved to adopt an LCC subsidiary.

The Big 3 airlines control most of the market and, with it, future opportunities. Their task will be to welcome competition and use it to reform themselves, become more efficient and stimulate their own growth.