The international growth of Chinese airlines is increasingly evident. Air China will have upwards of three daily flights to Los Angeles; China Eastern has received investment from Delta Air Lines; Xiamen Airlines will launch four long haul routes in 10 months; and Hainan Airlines has invested in airlines as far flung as Brazil and South Africa. Closer to home, visitors from China are the number one source market for many Asian countries and growing fast.

Chinese airlines have been growing at double digit rates in international and domestic markets for a number of years. It is only in recent times that international growth has taken its place in a structural shift where international gains more prominence.

In 2016 Air China could fly more internationally than domestically. China Southern has increased international's share of capacity from 27% in 2014 to a projected 34% in 2016. Chinese airlines are realising their potential, are benefitting from increased outbound travel demand and are being pushed by the government to grow internationally. Yet as much as Chinese airlines have already had an impact, there is no sign that they have yet reached their peak. The growth of international traffic on Chinese airlines in the 12 months of 2015 was the same as in the previous three years combined.

For example, Chinese airlines are now larger than their US counterparts in the China-US market. 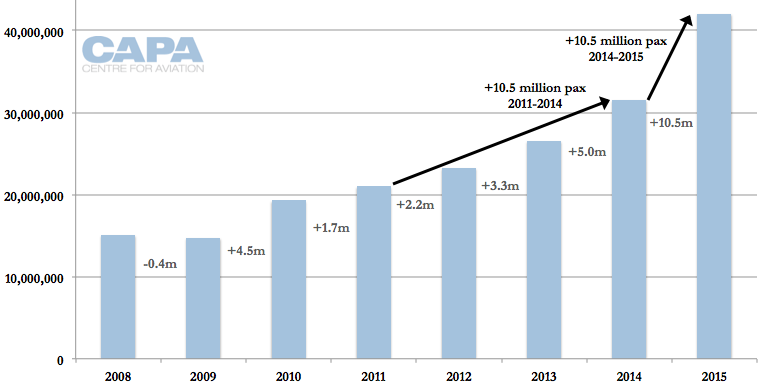 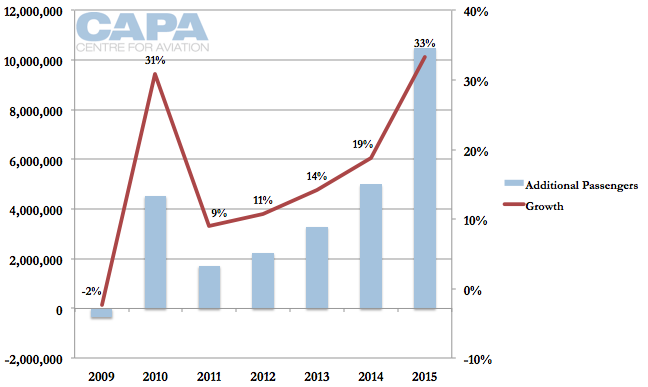 As impressive as the international growth may seem, it still represents the minority of traffic to/from/within China. At the same time as a doubling of international traffic over four years, domestic traffic has also grown but received far less attention. As a result, international's share of mainland China passenger numbers grew to only 10% in 2015. 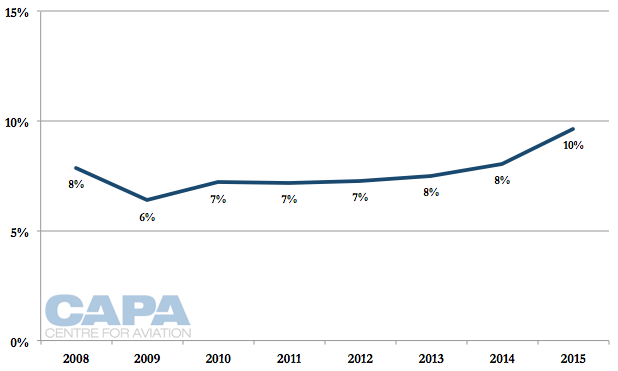 International and regional passengers in China and their share of mainland China traffic: 2008-2015 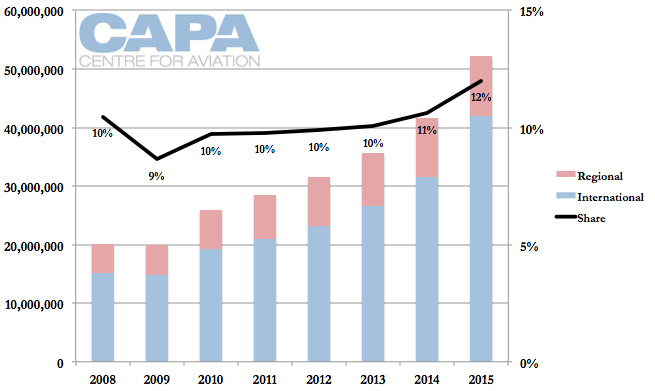 International and regional traffic together constitute a low double-digit share of total traffic. However, the share is significantly larger at the major domestic airlines, which are also the biggest internationally. The Big 3 – Air China, China Eastern and China Southern – comprise groups/holding companies containing the flagship airline and also a growing number of smaller airlines.

Yet despite the incorporation of data for primarily domestic airlines international exposure has increased this decade, with noticeable increases since 2013. For Air China Limited and China Eastern Holding, the 2015 international exposure is lower than in 2006 and at other past points, but again this comparison brings cautions in its interpretation. 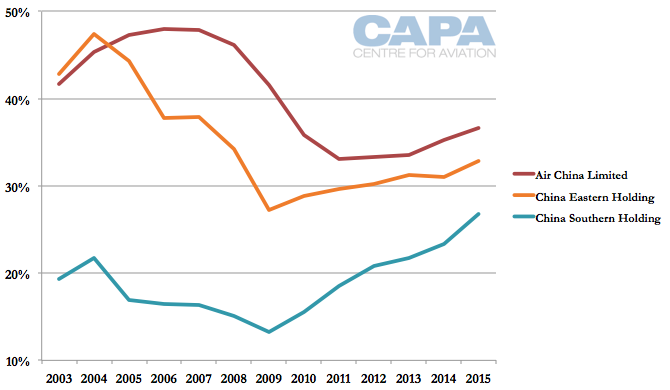 An alternative evaluation of international (including regional) exposure is the share of capacity from the three airlines, leaving out other airlines in the group/holding company. (This data is from OAG and is reliant on the airlines filing accurate schedules). From it there are similar conclusions: international exposure dipped after the Global Financial Crisis and has been increasing in recent years. For Air China, China Eastern and China Southern, international exposure is at record highs.

China Southern has also been expanding in Europe and North America, and in regional markets. 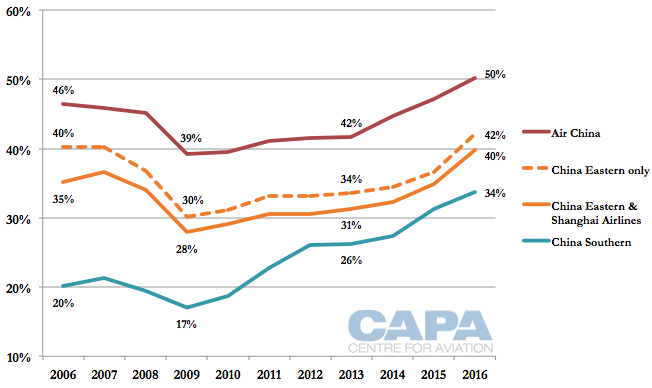 Air China is the largest international Chinese airline, but China Southern has standout growth from 2010 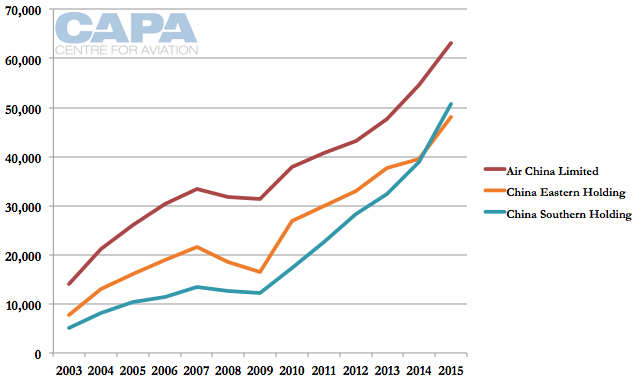 As impressive as Air China's international growth has been – a doubling since 2009 – China Eastern Holding and China Southern Holding have grown faster, evident on the chart by the gap narrowing between them and Air China. Creating an index of group RPKs (2010=100), China Eastern has grown marginally faster than Air China.

This is from a lower base, and China Eastern's Shanghai hub has not been as severely congested for so long as Air China's hub, where it is limiting international growth. The standout is China Southern Limited, whose 2015 RPKs are nearly three times greater than in 2010. 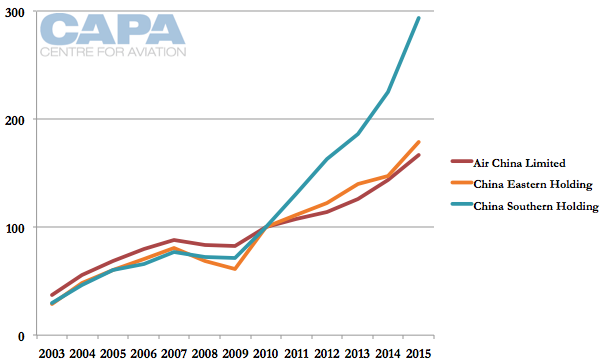 Internationalisation of Chinese airlines has yet to reach its peak

There is no sign that this pivot towards international markets is reaching its peak. Chinese airlines are realising their potential. They have been emboldened to a degree by an increasingly improving on-board product and growing partnerships.

Delta's stake in China Eastern has brought the airline greater awareness in the US. On 23-Mar-2016 Air China and United, distant partners, announced closer cooperation that will "prepare both companies for future joint opportunities" – which could be interpreted to mean a joint venture, once that becomes possible under the regulatory framework. Air China has a growing number of JVs in place or in works, and likewise for China Eastern. China Eastern has confirmed talks with Etihad Airways about a partnership.

Hainan Airlines, privately owned and not one of the Big 3, could be the reported bidder interested in Virgin America.

Such a move would greatly accelerate Hainan's expansion in the US market, which Chinese airlines regard as their biggest long haul opportunity.

There have been a dozen start-ups in the short haul space in China in recent years. These companies are starting to move beyond domestic flying. Loong Air with 14 A320s and a desirable base in Hangzhou, was approved on 23-Mar-2016 to expand its business scope to international flying. CAPA in Nov-2015 identified 10 Chinese airlines to have been publicly linked to widebody operations. Since then, two more airlines – Juneyao Airlines and Okay Airways – have been linked to widebody operations, likely to be used eventually for long haul flights.

The international growth of Chinese airlines is reshaping international markets and delivering significant tourism benefits. Fortunately for many parties in the realm of aviation there is no indication of the peak being reached.