China's airline traffic at Xi'an, Urumqi, Chengdu and Chongqing to be boosted by "Silk Road Plan"

China's "Go West" economic drive continues to deliver results as United Airlines becomes the latest international carrier to open service to China's west via a 787-8 service from San Francisco. Much growth is still to be unlocked from the growing economic prosperity of Chengdu and neighbouring Chongqing, but now Beijing is considering a new economic development plan that will boost the economy, and ultimately air services, of other regions.

The so-called "Silk Road" plan focuses on areas outside of China's eastern coast that has seen strong economic growth. Many of the regions under the "Silk Road" plan were former posts on the historic Silk Road. This includes Xi'an, the eastern terminus of the Silk Road, which is already experiencing international and long-haul growth. Xi'an's only scheduled (albeit seasonal) long-haul route is from Finnair, which launched service from Helsinki in summer 2013. China Eastern plans to launch Xi'an-Moscow service while Hainan Airlines will launch a Xi'an-Paris service.

Chengdu and Chongqing are also expected to fall under the "Silk Road" plan, ensuring growth continues there. Urumqi, already a hub for West Asia, will also likely feature in the plan and continue to grow. New regions including Gansu (home to Lanzhou) and Tibet (Lhasa and Xining) will also likely benefit, boosting their international services.

Xi'an is likely to receive most inter-continental growth

Xi'an, the capital of Shaanxi province in Northwest China, is the home of the Terracotta Army and China's aerospace/defence sector. While the Terracotta Army brings in tourists, it is not on the level of a Beijing or Hangzhou, while Xi'an's aerospace and defence sector has the objective of boosting Chinese companies' role in the field, limiting the need for international flights. So the Silk Road plan brings a decidedly worldly bent to an already prosperous city.

A USD7 billion Samsung chip manufacturing plant for Xi'an has been much lauded as a sign of the city's potential for further large international projects, which it aims to attract with its high-tech zone. Xi'an airport international seat capacity by country: 23-Jun-2014 to 29-Jun-2014

Xi'an is about two hours from both Beijing and Shanghai and about 97% of its seat capacity is in the domestic market. 92% of international seat capacity is to North and Southeast Asia. China Eastern has a hub at Xi'an and is the largest carrier ranked on system seats as well as domestic seats. China Eastern is twice the size of the next largest carrier, China Southern. 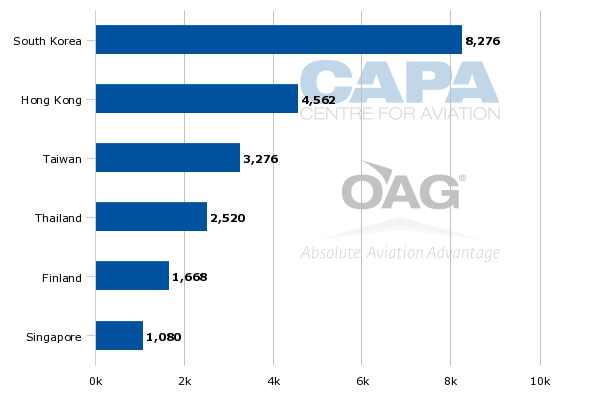 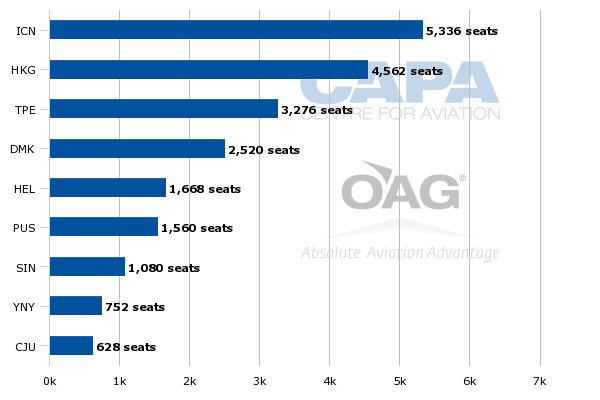 In Jun-2014, Xi'an gained two new routes to points outside North and Southeast Asia. From 01-Jul-2014 China Eastern is opening a twice weekly service to Moscow while Hainan Airlines will open a twice weekly A330-200 service to Paris (the service originates in Hangzhou).

Hainan Airlines had tried to link Paris and China via its French subsidiary Aigle Azur, but Russian overflight rights could not be obtained and the service has been deferred. China Eastern has five weekly flights to Moscow from Shanghai Pudong while Hainan Airlines does not serve Paris; its limited European network has been served from Beijing.

Urumqi is the capital of Xinjiang in China's far west; it is about two-thirds of the way from Beijing to Moscow. Urumqi is only approximately 800km (500 miles) to Almaty in Kazakhstan but some 2414km (1500 miles) to Beijing. Unsurprisingly it is West Asia that takes the international focus at Urumqi. Like other Chinese airports, Urumqi remains a heavily domestic airport: 94% of seat capacity is in the domestic market.

China Southern is the largest domestic and international carrier while Air Astana is the second-largest international carrier. Air Astana sees itself as a hub carrier for West Asia and benefits from geographical proximity to China as well as political and economic ties. The China-Kazakhstan air service agreement has been expanded while China has made investments in Kazakhstan, notably in the resource sector.

For Air Astana CEO Peter Foster, investment in China is the result of “a fluke of nature and a fluke of geography”. The border between China and his airline’s home country Kazakhstan is one of the longest land borders in the world and Kazak natural resources are a target for investment by its neighbour. “Chinese involvement in extractive industries has grown massively,” he noted, adding that this is a “geopolitical issue”. This has also helped to motivate the interest China shows in Africa that Ethiopian’s Mr GebreMariam highlighted.

Moreover, according to Mr Foster, Chinese organisations bring people in numbers when they invest. “This is good for airlines”, he noted, although it is “not always good for the investee country… it can lead to visa retaliation issues”.

Mr Foster sees significant potential in northwest China, the closest part of the country to Kazakhstan. “Traditionally, south and southeast China drove economic growth, leaving a gap in northwest China… The Chinese government is now trying to spread the wealth there”. Air Astana flies to Urumqi, the capital of Xinjiang province in northwest China, in addition to Beijing (and Hong Kong).

Unlike Emirates’ Mr Clark, Air Astana’s Mr Foster has no problems with access to China after capacity to Kazakhstan was trebled in recent years. Moreover, Air Astana can fly anywhere in China, can reach almost the entire country with next generation narrowbody aircraft and there are no restrictions on sixth freedom rights.

As Mr Foster puts it, his carrier is based “slap bang in the middle between north and southeast Asia and Europe”, providing Air Astana with a major opportunity. 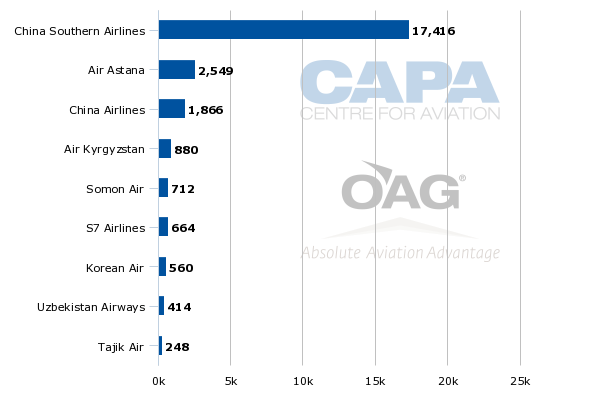 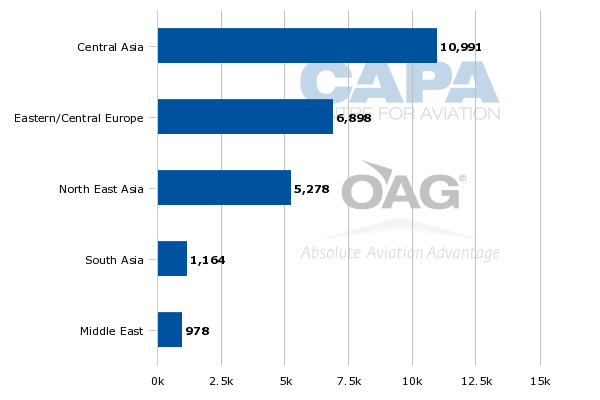 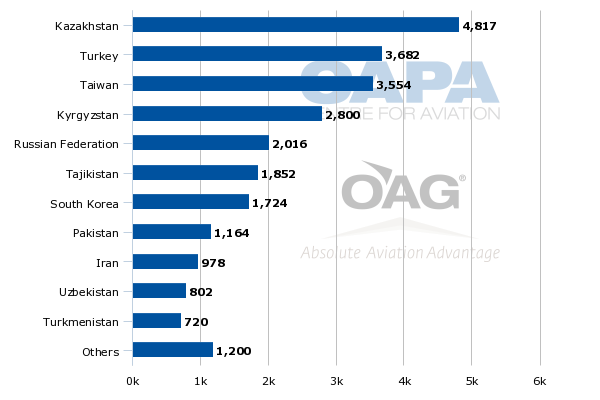 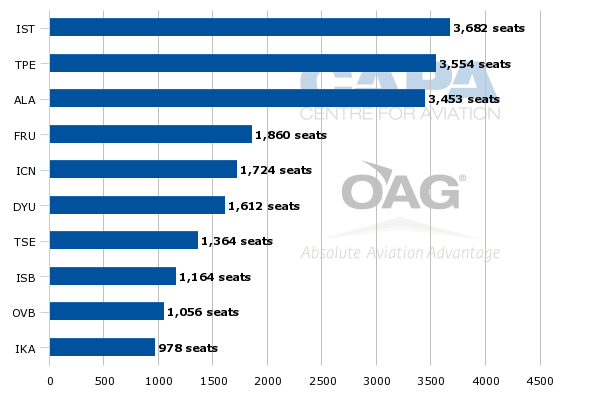 Other airports in Xinjiang province could attract international service. Despite its low-profile Xinjiang is large and distances between cities are long given the sheer size and limited transport infrastructure. Urumqi acts as the hub for the region, but with growth over the long term there will be demand for direct services to smaller cities, such as Kashi (which in Jun-2014 only has domestic flights).

Xinjiang accounts for one sixth of China's landmass and its 1.6 million square kilometres makes it about the size of Iran or Mongolia, or a bit smaller than Mexico.

Xinjiang has experienced growing incidents of terrorism, which Beijing is looking to quell through various means including economic development and tourism. The South China Morning Post reported Beijing has offered RMB500 (USD80) to Chinese tourists who visit Xinjiang, and this has generated modest increases in domestic tourist figures.

Chengdu and Chonqing to continue to be western China hub

Chengdu and Chongqing are reportedly two destinations to be on the Silk Road economic development plan. Both cities (Chongqing is technically a municipality) have experienced large growth as they have been at the centre of China's "Go West" economic development plan. The launch of a large number of intercontinental routes at both airports is despite the two being 276km (172 miles) from each other. Chengdu especially is known to have very favourable incentives. 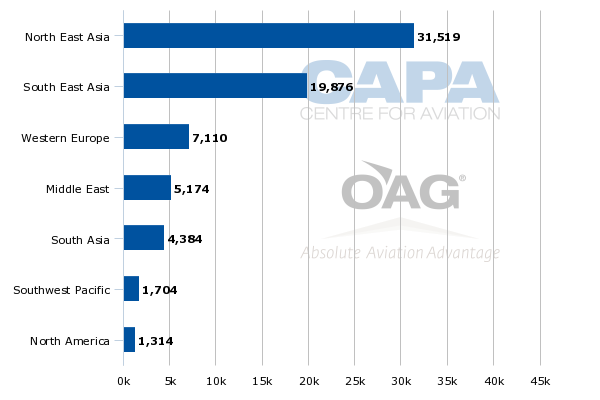 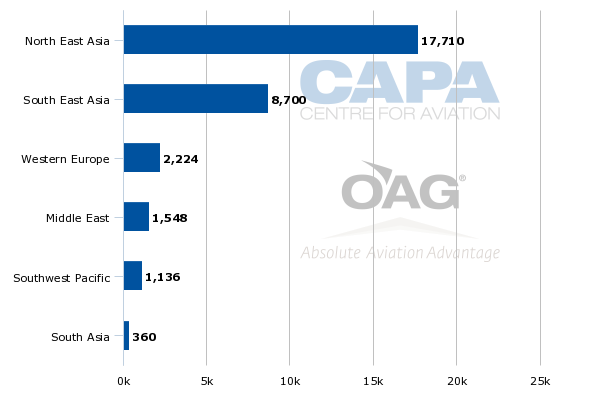 At both Chengdu and Chongqing the largest countries/territories for international seats are Hong Kong, Thailand and Taiwan. Both Singapore and Korea feature in the top 11. 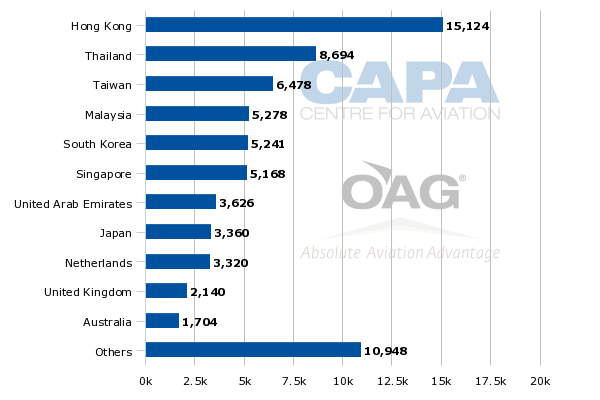 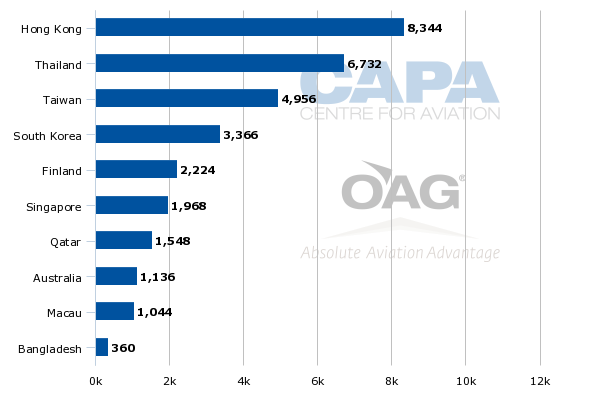 Gansu and Tibet are also due to feature on China's Silk Road economic plan. Lanzhou is the capital of Gansu while Lhasa is the administrative capital of Tibet and its second-largest city; Xining is the largest and has a larger airport.

Short-haul international services are the most likely developments for these smaller airports, with long-haul flights a much longer-term objective. At the end of 2012, annual passenger throughput at the three airports was under five million, although the airports are recording fast growth.

Airlines are being encouraged to expand (or partner – Air China has a stake in Tibet Airlines) while airport construction and expansion is occurring in the region, as it is across the country. 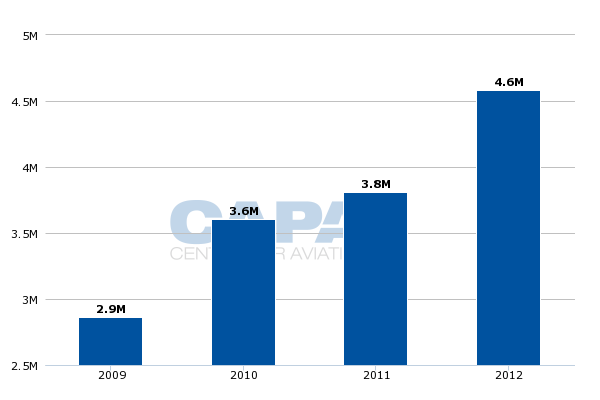 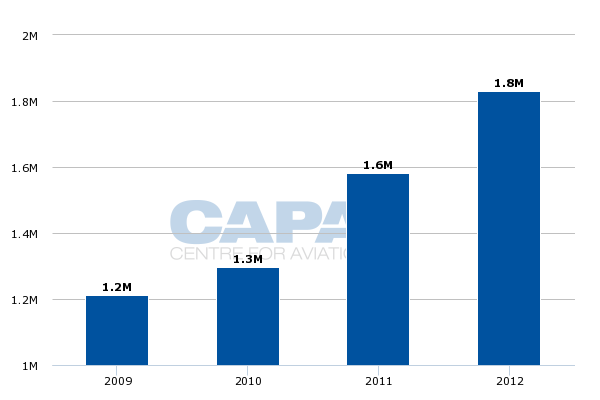 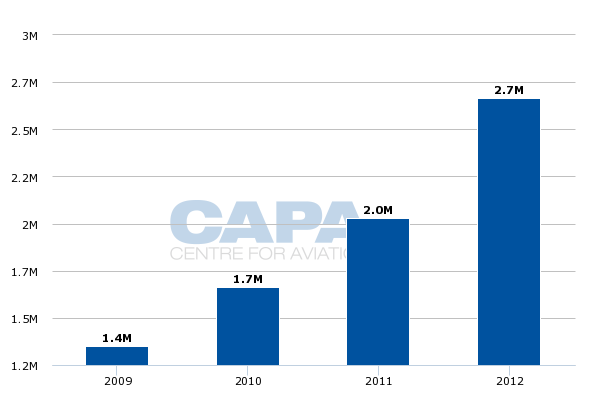 The Silk Road plan should generate growth as 'Go West' did

As is to be expected, details remain to be worked out for the Silk Road economic plan, but the concept appears sound.

Even if there are political overtures, the drive will result in demand for air services through growing economies and/or incentive programmes. Chengdu and Chongqing have experienced this and will continue to do so.

Meanwhile other airports like Urumqi and Xi'an will see formulated economic plans support air expansion, which they have already demonstrated themselves capable of achieving.