Thai Airways' shares have enjoyed a strong rally recently, but slumped 5.2% on Friday (28-Aug-09). The carrier stated it is experiencing improved and higher than expected load factors this month (currently at 76%).

The carrier added that load factors are expected to be 'stable' in Sep-2009 through to Dec-2009 and it is confident of achieving EBITDA of between USD742 million and USD890 million for the full year. The carrier also stated it is considering raising capital to improve its balance sheet, as part of its restructuring plans, with a final decision to be made in Dec-2009.

Hainan Airlines, meanwhile, was stable on Friday, before the release of its 1H2009 financial today. The carrier reported a net profit of USD26 million (-43.7%) and an operating loss of USD222,000 (compared to a USD43 million profit in the previous corresponding period). The carrier transported 8.1 million passengers in the period, a 13% year-on-year increase, with the carrier going against the norm and reporting slight growth in cargo volume.

In other financial news, Taiwan's EVA Air (-0.1% on Friday) reported a USD52 million operating profit in 2Q2009 and a USD51 million net loss, an improvement from losses of USD153 million and USD181 million in the previous corresponding period, due to gains from its fuel hedging contracts. Revenues slumped 27% in the period, although operating costs fell at an even greater rate, down 31%. 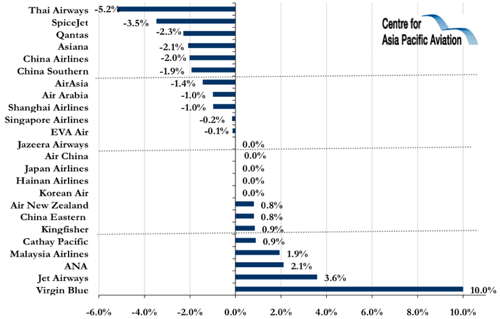