To Shenzhen, or not to Shenzhen? That is a question facing China Southern Airlines as it prepares its long term hub strategy: whether the Guangzhou-based airline should continue growing in the nearby city of Shenzhen, or should concentrate its southern hub exclusively in Guangzhou.

In the upcoming peak season Guangzhou will account for 85% of China Southern's long haul departures. That includes, for the first time, 20 intercontinental Guangzhou departures in a single day. Shenzhen is part of China Southern's catchment area, but Shenzhen Airlines and its majority owner Air China plan to expand in Shenzhen, and competition continues in nearby Hong Kong.

As China Southern weighs its Shenzhen presence, and awaits regulatory clarity on where it can grow at the new Beijing Daxing airport from 2019, the airline intends to take 20 787-9s in the compact period of 2018-2020. China Southern operates 10 -8s, while its sister company Xiamen Airlines is due to receive its first -9 in Dec-2016. China Southern's 787-9 order puts long haul aircraft back on order at Asia's largest airline. A later aircraft order will provide China Southern with post-2020 growth capacity.

China Southern intends to take delivery of 20 787-9s. This delivery is made up of 12 on order from Boeing and as confirmed by China Southern, and then a further eight from lessors: three from AerCap and five from Air Lease. The 12 units direct from Boeing have delivery dates in these lots: five in 2018, four in 2019 and three in 2020.

The leased aircraft do not have publicly confirmed delivery dates, but seven are projected to be delivered in 2018 and then one in 2020. That would bring total deliveries to 12 in 2018, four in 2019 and four in 2020. China Southern's order consists of medium-term lift direct from Boeing while lessors provide more immediate capacity additions. 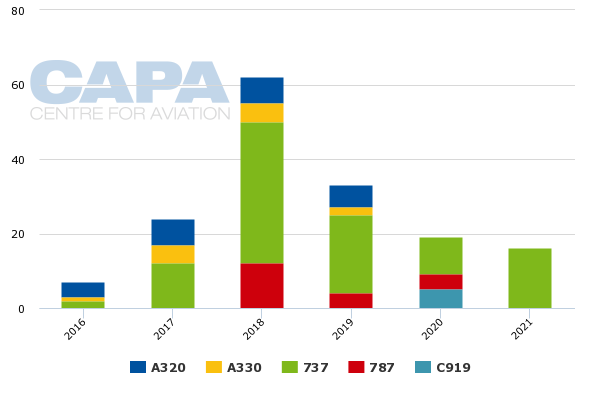 The 20 -9 variants join China Southern's existing 10x -8 variants. Xiamen Airlines, majority-owned by China Southern, has 6x 787-8s (its first widebody aircraft) and is expected to take 6x 787-9s. China Southern and Xiamen can pool resources to support the 787. The 787-9 is in service in mainland China with Air China and Hainan Airlines. China Eastern has ordered the aircraft and Lucky Air, part of HNA, has stated that it intends to receive the 787-9.

Air China and China Eastern have both had to split long haul aircraft needs – they will each take A350-900s and 787-9s. China Southern, however, has so far been able to rely on the 777 and 787. A330s (of which China Southern has 37) are in use at all three state-owned airlines, while China Southern's A380 (the only one operated by a Chinese airline) is a flagship but significantly underutilised.

The growth of long haul and ultra-long haul flights has been carried out almost exclusively by Boeing aircraft (mainly 777s and 787s). Chinese airlines' accelerated long haul growth this decade has helped Boeing's share of the intercontinental market reach 42% in 2016. In the long haul/ultra-long haul segment Boeing accounts for 63% of flights. For flights under 9,000km Boeing accounts for only 25%, mainly due to the domination of the A330 in this category. 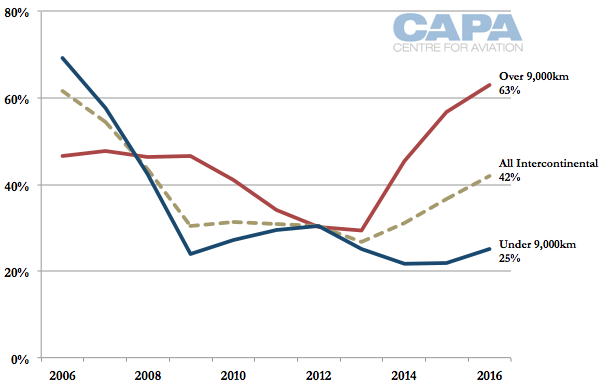 Flights under 9,000km still comprise the majority of Chinese airlines' intercontinental markets, although the above-9,000km segment has grown from 28% in 2009 to 45% in 2016, with most of the gains made in recent years. 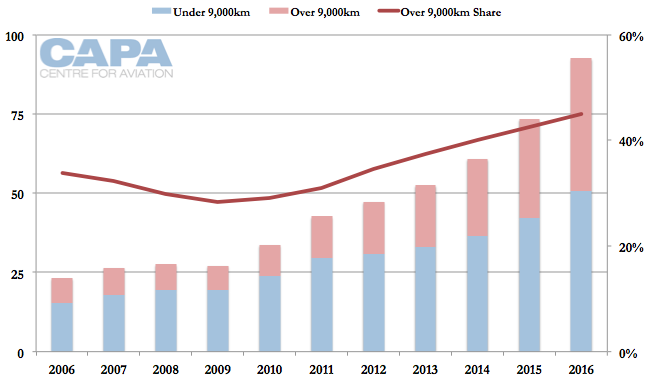 Despite Guangzhou opening its third runway in early 2015, movement growth did not occur until 2016. Guangzhou movements actually contracted 0.6% in 2015 compared with 2014 – nearly unheard of in Chinese aviation. 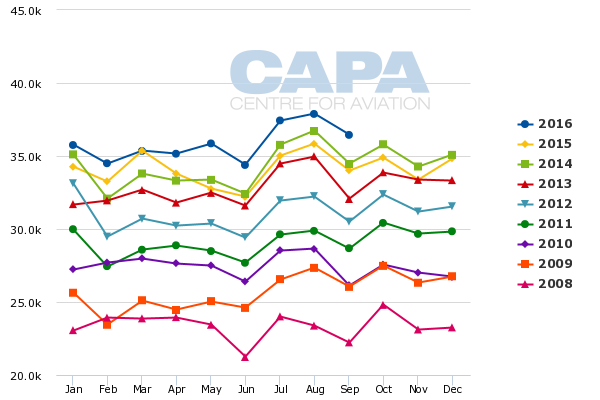 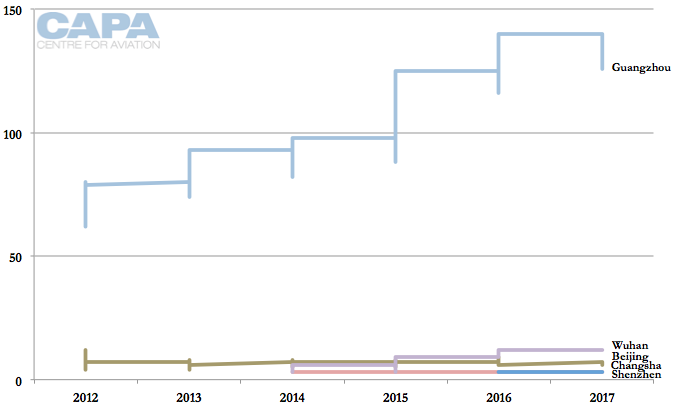 The preference towards 2018 deliveries also reflects how China Southern fell behind on refleeting. In 2016 China Southern took delivery of its 10th 777-300ER, thereby depleting its long haul widebody orders. China Southern has kept a low profile since chairman Si Xianmin was investigated for corruption and removed from office. In a politically sensitive environment that was not the time to be bold and order more aircraft. China Southern's 787-9 order indicates normality is returning.

China Southern has 13 A330-300Es on order, some of which will be used domestically. Internationally they can serve Australia or shorter European routes, such as Beijing-Amsterdam, but European services from Guangzhou would be pushing range. (Thus they are considered internally more medium haul, not long haul, aircraft.)

Theoretically incoming A330s could replace the few 787/777 services to Oceania, but in some instances China Southern needs heavier lift than A330s. China Southern's plans will mean maturing itself in Australia/NZ, and the airline wants to turn its growth focus to other long haul markets – namely North America.

Shenzhen is part of China Southern's catchment area, but Air China and Shenzhen Airlines are expanding

Despite being China's sixth largest airport, Shenzhen did not have any regularly scheduled long haul flights until Jan-2016, when China Southern started Shenzhen-Sydney. As is often the case in China – when there is change, it happens fast. Shenzhen has joined a dozen-plus airports in offering handsome incentives and subsidies for long haul flights. Air China, wanting to protect its territory, will have Shenzhen Airlines take A330s. Like other secondary airlines given widebodies by their airline or government owner, Shenzhen Airlines is wary: international and long haul is usually where Chinese airlines lose money.

In early 2016 Shenzhen airport was due to receive six intercontinental flights over the year, having had no flights previously. Three have been launched (Sydney, Frankfurt, Seattle), while a fourth (Auckland) is due to be launched. Of the last two proposed services – schedules have been issued for Melbourne but not put on sale, while a Los Angeles service appears unlikely in the near future.

Still, four or five intercontinental routes in a single year is a large change for Shenzhen, even if the services are subsidised.

Chinese airlines race to look for opportunities, grasping almost whatever routes (and incentives) are available in the hope that the services will be profitable in the future.

China Southern, Air China, Xiamen Airlines and Hainan Airlines are all due to operate long haul from Shenzhen.

The frantic pace has produced fragmentation. Hainan Airlines, for example, is due to fly to Auckland, which its sister airline Hong Kong Airlines launches in Nov-2016. Hong Kong Airlines relies on Shenzhen as part of its catchment area. Although the two may overlap, it may be better for the group to own the market rather than split it with another group. Still, with no direct coordination between the two, they promise to be competitors.

Still, as the home airline, Shenzhen Airlines has the upper hand. China Southern will need to invest in hub-building, from feeder flights to ground infrastructure, and it may be wise to concentrate on its nearby main hub of Guangzhou. 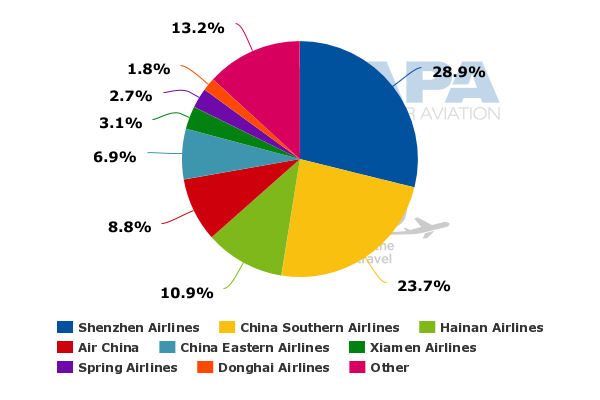 China Southern has made the largest pivot to international flying China Southern has indicated its major hub-building in Guangzhou is settling, but projections of its future international-domestic split are unclear. The biggest factor is what opportunities China Southern will have to fly from Beijing's second airport.

China Southern, along with China Eastern, will be base airlines. They assume, with having absolute final permission, that from Beijing Daxing they will be able to fly long haul, even to destinations Air China serves from Beijing Capital. This may finally mean that China Southern's underutilised A380 fleet will be put to use. It will also require a further aircraft order.

In a time of where there is a drought of widebody aircraft acquisitions, China Southern's plan to take 20 787-9s may stand out. Yet the aircraft bring China Southern only to the start of the next decade.

China Eastern's A350/787 order earlier in 2016 takes it through the early part of the next decade. As is increasingly the case in China, there is always more to come.