The competitive and fragmented aviation market of Shanghai will become more complex with China Southern Airlines' Jun-2014 establishment of a branch while HNA seeks to have locally-based Yangtze River Express transition from freight services to freight and passenger services. China Southern's enlarged Shanghai presence will follow its notable presence in Beijing and hub in Guangzhou. The long term could see China Southern attempt to launch long-haul routes from Shanghai, which have been lacking, although China Eastern Airlines is seeking to change this. Yangtze River Express holds some prime slots that could be used for passenger service, finally giving the HNA Group a presence in Shanghai.

China Eastern's market share in Shanghai has declined faster than Air China's in Beijing or China Southern's in Guangzhou, and this is likely to continue. Shanghai's Hongqiao and Pudong airports collectively handled 82.8 million passengers in 2013, just shy of Beijing Capital's 83.7 million. Over the next year, a slot expansion at Shanghai Pudong will increase the number of slots for existing and new entrants.

The merger gave China Eastern an approximately 16ppt increase in market share in its home market of Shanghai between 2009 and 2010. This brought it just above the level of China Southern in Guangzhou, and gave it an advantage over Air China, where between 2006 and 2008 its home domestic market share at Beijing Capital surpassed China Eastern's in Shanghai. 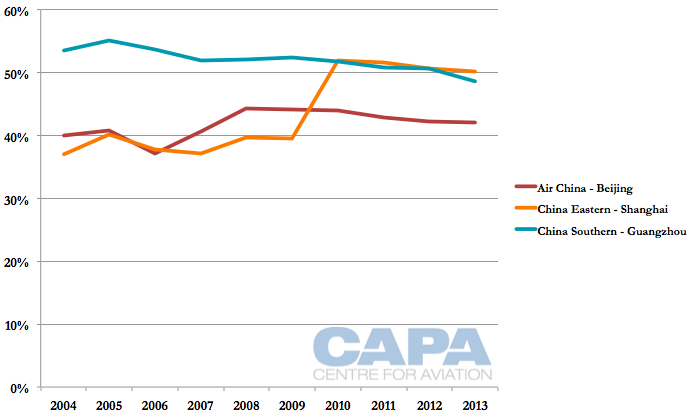 Chinese carriers have pursued the hub strategy of American counterparts. To be successful in a market, the major airlines consider it necessary to defend market share - almost at any cost. This held true in the US for a lengthy period, but carriers have broadly relaxed on this (a possible exception is the Alaska-Delta spat in Seattle) although the logic holds fast in China. But under the force of financial pressures this is changing.

The Big 3 – Air China, China Eastern and China Southern – are each losing home domestic market shares. China Eastern in Shanghai (Hongqiao and Pudong airports combined) has seen the largest fall, with a 3ppt drop in frequency between 2010 and 2013, according to OAG data.

Air China at Beijing Capital has had a 2ppt decrease and China Southern in Guangzhou less than 1ppt. However, China Eastern starts from a high base – indeed, its home market share in 2010 was the highest of the Big 3.

Domestic seat capacity shows a similar trend but with the notable difference of China Southern seeing a slightly steeper decline.

The concern over likely further fragmentation is obviously from competition but there are other causes: China Southern introduces the tricky matter of competing with an alliance partner. Further, China Southern is likely to attempt long-haul and A380 operations from Shanghai (it is the only Chinese airline with the A380). While long-haul is mostly unprofitable for China's airlines, in the long term it can be profitable and in the short term is a huge source of pride.

These developments come as China Eastern is seeking to strengthen itself after passing through a difficult period from which it has not entirely recovered. A more distant thought for those carriers growing in Shanghai is if China Eastern were again involved in consolidation activity, it could potentially gain market share if it acts quickly. In the short term, China Eastern will potentially be able to grow its position with the upcoming slot expansion at Shanghai Pudong airport.

HNA to gain foothold in Shanghai with Yangtze River Express

The expansive and privately-owned HNA Group is likely to gain a stronger foothold in the Shanghai passenger market via Yangtze River Express. HNA's existing presence in Shanghai is largely limited to Hainan Airlines flights to/from Beijing and a more limited schedule to smaller points like Taiyuan and Urumqi.

Locally based Yangtze River Express will have an easier time to secure new destinations, many of them first tier destinations, due to its inherent Shanghai connection. Allocation of traffic rights remains a highly localised and opaque process. 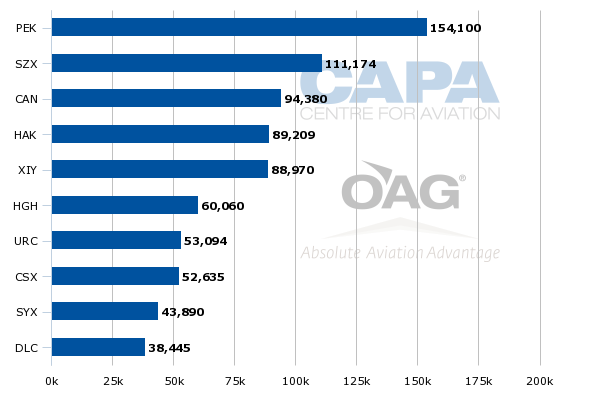 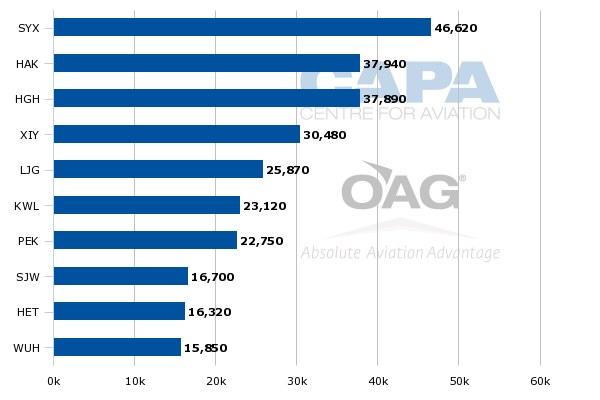 Yangtze River Express is an existing subsidiary of HNA, having been founded in 2002 as a freight carrier, which it remains today with a fleet of 21 freighter aircraft, including 18 737Fs and three 747Fs, according to the CAPA Fleet Database.

It was reported in Apr-2014 that Yangtze River Express applied to expand its business to include passenger as well as freight. It will likely follow a full-service model. If approved, this would be the second such conversion from a sole freight operation to passenger as well. In Dec-2013 Shenzhen-based cargo carrier Donghai Airlines applied to operate passenger services, commencing flights in Mar-2014.

Freight services could be re-timed to use late night/early morning slots that are unpopular for passenger flights. Alternatively, freight services could be reduced. So, re-allocating resources (slots, business licence) to a more prosperous business is logical. Yangtze River had operated an A330F but in Feb-2014, according to CAPA's Fleet Database, transferred it to Hong Kong Airlines, although this could be for other reasons (such as better pool of traffic rights).

Established by HNA as China Cargo Airlines, China Airlines became an investor then sold its 25% stake back to HNA in 2010. In Jul-2013 the complex HNA reported its stake as 51%, but intended to wholly own the renamed Yangtze River Express. In Mar-2014 Hainan Airlines (part of HNA as well) said it had leased a 737-800 to Yangtze River Express.

China Southern Airlines to grow in Shanghai, possibly use it as long-haul base

Guangzhou-based China Southern has had a presence in Shanghai, dating back to a sales department in 1997, base company in 2007 and from Jun-2014 a branch. These terms reflect the level of local commitment (with impacts on taxation, for example) which in turn can make for an easier process to secure traffic rights.

A Shanghai branch and enlarged position will give China Southern a  bigger network across the country, turning it even more into a pan-China carrier rather than one limited to where its bases (branches) are. China Southern is the largest domestic carrier. 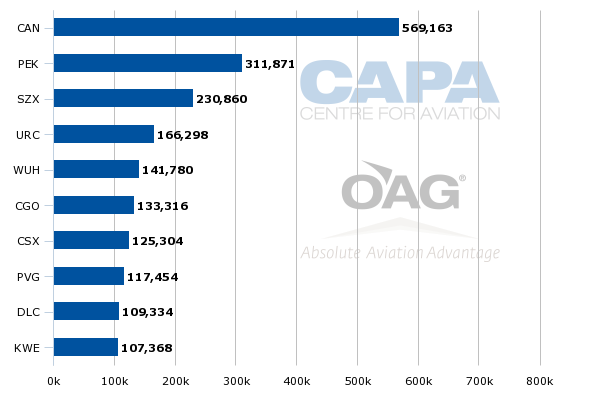 China Southern stated it operates 38 aircraft at Shanghai, with three 737-800s to join in 2014. China Southern already uses Shanghai as a cargo base with cargo services in Jul-2014 to/from Amsterdam, Anchorage (continuing to Chicago), Frankfurt, Los Angeles, Osaka Kansai, Vancouver and Vienna. China Southern has put particular focus on cargo developments, with plans to base another 777F at Shanghai and develop cargo facilities and a larger cargo infrastructure network across the region.

The domestic market is where Chinese carriers earn the bulk of their profits, and this is not expected to change in the medium term. But nonetheless long-haul services are important for their branding and to fulfil government wishes for Chinese carriers to have a robust presence in international markets rather than let foreign carriers take and/or divert traffic. For China Southern, a new long-haul base is especially important. From Beijing most major international cities have service from Air China, ruling out the opportunity for a second carrier. China Southern has a firm grasp on Guangzhou, but it lacks the high-yielding traffic of Beijing or Shanghai.

In Shanghai meanwhile China Eastern has grown its long-haul only modestly, potentially creating an opportunity for China Southern to exploit. Shanghai is a far better base than Guangzhou for its A380s, which operate to Los Angeles (generally unprofitably) and then seasonal services to Sydney (also unprofitably) and domestic services that put high cycle counts on airframes and where premium cabins are seldom full.

See related report: China Southern's A380 problems may not be solved by possible Air China partnership

Shanghai is unlikely to protect China Eastern the way Beijing did for Air China when China Southern wanted to operate its A380 from Beijing. The looser relationship with China Eastern is evidenced by Yangtze River's application (which is expected, as it could not proceed to application without substantial support) and China Southern's successful expansion.

Shanghai may be intentionally throwing a challenge to China Eastern in order to force it to strengthen itself. But China Eastern, should it deliver results with its 777 and a forthcoming re-branding, is unlikely to be left out to dry. And a China Southern long-haul passenger base may be a step too far for the airline to take in this dynamic and changing time.

China Southern, and to a smaller extent HNA, are likely to benefit the most while China Eastern loses ground.

This latter outcome is expected by China Eastern, and the carrier already expects to receive proportionally fewer additional Pudong slots, further decreasing its market share. The question is by exactly how much – and if China Eastern can make advances in other hubs the way other carriers have in Shanghai.

Then again, there is still low-hanging fruit for China Eastern to exploit in Shanghai. Greater realisation of local opportunities could lead to support for initiatives elsewhere.

As far as international services are concerned, the challenge is to balance the respective interests of Chinese airlines while ensuring some combination of them is able to be competitive in fast changing international markets.

These two objectives often conflict; a solution to international carrier competition (ie allowing another Chinese carrier to enter) may not bode well for their development prospects (ie allowing Chinese airlines to strengthen before competing with each other internationally).

The process of nursing large airlines to robust health by central regulatory means has a doubtful history. In a competitive environment there is an ever-present risk of supporting an airline to the stage where it cannot stand alone. Yet, understandably, China strongly supports the need for a powerful international aviation force.

This dilemma will continue to play out over the next couple of years; for now, the Shanghai scenario will be an interesting display of how Beijing (and Shanghai) are able to navigate this difficult process.