This is the second part of a report on China Southern's A380 deployment to Sydney, a move that will gain public interest from the angle of a previously obscure carrier bringing in the world's largest aircraft to one of the world's most iconic cities. While the capacity increase is large at 41%, the 1,554 additional weekly seats have been put in by or been exceeded by other carriers serving Sydney in recent times.

What makes China Southern's A380 deployment to Sydney notable – and worrisome – is not the sheer number of seats but the low yields they will be priced at. China Southern is offering return economy tickets from Australia to Europe during the European summer – before the A380's entry and capacity increase – for as low as AUD1,102 (USD1,143), half the price of typical fares only two years ago. Business class fares have seen similar percentage cuts over the last two years, with return business class to Europe for AUD5,819 (USD6,034).

China Southern's A380 will increase its daily business class seats to Sydney from 48 to 100 and the number of first class seats in the market from four to eight. This will challenge already decreasing premium fares, the heart of carriers' profitability.

China Southern is disadvantaged as it is based in Guangzhou, which has more limited point-to-point traffic than Shanghai (base of China Eastern) or Beijing (base of Air China). This limits high-yielding opportunities.

Further, China as a whole for premium traffic is still a developing market with premium fares commanding a lower yield advantage than in other markets. China Southern, like its peers, still has some way to go on international marketing. These factors combine to all but ensure the additional capacity will be taken up only by low-yielding fares.

China Southern had 370,000 international connecting passengers in 2012, a significant increase from 30,000 in 2009. Some routes see transfer rates upwards of 70%. Australian, European, Japanese and Korean routes see about 50% of passengers transfer to China Southern's domestic network.

Return fares with taxes for travel around the Australian school holidays and European summer can be as low as AUD1,102 (USD1,143) from Sydney to Amsterdam and AUD1,621 (USD1,681) from Sydney to Paris in economy. These are earth-shattering prices, with Sydney-Europe fares  fetching prior to 2012 at least AUD2,000 (USD2,074).

China Southern in early 2012 began aggressively pricing Australia-Europe fares. Adding capacity to Sydney with the A380 takes this one step further as more cheap seats will become available between Australia and Europe. As CAPA reported in Jul-2012:

China Southern in early 2012 dropped economy class fares between Europe and Australia to below AUD1000, near-unprecedented levels. Other carriers, including Air China, Air France and Qantas also dropped their prices but not as low as the AUD1000 level. It was an early sign of the enormous impact Chinese carriers (able to support services with high third and fourth freedom flows) could have on sixth freedom networks between Asia and Europe.

While China Southern has previously released discounted business class fares, its push following a Jul-2012 announcement to make its Guangzhou-London Heathrow service daily from Oct-2012 (it commenced only in Jun-2012) has been marked. The carrier today offers Sydney-London business fares in Nov-2012 as low as AUD5100 inclusive of taxes while Asiana offers fares as low as AUD5400.

China Southern has become more aggressive in the premium cabins since introducing the A380. A recent low was Seoul Incheon-Los Angeles flights via Guangzhou in business class on the A380 for USD2,100 return with taxes – mere double a standard economy fare.

Competitors have felt pressure and selectively responded with fare matches or deeply discounted seats. But expansion of China Southern – with the A380 or any inevitable future changes (it plans to increase weekly Australia and New Zealand flights from 38 in Apr-2013 (43 by Oct-2013) to 55 by 2015) – will also impact the ability of the market to absorb recent capacity additions.

There is a raft of additional international capacity coming out of Australia. Emirates and Singapore Airlines, the largest foreign carriers in Australia, have added services. Emirates overlaps with China Southern for European services, but less so in the Australia-Asia market. 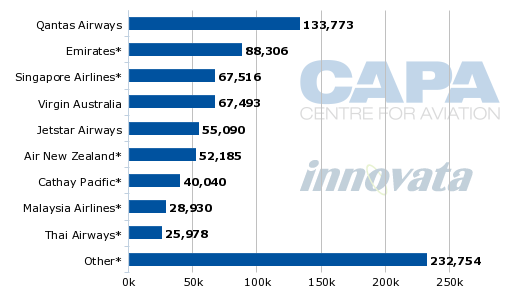 The fourth-largest foreign carrier, Cathay Pacific, has fully utilised the Australia-Hong Kong bilateral and has said it will add flights when permitted. The fifth largest foreign carrier, Malaysia Airlines, had planned to deploy its A380s to Australia but could not owing to capacity restrictions. AirAsia X has large growth ambitions and is also impacted. 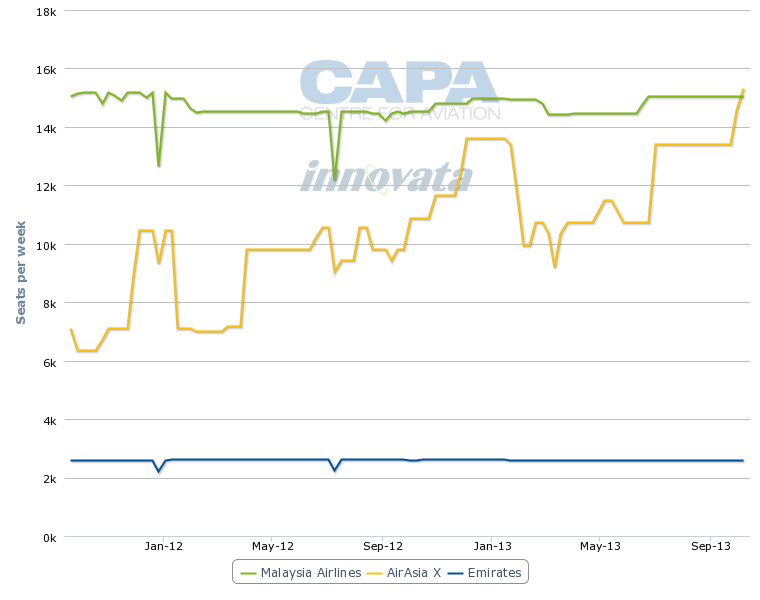 Also in the UAE, Etihad has increased Abu Dhabi-Singapore-Brisbane services to daily and will up-gauge Abu Dhabi-Melbourne services from A340-500s to 777-300ERs. 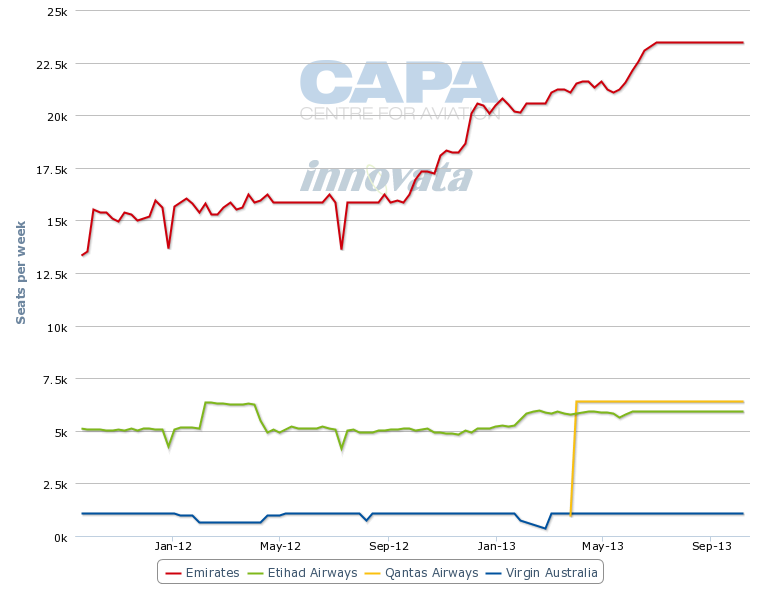 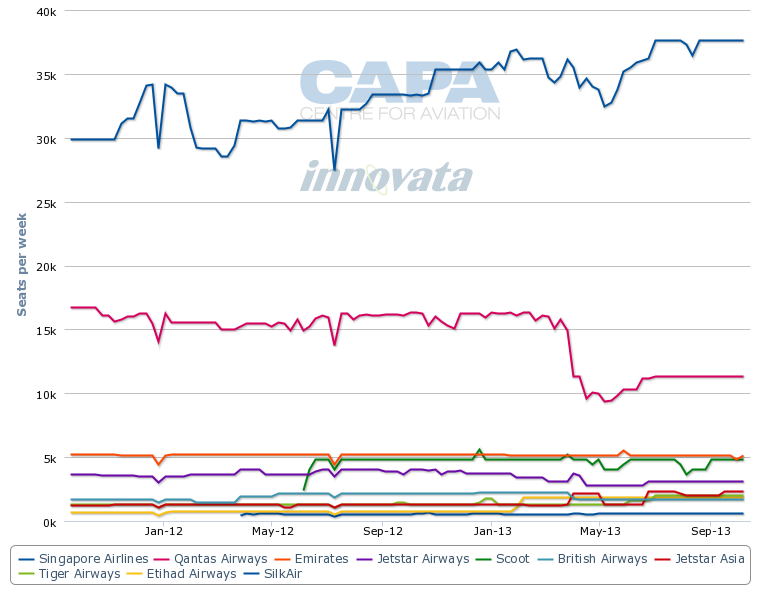 While Qantas has decreased capacity to Singapore following its shift of London services stopping over in Dubai instead of Singapore, there is actually an increase in the number of Qantas seats terminating in Singapore. Previously the higher capacity going into Singapore was mainly connecting to Europe whereas now Singapore-bound passengers are going to Singapore or other Asian destinations under some partnerships Qantas has and wishes to increase. Singapore-Australia has also seen the addition of about 5,000 weekly seats from Scoot at very favourable prices.

Air New Zealand is increasing its China focus, up-gauging Shanghai-Auckland flights from 767-300s to 777-200s. The carrier is even targeting sixth freedom traffic from China to Australia, albeit at fares not as favourable owing to route circuitry.

The Southwest Pacific-Far East market (broadly Australia-Asia) ended 2012 with a 3.9% increase in premium traffic, according to IATA. Despite a raft of new capacity from mid/late 2012 from Singapore Airlines, 2013 is off to a slow start with Jan-2013 seeing a 3.2% decrease and Feb-2013 with a 2.8% increase (this is partially impacted by the later dates of Chinese New Year in 2013 versus 2012).

Jan-2013 was the worst of IATA's measured premium markets while Feb-2013 was slightly above average. Challenging the economic situation – Australia has a two-speed economy with mining propping up what is effectively a recession elsewhere in the country – is further capacity from the Middle East, which across the board is positing large premium traffic increases. 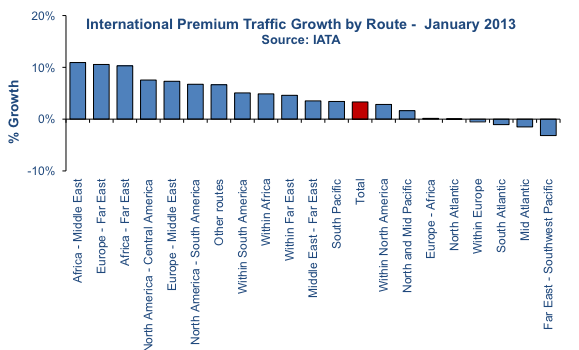 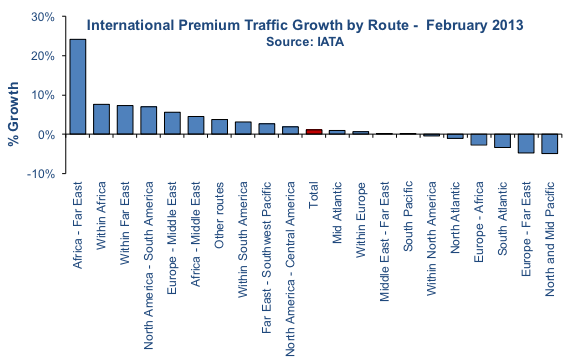 Load factors out of Australia are down since 2010 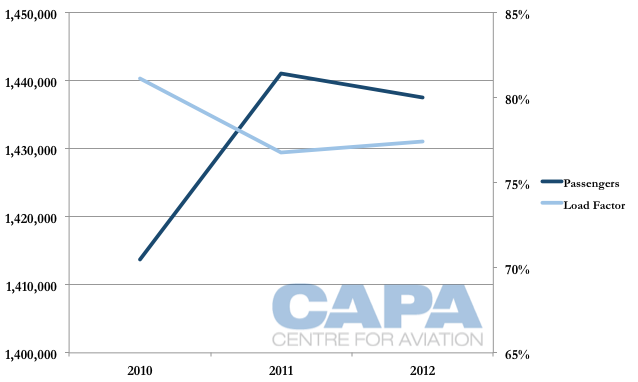 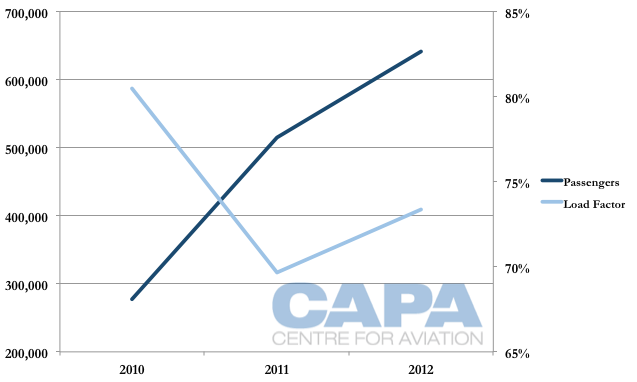 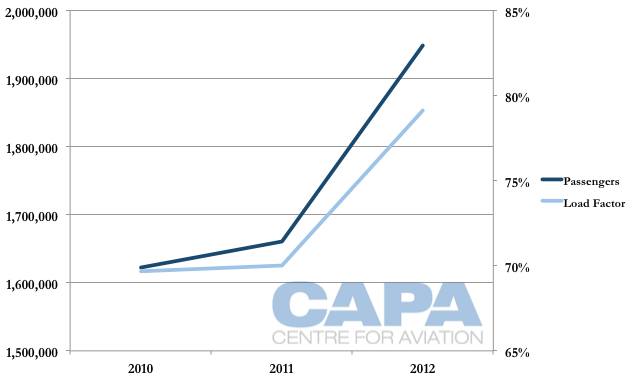 Note: Only includes passengers travelling from Australia to the UAE
Source: CAPA – Centre for Aviation and BITRE 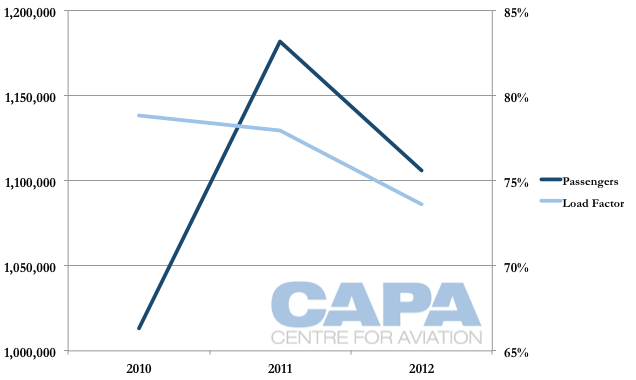 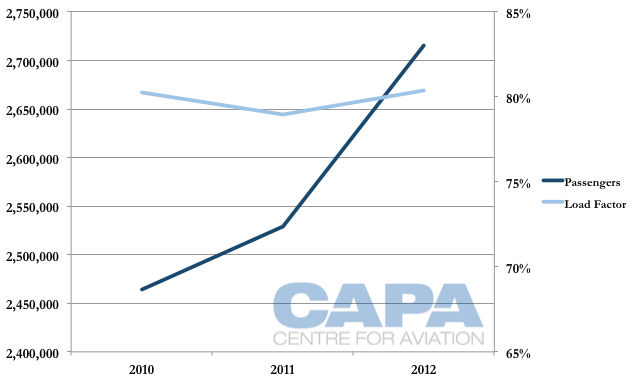 Further pressure will arise from Qantas' shift of European stopover from Singapore to Dubai. While Qantas' Singapore capacity is decreasing, the number of seats available for sale from Australia to Singapore (as opposed to continuing to Europe) will increase, and Qantas is targeting increased partnerships out of Singapore.

Beyond that, bilateral constraints start to become an issue. Singapore is open skies but Hong Kong and Malaysia are already at their limits while China and the UAE are approaching theirs.

The boom in capacity continues to benefit the Australian public and tourism sector especially with fares reaching new lows. If there is considerable further growth in bilaterals, however, foreign carriers will need to start weighing profitability over market share objectives as the going gets tougher, especially from further low-fare carriers, be they long-haul LCCs or China Southern.