China Eastern to transform China United Airlines into a LCC; first of China's Big 3 to have a LCC

Beijing-based China United is ideal for conversion to a LCC given its point-to-point focus, short routes, operation out of Beijing's second airport at Nanyuan, and small scale that limits potential for corporate travel. China Eastern is larger in Beijing but China United serves more secondary destinations that are potentially more suitable to LCC service.

There is already extensive cooperation between China Eastern and China United, with China Eastern codesharing on nearly every China United flight. There are opportunities for continued cooperation but the two will have to define what this dual-brand strategy entails and how much infrastructure – particularly IT – is in place to support it.

China in Nov-2013 introduced reforms to encourage new growth in its aviation sector, the world's second largest. The reforms encourage new carriers, including private ones and low-cost carriers. Besides having private LCCs, China encouraged state-owned carriers to consider dual-brand strategies and have LCCs. The exact balance between encouragement and subtle request is unclear, but with LCCs being the buzzword with regulators, China Eastern was surely not going to ignore the opportunity. Air China and China Southern are also likely to have LCCs in the future. Private full-service Shanghai-based carrier Juneyao Airlines has proposed a LCC, Jiu Yuan Airlines, to be based in Guangzhou. Spring Airlines has predicted China will see five to eight LCCs in the near future.

China United Airlines' origin is that it was run by China's army, the PLA. After China decided the PLA could not run a commercial airline, Shanghai Airlines eventually took over the modern China United. The merger between China Eastern and Shanghai Airlines saw China United fall under China Eastern. China United still enjoys some affection from the military, which permits it to operate from Beijing Nanyuan Airport, a military facility. China United is the only carrier to operate from Nanyuan, which is closer to most key parts of Beijing city than Capital Airport. Nanyuan Airport offers domestic-only facilities, and it is due to close to commercial flights once the second main Beijing airport opens later this decade.

For now, China Eastern enjoys China United's position in an otherwise heavily slot-constrained destination with critical – and high-yielding – traffic. China United has grown by at least 23% in each of the past four years. 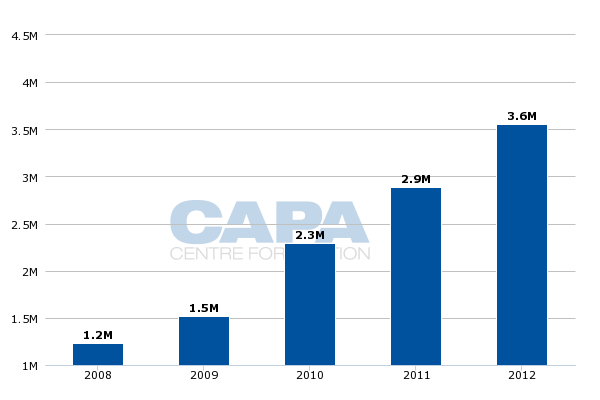 2013 should be one of China United's largest for growth, with the carrier in the first nine months of the year carrying at least 35% more passengers every month than in 2012. The carrier will likely end 2013 with around five million passengers. 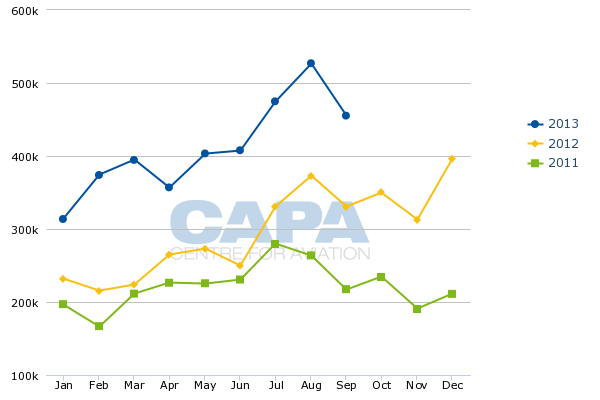 Finer details of China United's operation also support its conversion to a LCC. China United in Dec-2013 is China's 14th largest domestic carrier. Its network is spread out rather than concentrated, limiting its ability to retain business passengers compared to other carriers with more robust schedules. For example, China United's largest major route based on frequency is Beijing Nanyuan to Shenzhen, one of China's trunk city-pairs: Beijing Capital to Shenzhen is the country's third-largest domestic route based on seats. But China United only offers three daily flights, with its latest flight leaving Beijing at 12:40 in the afternoon. Similarly, China United has two daily flights to Chengdu, but the first flight does not leave Beijing until four in the afternoon. 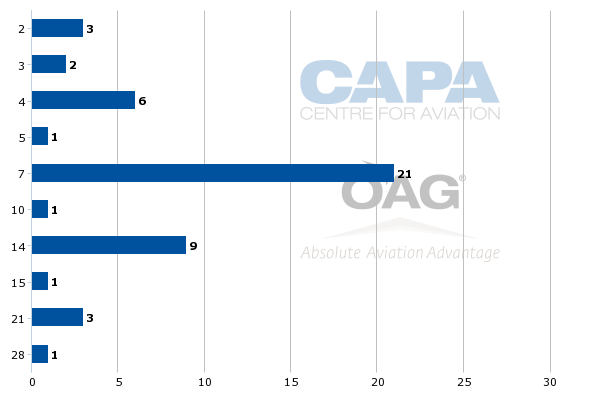 Such scheduling limits the potential for high yields to recoup a comparatively expensive cost base. Connections are also lacking owing to China United's position as well as there being no other carriers operating at Beijing Nanyuan that could feed China United.

China United's network is heavily bent towards short flights, where LCCs have demonstrated their sharpest success – a combination of the market being more willing to embrace LCCs for short flights in addition to short flights being able to achieve a lower cost base than longer flights compared to full-service carriers. (On longer flights, inflexible costs like fuel comprise a greater share of total trip costs.) About 35% of China United's flights are around one hour while 70% are around two hours. This compares to China Eastern having 22% of its domestic flights being around an hour while it too has about 70% of its flights being around two hours. 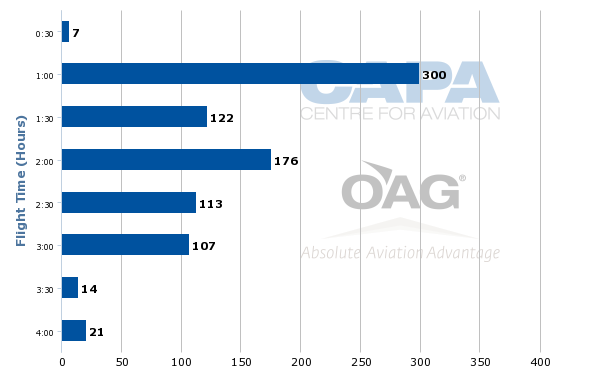 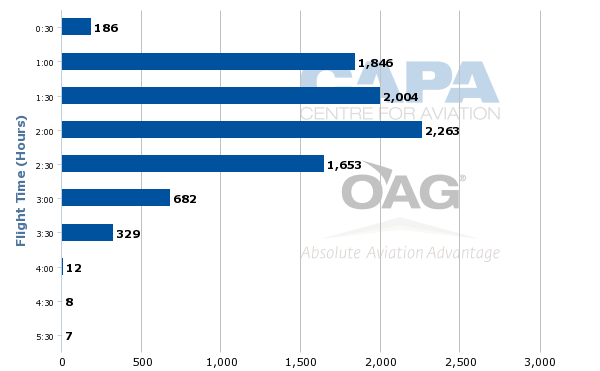 Meanwhile the small nature of Nanyuan airport gives it similar characteristics to an alternative airport. Indeed, Nanyuan may be one of the few airports in Asia that is a viable secondary airport. Nanyuan's small size also makes it an efficient airport to fly in and out of, as well as turn aircraft around at. Nanyuan, which received a new but basic terminal in 2013, does not have jetways.

China United's network is more populated with smaller cities that are still emerging economically. This makes them more suitable to LCC service since LCCs should have lower cost bases. This means not just growing price-sensitive traffic more than full-service carriers can, but profitably operating thinner routes. China's main carriers have struggled to make smaller destinations profitable.

But before this can be considered, China United has to define how exactly it will be different as a LCC. There are a number of network changes that could improve its cost base without impacting what passengers directly experience. Other changes could impact the passenger experience: currently luggage and meals are complimentary while aircraft are in two classes: there is a small, and often unoccupied, premium cabin. Simply making better use of the existing fleet will not change the partnership with China Eastern, but taking away luggage and meals may require China Eastern to re-consider how – or if – it sells China United flights. China's airlines are largely dependent on TravelSky for distribution, which has limitations for LCCs and product un-bundling.

The plan for China United's transformation is unknown. One of many questions will be how to gain greater fleet efficiency since China United operates 737-700/800s alongside a small number of young A319s.

Rapid fleet growth is planned – perhaps optimistically – as China United expects to nearly double its fleet to 50 aircraft by the end of 2015, by which point it expects to carry 10 million passengers per annum. To show the gap in efficiency China United must close, Spring Airlines passed the 10 million p/a passenger mark with less than 40 A320s.

China United will overlap with LCC Spring Airlines at Shijiazhuang 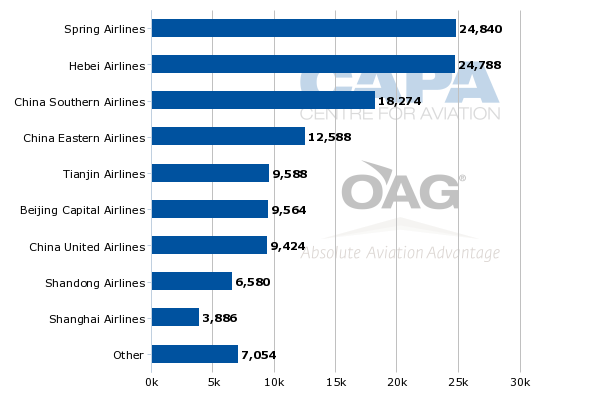 China United's transformation into a LCC may be small but it is not insignificant. China United is an effective medium for China Eastern to test the LCC model. Some details await, but overall the top-level strategy is rather clear and logical. As details unfold and the carrier re-launches, it will be interesting to see what, if anything, China United learns via China Eastern's involvement in Jetstar Hong Kong, which has not launched but already shown China Eastern a very different – and more efficient – kind of operation.

There are seldom big bang moments or developments in China; gradual progression with experimentation is the rule of thumb. This is encapsulated in Deng Xiaoping's proverb that is increasingly making the rounds following announcements of limited de-regulation. Deng spoke of "crossing the river while feeling the rocks".

There is limited room for innovation in aviation, so it is likely China Eastern will not be alone amongst the country's major carriers in taking smaller subsidiaries for a walk to the riverbed.