A year after the pandemic started there are clear signs of strong domestic traffic growth at the point of origin, in China, along with an announcement that a new airport serving one of the major cities in western China, Chengdu, will open on schedule in Jun-2021.

While the signs are positive, it must be realised though that growth is only in the domestic segment, since international travel is still suppressed and the new airport is meant to handle international services.

In some ways, the acid test will come when a big international sporting event is held in the city later in the year, and it will be measured by the capability of the airport and event organisers to handle the visitors safely, and by whether or not they show up at all.

Chengdu Tianfu International Airport to be commissioned in Jun-2021

The pandemic may have started in China just over a year ago, but while it may not yet quite have ended, yet there is the fact that an opening date has been set for a new airport at Chengdu.

Chengdu is China’s seventh largest city, with a population of more than nine million, and the project is at least one indicator that an economic recovery is possible, and in the air transport sector. Moreover, air traffic statistics from China for the first two months of 2021 also add weight to the recovery trajectory, even if it is probably the only country so far to record positive gains compared to 2020. Domestic traffic is rising sharply throughout China.

Chengdu Tianfu International Airport (CTIA) has announced that it is scheduled to be commissioned on 23-Jun-2021. Accordingly, Chengdu will become the third city in China to be equipped with two international airports, after Beijing and Shanghai (although the latter’s Hongqiao airport’s international capacity is currently a miserly 0.1% of the total, and Beijing Daxing – absolute zero).

The airport is located approximately 50km southeast of the city of Chengdu, at the junction of Jianyang City and Jintang County.

CTIA is an airport development project designed to provide the city of Chengdu and its surrounding areas with a second major airport. It will serve mostly international services, so one can reasonably expect there to be a lengthy soft opening as international services are only slowly returning to China.

Chengdu is a ‘sub-provincial’ city that serves as the capital of the Chinese province of Sichuan.

It is one of the three most populous cities in Western China, the other two being Chongqing and Xi'an. While the urban population is more than nine million, the administrative area houses more than 14 million inhabitants. Chengdu is considered a World City with a "Beta +" classification (pairing it with Barcelona and Washington, D.C.), according to the Globalisation and World Cities Research Network. In 2020, Chengdu ranked 43rd in the Global Financial Centres Index.

Chengdu, considered to be one of the most liveable cities in the country, is one of the most important economic, financial, commercial, cultural, transportation, and communication centres in Western China. Its economy is diverse, characterised by the machinery, automobile, medicine, food, and information technology industries. The city also hosts many international companies and foreign consulates. There are 270 Fortune 500 companies that have established branches in Chengdu.

Chengdu Shuangliu International Airport was the 24th busiest airport in the world in 2019, and the Chengdu railway station is one of the six largest in China.

The city will host the FISU Summer World University Games in Aug-2021 – an international multi-sport event and the first world-class sports event to take place in western China. It will be a test not only for the city’s organisational abilities, but also a test of China’s competence to host public attendance events on a large scale in the aftermath of the pandemic, and one that will involve substantial incoming international travel. Some international conferences have already been held.

Built at a cost of USD12 billion, the airport will handle up to 90 mppa

The total cost of the new airport project was forecast initially (2014) to be CNY71.8 billion (then USD12 billion).

The new airport will cover an area of 30sqkm and will feature three runways in phase one, and then a further three in phase two. Once completed, the airport will have capacity for 90 million passengers (more than twice that of Chengdu Shuangliu International Airport [CSIA]), six million tons of cargo, and 850,000 aircraft movements per annum, making it the largest airport in China’s western region and the nation’s fourth largest international hub.

The minutiae of its financing have not been made public, but as with all airports in China now, there is no foreign involvement. A series of loan announcements were made in 2015, including one from Agricultural Bank of China, which committed to a CNY12 billion (then USD1.9 billion) loan to be used for the construction of the airport.

CTIA’s phase one construction project was expected to complete basic construction in 2020, with plans to begin operation in 2021. Despite the pandemic, that timescale has been kept to, along with the budget. Indeed, the timeframe was shifted forwards from the original date to 2019, but then put back again to 2021.

Regulatory approval was granted in Jan-2015 and the initial projection was for three runways capable of handling 40 million passengers, 700,000 tonnes of cargo and 320,000 aircraft movements upon its completion in 2025. It was to be constructed according to a code 4F standard, with a 520,000sqm terminal building and a 157 aircraft parking bay apron. Further expansion would take it to six runways with the capacity to handle 90 million passengers per annum. The new airport’s terminal size will be 1.8 times that of terminal two at CSIA.

Construction work began on 27-May-2016, the airport’s feasibility study report having received National Development and Reform Commission approval on 18-Apr-2016. Highways, subways and intercity railways were also planned, in order to link the new airport to downtown Chengdu and other parts of the city.

Construction work was only temporarily halted by the pandemic, in Feb-2020 and Mar-2020. Building work on the main terminal had already been completed, in Dec-2019.

The airport will primarily handle international services, with the current Chengdu Airport to handle domestic services.

But in normal times there is a greater international capacity ratio. CSIA is an important hub in southwest China. The airport serves as a base for Air China and Chengdu Airlines, and many of the major Chinese airlines have a presence. CSIA is classified as a 4F facility, capable of handling widebody equipment. 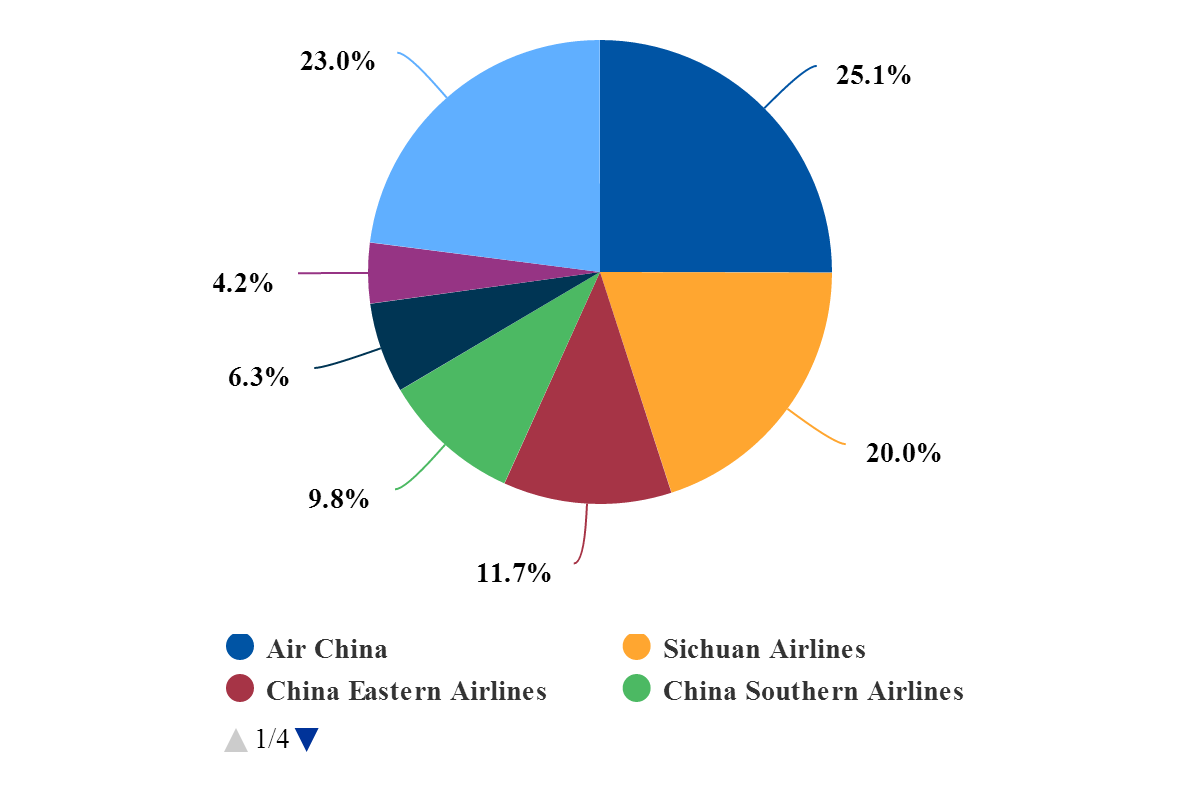 The rationale behind the development was the usual one – namely, that Chengdu Shuangliu International Airport was almost running at full capacity, but that passenger volume has kept rising in recent years. It was forecast that the volume in Chengdu would reach 62 million by 2020, hence the need for a larger airport in the city.

That forecast did not happen, and not only because of the pandemic.

As the chart below shows, since 2014 when the new airport was first announced annual passenger growth rates have twice exceeded 12% per annum. But that was in the first two years.

Since then the growth rate declined in each successive year through to 2019. Had it continued at the 12% rate, then it would have reached 62 million earlier than 2019.

However, the growth rate was still sufficiently high to merit a new airport, as opposed to a substantial extension of the existing one. 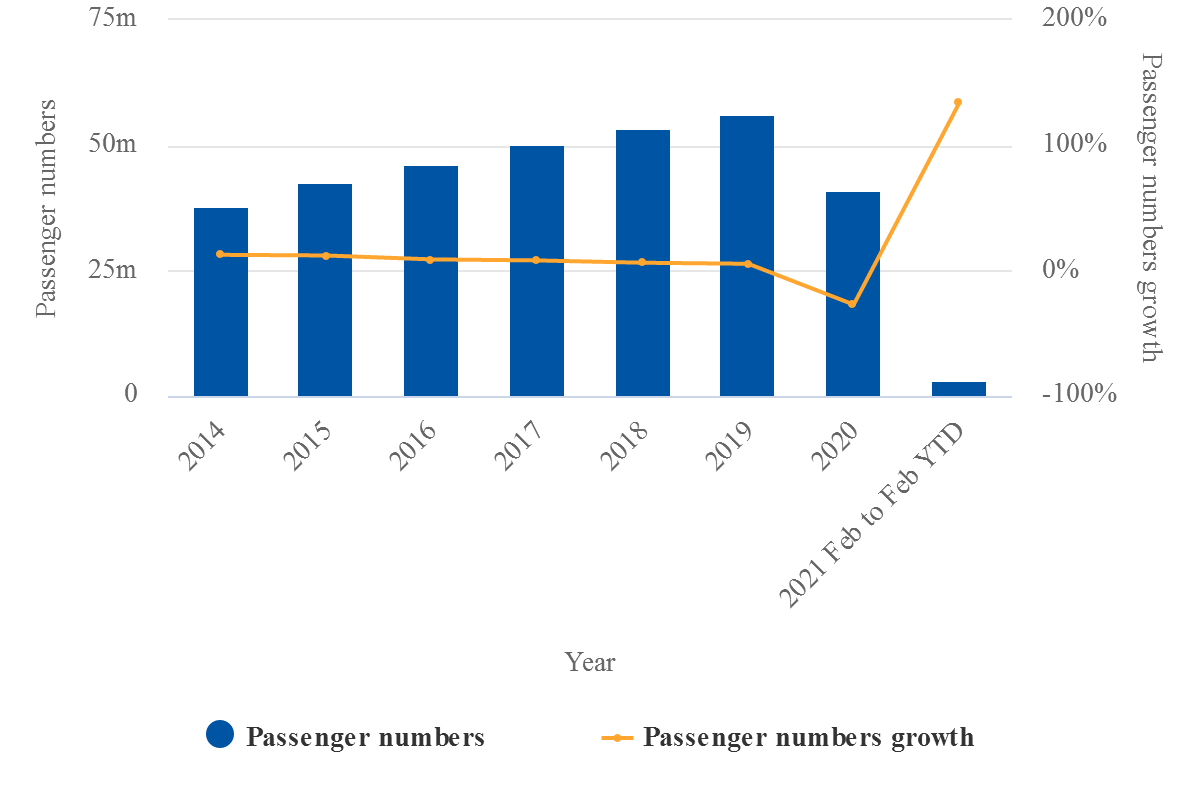 The chart also shows that passenger numbers reduced by only 27% in 2020.

In other countries in Asia and in Europe those digits could be reversed. And the other, even more startling, statistic is the 134% growth in passengers in Feb-2021 (no figures are available for Jan-2021).

Contrast that with this random selection of statistics below, announced on 16-Mar-2021 for airports in Europe for Feb-2021:

Swedavia (10 Swedish airports, including those in Stockholm): -90%

And – this is the first time a passenger statistics chart has been published by CAPA in a year that shows a positive growth figure for the previous month.

Which begs the question, is this also the case at other Chinese airports?

It is, as the table below demonstrates. The table is of Chinese airports that have announced Feb-2021 figures.

Passenger statistics for airports in the 10 largest cities in China, Feb-2021

The first caveat is that airports which have announced both Jan-2021 and Feb-2021 statistics do not show a marked improvement of the kind shown by those that have only reported Feb-2021.

From this it can safely be assumed that, in China at least, Feb-2021 has marked a turning point.

…but it is coming exclusively from the domestic segment

The second caveat is that growth is coming almost exclusively from the domestic segment.

To take the Guangzhou Baiyun airport as an example, as it was the world’s busiest airport in 2020, the 139% traffic growth in Feb-2019 arose from the domestic segment (+224.2%) whereas international passenger numbers were down by -82.8%.

The only international growth is in the freight segment, where in Guangzhou’s case it was +47.2% (domestic cargo +76.9%). But then Guangzhou has a very large industrial ‘aerotropolis’ surrounding it.

COVID-19 cases have plateaued in China; positive impact on domestic, but not on international

The success of the airport initially and over the next two years or so will be dependent on the lack of the COVID-19 coronavirus, or the degree of control exercised over it.

Looking at China as a whole, and assuming that the reporting of cases to the data compiler is accurate, the numbers of confirmed and active cases of COVID have both plateaued. 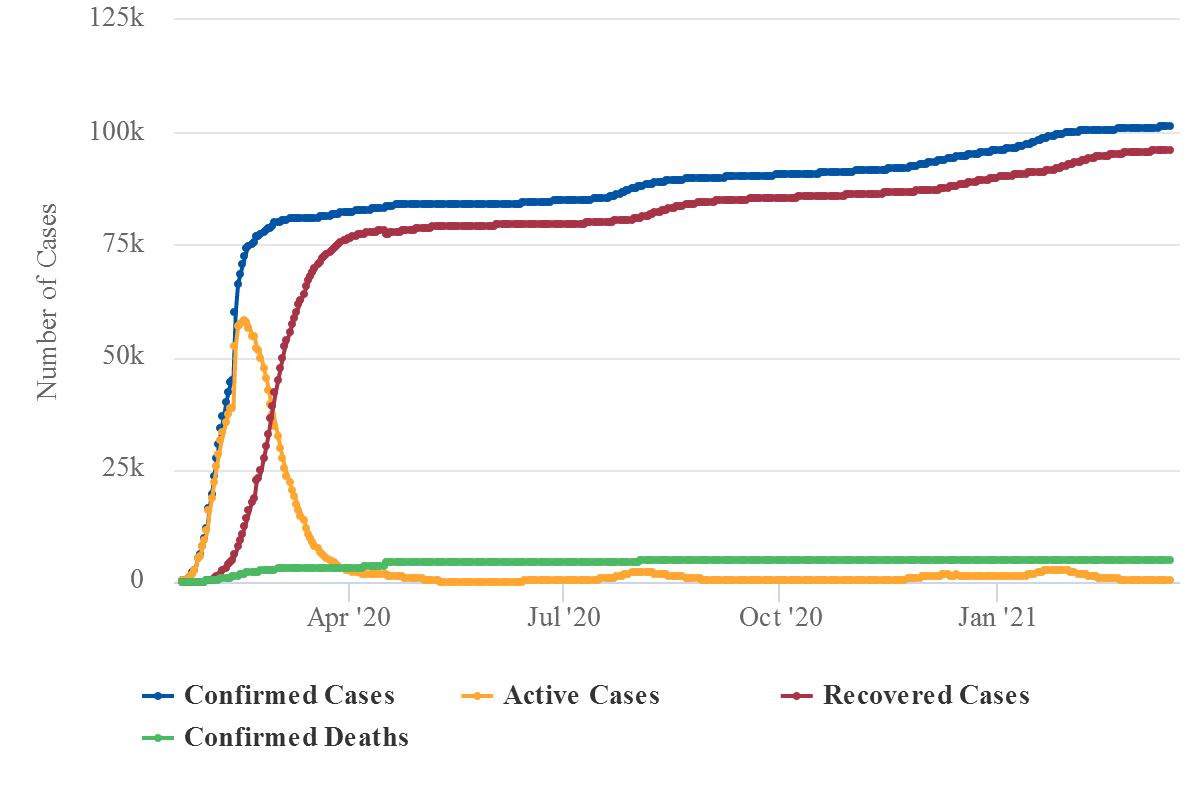 Turning to the relationship between the number of virus cases and capacity, shown below, the position is even more pronounced with confirmed cases in 2020 (red line) and 2021 (green line flat lining in comparison with 2020 capacity after Mar-2020 (blue line) and in 2021 (yellow line).

COVID-19: change in cases within China vs. system seat capacity

There is, though, another caveat here. If the chart for domestic capacity vs. virus cases is viewed it presents an even more optimistic outlook.

COVID-19 change in cases within China vs. domestic seat capacity

On the other hand, the chart for international capacity vs. virus cases presents a more depressing aspect in light of the fact that CTIA is designed mainly to handle international traffic.

COVID-19: change in cases within China vs. international seat capacity

More new airports to open in China, including at major cities; over 60 in total

Chengdu is not the only Chinese city that will have a new airport soon.

The CAPA New Airports Database lists 61 of them, active or proposed, out of 114 projects across Asia as a whole, and including Chongqing (two of them, one for cargo), Dalian, Kunming, Sanya, Qingdao, Xiamen and Guangzhou.