A slowdown in Chinese traffic at the end of 2012 resulting from decreased activity in line with the government’s leadership transition saw Beijing Capital Airport miss a widely-held projection that it would overtake Atlanta Hartsfield airport for the title of world’s largest passenger airport. Beijing remained in the #2 spot after breathtaking growth that saw it enter the world’s 10 largest airports only in 2006.

They are a fraction of the size of Beijing, Shanghai and Guangzhou, which account for 31% of passenger movements, but will increasingly garner international attention.

Beijing Capital Airport, the main airport serving China’s capital city, ended 2012 as the world’s second busiest airport by total passenger movements, just behind Atlanta. Atlanta has held the #1 spot for a few years but Beijing has been encroaching as it has been on an incredible growth story; in 2006 it was the world’s ninth largest (the first year it entered the top 10) and by 2009, third largest.

2012 was projected to be the year Beijing would assume the #1 spot from Atlanta, and during the first half of 2012 was posting higher year-on-year traffic figures that would propel it to the #1 spot. 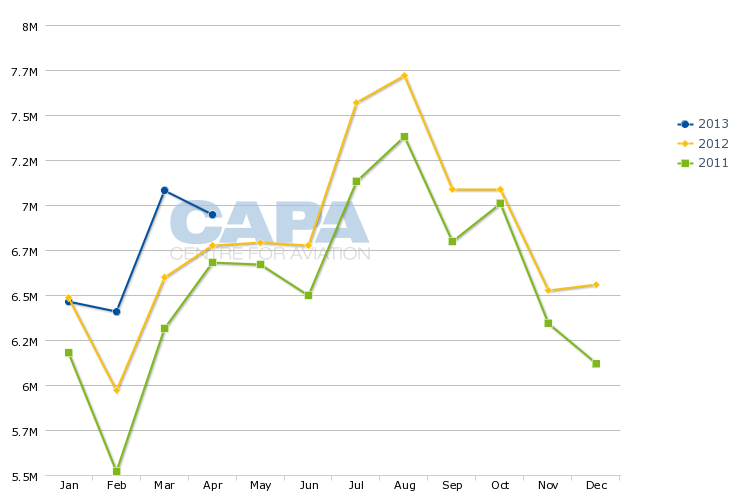 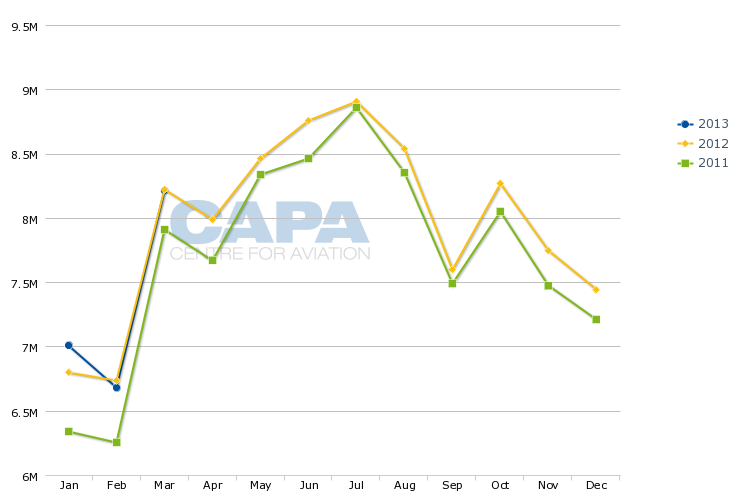 But China’s once-a-decade government leadership transition saw traffic growth drop off as business largely drew to a halt; government activities necessitating travel decreased in the lead-up to the conference. Government-related travel accounts for a sizeable portion of revenue, albeit one that carriers are not able to approximately calculate publicly. Other companies curtailed travel as they awaited insights into the new leadership’s economic policy. The effect of the leadership transition on the economy, and air transport, may seem perplexing but cannot be understated.

Targets across the board were missed; not just those at Beijing Capital. Spring Airlines had projected it would reach 10 million annual passengers in 2012 but missed this target due to the slowdown at the end of 2012.

There is still uncertainty about the new policy framework – some carriers expect insight will not come for another few more months – and this has led to further depressed levels of traffic growth. While China Eastern and China Southern are sustaining volumes, it is at the expense of yields. 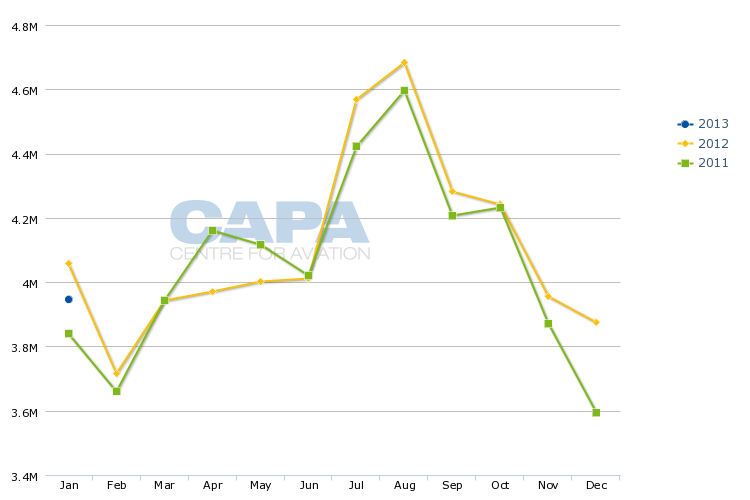 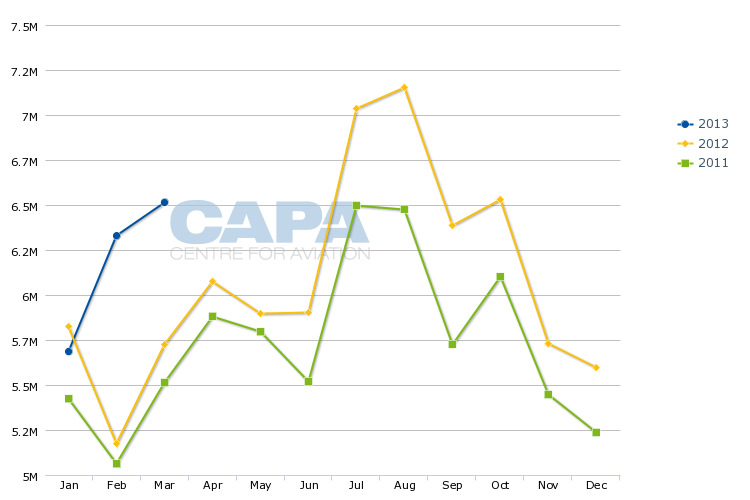 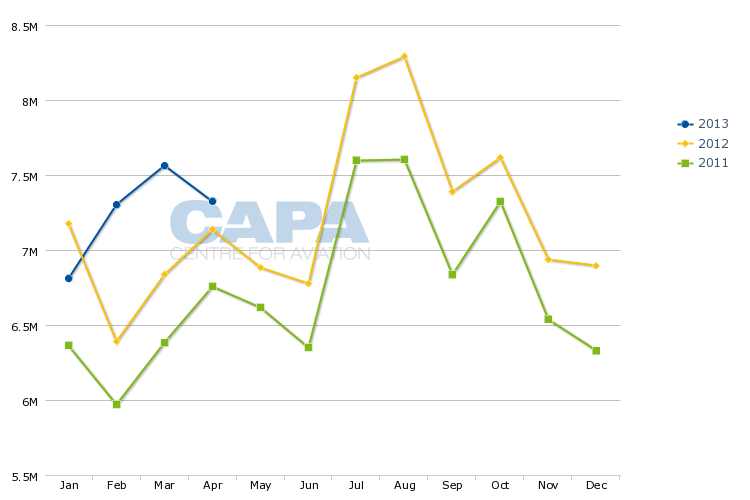 Beijing is largest airport in China by far

Shanghai’s airports could overtake Beijing by 2015, but then Beijing has its new airport

Beijing Capital will remain China’s largest single airport for the medium-term at least; the next largest is Guangzhou (home to Asia’s largest airline, China Southern) with 48.3 million passengers, slightly more than half of Beijing’s traffic. But in terms of cities, Shanghai will likely overtake Beijing around 2015 when it begins to reap a full year of additional traffic after it opens another runway sometime in 2014, thereby increasing slots, which are currently all but gone.

Shanghai’s honeymoon may be short as Beijing by the end of the decade plans to open a new airport, Daxing, to alleviate congestion at Beijing Capital, which will remain open even once the new airport is put into use.

Beijing, Guangzhou and Shanghai: slots constrained – what is the outlook?

But as slots have dried up, the rate of growth has slowed, although the figures in the current economic environment would make many airports pleased. Beijing and Shanghai Hongqiao had the lowest growth of the four airports at 4.1% and 2.2% respectively. Guangzhou recorded 7.3% growth largely due to China Southern, which has gained attention for rapid international growth but also for still growing its core domestic network. Shanghai Pudong managed impressive 8.3% growth, largely due to up-gauges whereas other airports are seeing growth through frequency.

Pudong should maintain admirable growth – globally and by Chinese standards – as carriers continue to up-gauge; Air France and Lufthansa have finally been approved by Chinese authorities to deploy their A380s. China Eastern in 2014 begins to take deliveries of 20 777-300ERs that will replace six smaller A340-600s and then allow for growth, almost all out of Shanghai Pudong.

The Chinese Government is favouring domestic carriers using larger aircraft, and reports indicate there are an additional 45 A330s on order for Chinese carriers. Some will be used internationally while others ply domestic trunk routes exclusively. Even Juneyao, a boutique-style privately-owned carrier, has shed its A319s and will add A321s to its otherwise all-A320 fleet. Spring, also privately-owned and based in Shanghai, is staying with A320s for the foreseeable future.

Guangzhou should also maintain strong growth, but this almost all due to China Southern. Expansion will not occur at the breathtaking speeds of recent years. The carrier quickly accelerated international expansion so about 30% of ASKs could be in the international market, and this has largely been reached. But with 787s coming online in addition to more A330s, as well as short-haul international flights needed to feed its network, China Southern will remain in the limelight.

The eye-popping growth figures are in western China

While Beijing, Shanghai Hongqiao, Shanghai Pudong and Guangzhou may have the high passenger figures, the large growth rates amongst China’s 20 largest airports are occurring primarily in the west. Leading this with 20.5% growth is Urumqi in China’s far northwest, along the border with West Asia. China Southern has positioned Urumqi as a hub for West Asia/CIS/Russia.

With enough domestic connecting opportunities at Urumqi, European flights from this hardly-known city could soon be a reality. 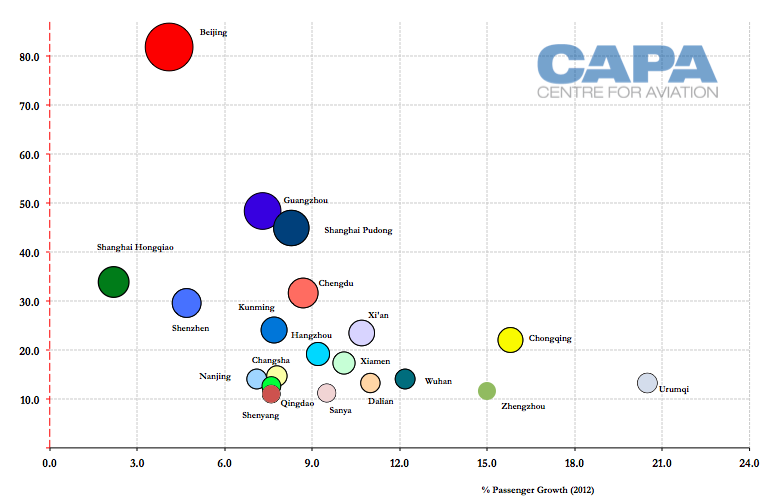 China Southern inherited its position at Urumqi through industry consolidation in past decades, but privately-owned HNA is making a dedicated plan from scratch to build up its presence at Urumqi, challenging China Southern.

The next fastest-growing major airport in China was Chongqing with 15.8% growth. Chongqing, along with nearby city Chengdu (8.7% growth), are the epicentres of China’s “Go West” campaign to increase economic activity further inland. Both saw new long-haul services in 2012 with more already lined up for 2013, including British Airways and Qatar Airways entering Chengdu.

Zhengzhou, making the top 20 list now, was the third-fastest growing major airport with 15.0% growth. This was largely piggybacking on the city’s rise as a manufacturing hub, especially for Apple iPhones and iPads.

The fourth fastest-growing major city was Wuhan with 12.2% growth. Most of the rest of the 20 largest airports in China saw annual growth between 7-11%.

Growth in China’s west is tied to increasing economic activity, but also government support – and subsidies – for services. Some of this plays into rivalries and wanting to gain attention in a country still largely anchored around the east coast cities of Beijing and Shanghai. Other services are subsidised as the economic growth resulting from bringing passengers in (often at a loss) offsets the subsidy. Those less bullish on China’s west project it may not be for a number of years – possible the end of the decade – that the region can sustain profitable services without subsidies.

There is also a pocket of growth in China’s northwest – cities like Dalian and Shenyang – as the region, much smaller than western China, undergoes an economic transformation from their previous rustbelt origins.  The airports are playing into domestic growth but also hubbing opportunities, both short-haul (Korea, even Siberia) and long-haul (Sichuan Airlines stops over in Shenyang en route from Chengdu to Vancouver, but this is due to operational reasons).

But these regions are not home to bountiful slots; Kunming opened a new airport in mid-2012 and already slots are largely used up. While growth is easier in the west and northeast, it is still complicated to orchestrate and investment plans are more muted.

China’s megacities the world is already familiar with will continue to experience growth (perhaps except at Beijing Capital and Shanghai Hongqiao) that may be looked at in China as “slow” but by all global measures is fast.

The even faster growth will continue to occur at second- and third-tier cities, most of which rival or exceed in size global counterparts. The Chinese market is heavily domestic, and will remain so, but these smaller cities will gradually gain more international recognition, and growth.