Taiwan's China Airlines is consolidating strategic developments from recent years into a strategy to target incremental Europe-Australia Kangaroo Route transfer traffic. This sixth freedom focus was not an explicit end goal as China Airlines moved its Bangkok-Europe services to nonstop, significantly upgraded its product, and took delivery of new 777-300ERs and A350s. The catalyst for the new focus appears to be China Airlines' intent to relaunch service to London and its needing feed to support the thin market.

China Airlines rightfully considers EVA's North America focus to be at overcapacity, but Europe-Australia has seldom been a yield saviour. North America may be a safer long term play.

China Airlines is adding a second daily Sydney flight to support connections to European cities other than London, but overall China Airlines has a small proposition of destinations, frequency. Market awareness is also lacking. China Airlines can certainly earn incremental traffic, but China Airlines will need to beware adding too many flights for what should be a filler strategy.

China Airlines is right to feel more confident about serving London: its image has been significantly updated as it has dropped a sleepy conservative design approach, replaced by a modern (if internally debated) take on classical Chinese culture. Uniforms, lounges and – most critically – the onboard product have been updated and are a significant improvement over the A340s China Airlines last flew to London.

The problem, however, is that London and the UK are not a major market for Taiwan. China Airlines' rival EVA Air serves London via Bangkok, and there is plenty of other one stop competition.

Absent strong local traffic, China Airlines has sought to work out how it can fill a London service. One answer was to link its Australia network with London. That, in turn, prompted a focus on the wider and very large Australia/New Zealand-Europe "Kangaroo Route" market.

China Airlines will be able to book Kangaroo Route passengers, but the question is how low-yielding they will be. Taipei-London will have low O&D of notable yield. While Australia is evidence of a number of airlines that have sustained themselves despite low O&D, their strong transfer traffic is made possible by extensive networks (destinations and frequency), product, marketing and loyalty programmes.

It would be easy for China Airlines to supplement theoretical large-volume, high-yielding Taipei-London traffic with filler Australian Kangaroo Route passengers; many airlines use Kangaroo Route passengers as traffic fillers. Even China Southern – which has made a marketing push with its "Canton Route" linking Australia and Europe – retains Australia-China as its core market, with sixth freedom connections being supplemental.

Without strong Taipei-London O&D and a limited sixth freedom proposition, China Airlines enters the Australia-Europe market with many disadvantages.

China Airlines will serve major cities, but with limited visibility

The Australia-Europe market is highly competitive and low yielding, and there will be far stronger transit propositions compared to those of China Airlines.

Once London is back online for China Airlines, it will be able to link three Australian cities (Brisbane, Melbourne and Sydney) with five European cities (Amsterdam, Frankfurt, London, Rome and Vienna) with a one stop service through Taipei. Further, Auckland is served as a daily tag from Brisbane. Melbourne and all European destinations except Frankfurt are served less than daily (Rome is even two weekly).

This combination of cities is not the highest, but gives China Airlines access to most of the largest markets and with a solid product (ex-Sydney).

In Dec-2017 China Airlines will have approximately 7,400 seats a week from Australia to its hub in Taipei, making it one of the bigger small airlines. Singapore Airlines, with SilkAir, will have 46,600 seats a week to Singapore, while Emirates will have 31,000 nonstop to Dubai (excludes one-stops through Southeast Asia). The Gulf operators in Australia/NZ have an almost exclusive focus linking Australia/NZ with Europe. 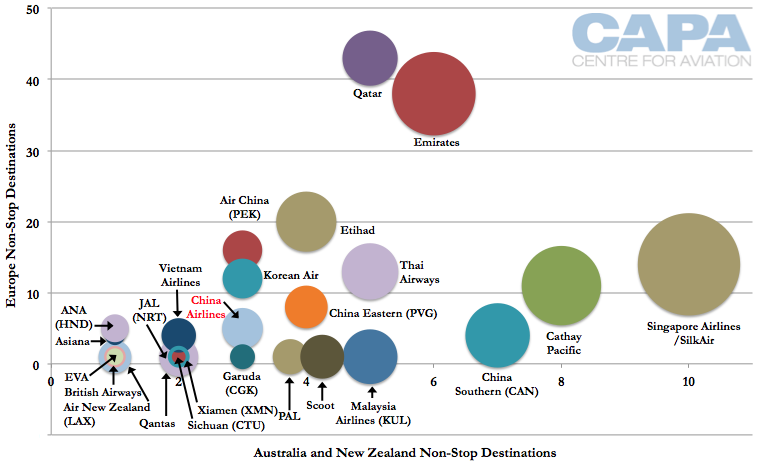 At the same time as launching Taipei-London, in Dec-2017 China Airlines is adding a second daily Taipei-Sydney flight and transitioning Sydney from A330 to A350 service. The A350 is a significant upgrade, and in business class has all direct aisle access lie-flat seats.

China Airlines' existing Sydney offering (arrive Taipei in early morning, leave at night) connects with the new London service (depart Taipei mid-morning, arrive back into Taipei late afternoon). From Sydney to London there is a 1h:25m layover in Taipei, while the return from London to Sydney has a less desirable 5h:00m layover.

Unlike its return from London into Taipei in the late afternoon, China Airlines returns into Taipei in the early morning from three of its four other European destinations: Amsterdam, Frankfurt and Vienna. Passengers on those flights would have a day-long layover before connecting to Australia.

The second Sydney flight will enable connections in both directions from Australia to those three European cities for the first time. China Airlines' Rome service arrives back into Taipei mid-afternoon, creating a long layover for passengers connecting onwards to Australia.

The second Sydney service also accommodates growth, as well as spillover from the first Sydney flight resulting from inventory being reserved for European connections.

China Airlines' existing Sydney service is a red-eye in both directions, resulting in morning arrivals and onward connections. This requires 10 hours of ground time in Sydney during the day (previously used for a tag service to New Zealand).

The second daily flight will reduce ground time and improve overall utilisation, but brings time challenges. The new second flight will depart Taipei at 08:10 and then arrive back into Taipei at 19:50, limiting Asian connections in both directions. Although the flight will accommodate new connections to three European cities, Asia connections and local sales will be dampened. It will be challenging to travel from other Taiwanese cities (even on high-speed rail) to make the 08:10 Taipei Taoyuan departure.

China Airlines' Australia-Europe strategy is different from that of EVA Air.

EVA serves only one Australia/NZ market (Brisbane). In Europe EVA serves Amsterdam, London, Paris and Vienna. Paris is served nonstop due to traffic right limitations, whereas the other three destinations are served via Bangkok. This issue of a double connection and circuitous routing precludes a one stop strategy such as the one China Airlines is embarking on. EVA instead considers there to be strong opportunities to capture local traffic in the large Bangkok-Europe market, while EVA's small Taiwanese traffic will accept a stopover in Bangkok.

China Airlines also had a Bangkok stopover (its previous London service was nonstop) but transitioned its flights to nonstop. This change occurred significantly before the Australia-Europe focus; Amsterdam was the last service to go nonstop and did so in 2016. At the time it was unclear what the strategy was, since the local Taiwan-Europe market was small, while Bangkok afforded fifth freedom opportunities.

With the relaunch of London Gatwick, China Airlines is due to have 89 weekly flights to Europe (all nonstop) in Dec-2017, compared to 91 from EVA Air. EVA overtook China Airlines in Europe in 2013, although it is a small market for them, with less than three daily flights on average. 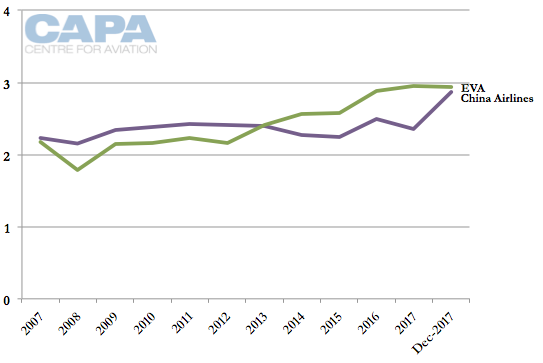 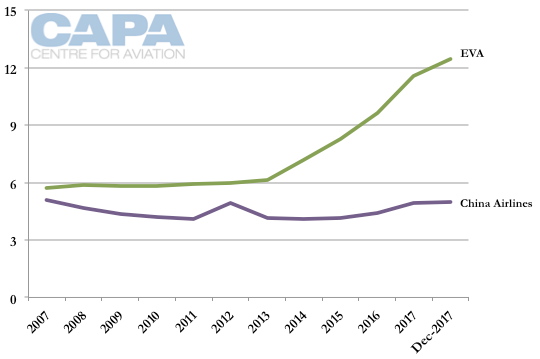 China Airlines aligns product and destinations, but competitors moving on from Kangaroo Route

The question is whether the result is worth it: Kangaroo Route traffic has seldom been a saviour for airlines.

Gulf airlines have been in Australia for 15 years, but only in the past few have they grown significantly. Nowadays Cathay Pacific and Singapore Airlines take Kangaroo Route passengers, but much prefer Australia-Asia and Europe-Asia connections, where the airlines have a higher number of unique city pairs compared to competitors, and the yields are higher. As China Airlines seeks a small fortune in the Kangaroo Route, the verdict from all but a few airlines is that the big opportunities between Europe and Australia are gone.

China Airlines and its Taipei hub are structurally different from other markets. A comparison with Hong Kong may be inevitable: Taipei and Hong Kong are 501 miles apart (Doha and Dubai are 235 miles apart). Taipei has less high-yielding traffic, a strong local competitor (EVA) that is free of the government ownership that often plagues China Airlines, and aeropolitical differences. Taiwan has open skies with Japan but is restricted to Korea, while the cross-Strait mainland China-Taiwan market is heavily curtailed. All of these limit opportunities to connect traffic and broaden what can be reaped from Taiwan's relatively small catchment area.

In recent years EVA Air has been Taiwan's standout performer and has aggressively grown in North America – its nearly singular focus. China Airlines, in comparison, was already big, but losing market share and lacking a vision. China Airlines can now boast of a Europe-Australia focus. That indirectly helps China Airlines in point-to-point, but also Europe-Asia and Australia-Asia connections.

China Airlines has long been held back by government interference. The Australia-Europe strategy brings together China Airlines' developments over many years, and via a revolving door of senior managements. Europe-Australia is also a strategy by default – easy to assemble, since many of the building blocks were already there.

Yet Kangaroo Route traffic does not have a strong potential outlook for China Airlines. The individual planks – serving London and Europe nonstop, a second Sydney flight – do not appear strong on their own. China Airlines will be hoping the sum is greater than the parts - but that is not necessarily the case. At worst, addressing one problem may be creating a second larger problem.

Becoming a stopover on the Kangaroo Route may be innovative for Taiwan. Yet what China Airlines – and therefore Taiwan – needs is the exit of government interference and the ability to create and execute a long term strategy. Following EVA's North America strategy may not be original, but is more assured.