However the airlines expect an improvement in profitability in the current quarter and the second half of the year, which is traditionally a stronger period for earnings.

China Airlines stated its third quarter profit may cover the losses from the first half of the year as it benefits from strong seasonal passenger demand, load factors averaging above 80% and lower oil prices. EVA Air similarly stated it expects to report its best 2011 quarterly results in 3Q2011 as travel to Japan improves following the Mar-2011 earthquake and tsunami, cross-Strait capacity rises and oil prices ease.  Fuel costs account for 40-45% of the carriers’ expenses. The airlines have also noted that demand on US and European routes is rising.

China Airlines, as expected, reported a first half net loss of TWD661 million (USD22.8 million), compared with a profit of TWD6.27 billion (USD216 million) a year earlier, according to its filing. China Airlines’ operating result also reversed, from a profit of USD236 million in 1H2010 to a USD10.4 million loss in 1H2011. Operating and net profit margins for both carriers were weak in the first half, at under 1.5%. 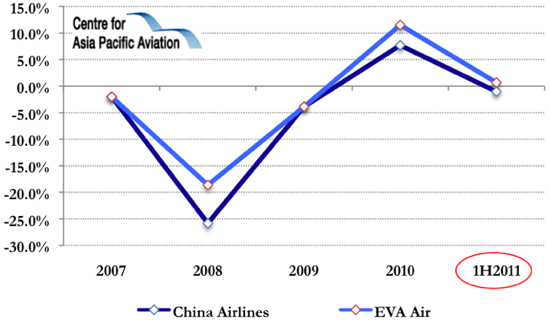 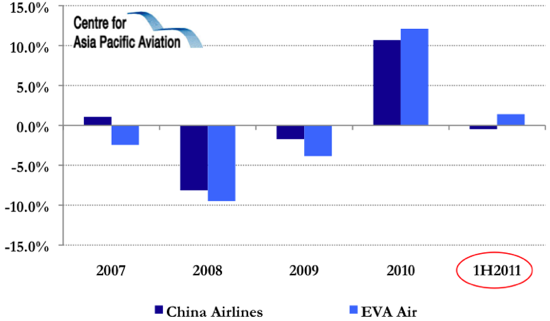 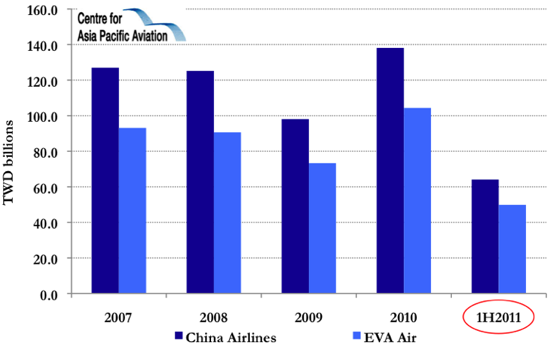 Despite rising oil prices, China Airlines posted a smaller-than-expected quarterly loss for the second quarter as it hedged against higher fuel costs, according to reports in the local media. The carrier narrowed its quarterly loss to TWD282.41 million (USD9.72 million) during the three months to Jun-2011 from a loss of TWD379.09 million (USD13.1 million) for the first three months. The results exceeded most analysts’ expectations of widening quarterly losses, given higher crude oil prices. EVA Airw posted a net profit of TWD63.88 million (USD2.2 million) for the second quarter, marking a 76% year-on-year decline. 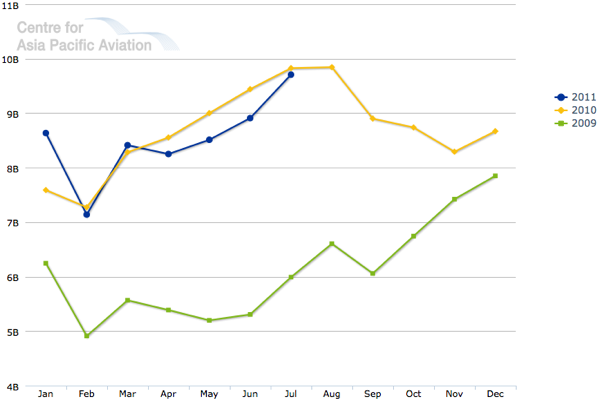 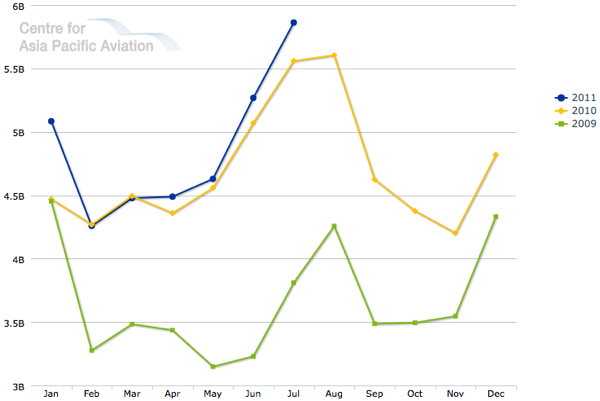 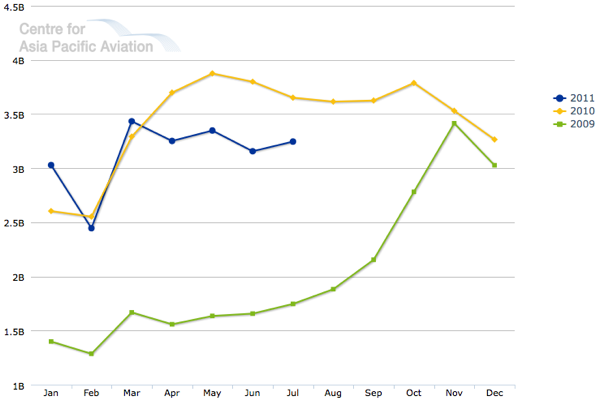 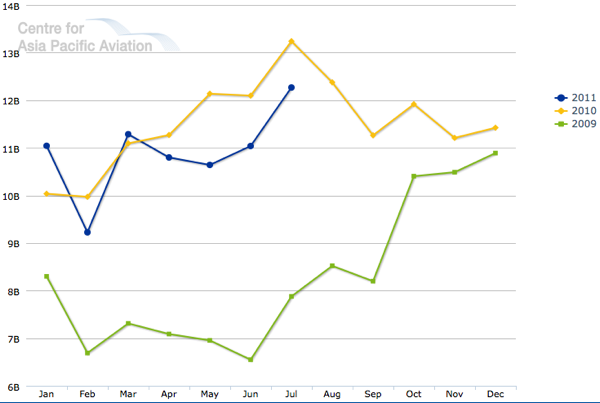 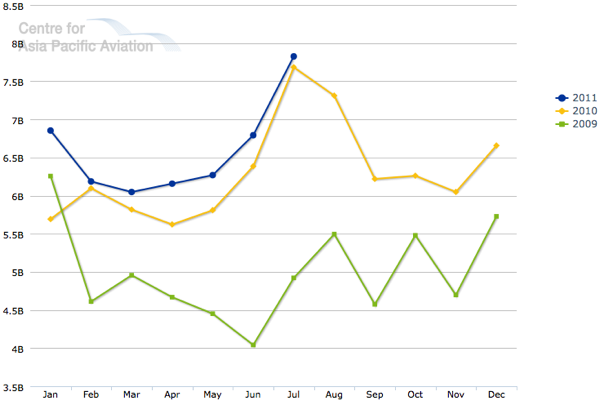 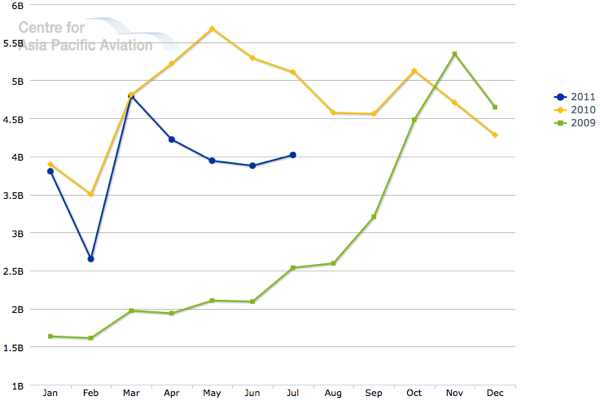 In Jul-2011, EVA Air and China Airlines reported yield declines for their respective cargo operations, of 8.5% (to USD 25.27 cents) for EVA and 8.1% (to USD 27.86 cents) at China Airlines. China Airlines and EVA Air have both witnessed declining cargo yields, on a year-on-year basis, for the past four months. 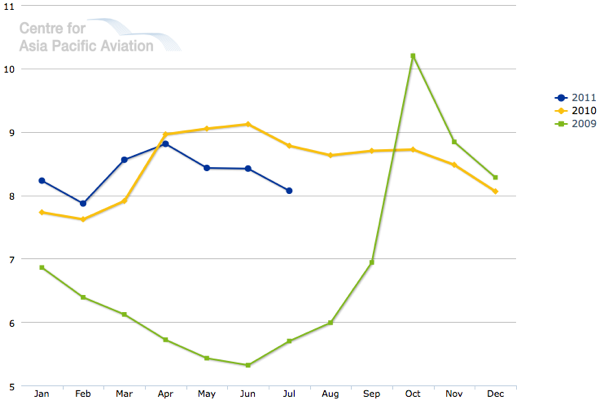 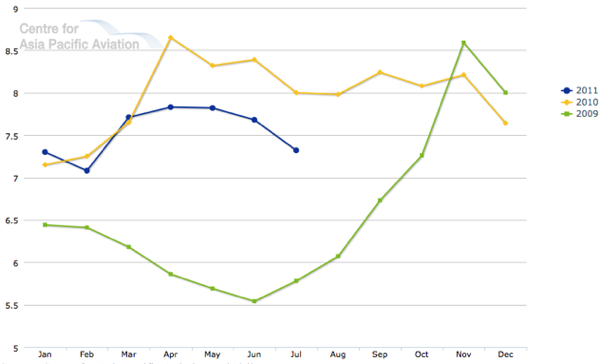 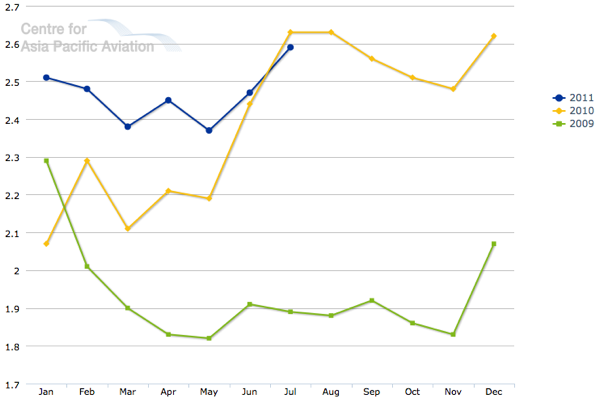 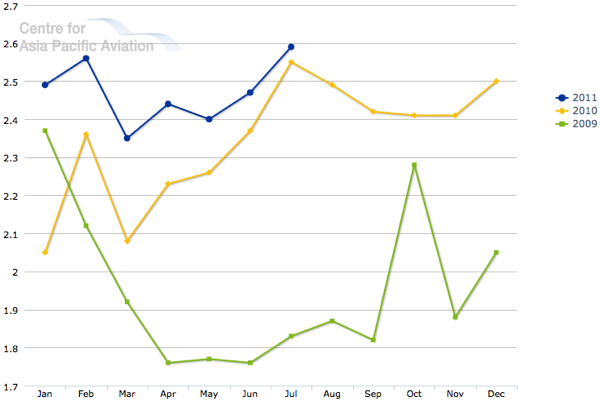 EVA Air handled 626,556 passengers in Jul-2011, a 10.1% year-on-year reduction, with the larger China Airlines also reporting a passenger decline of 2.6% to 1.0 million, marking the third consecutive month of passenger declines. 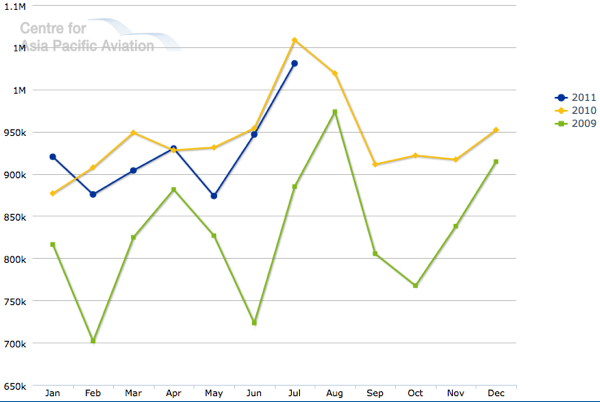 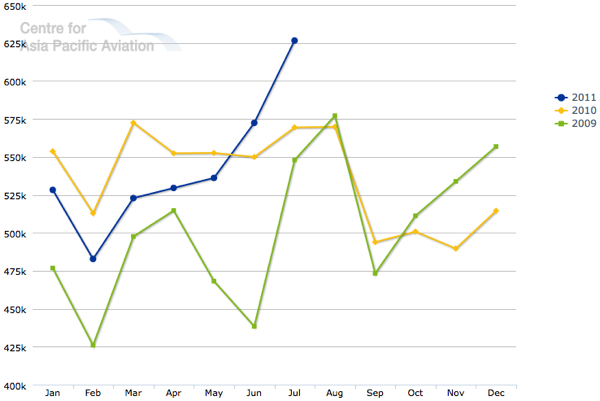 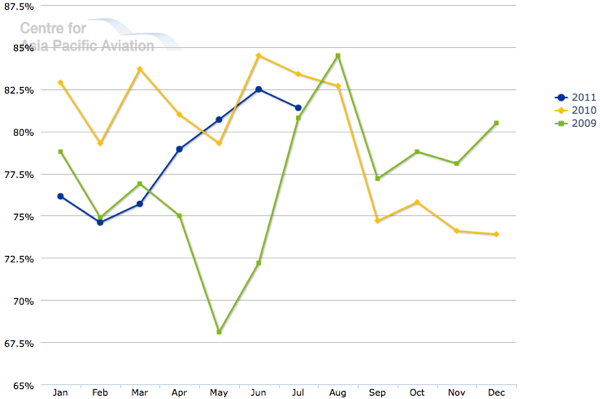 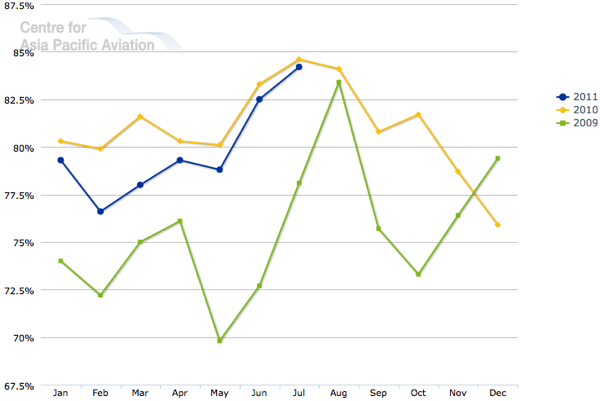 Cargo traffic at both carriers also weakened with cargo load factors also declining, by 4.1 ppts to 81.2% for EVA Air and by 0.3 ppts to a weaker 70.6% for China Airlines. 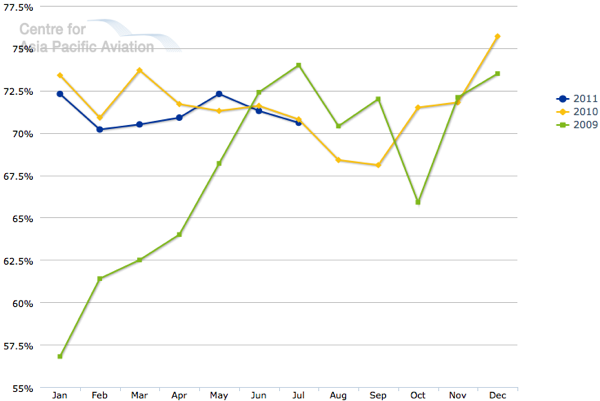 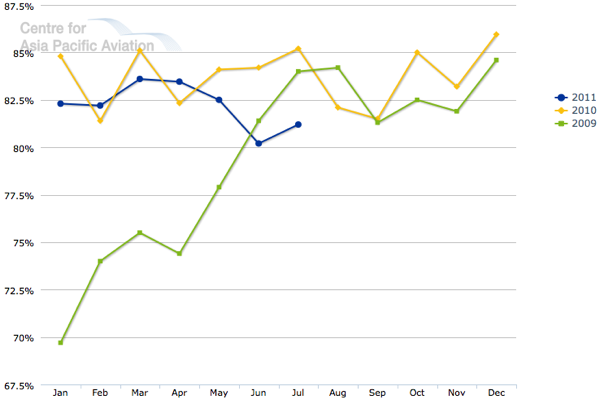 EVA Air is expecting to report a 10.1% year-on-year growth in passenger numbers to 7.1 million this year on the back of the opening up of cross-Strait flights and capacity. The carrier is also expecting a 4.1% increase in cargo traffic to 885,000 tonnes.

Taiwan and China in Jun-2011 agreed to increase the number of weekly cross-Taiwan Strait services by 50% from 370 to 558. Carriers on each side were allocated an additional 94 weekly services through the new agreement to cater for increased travel across the Taiwan Strait amid improved bilateral ties and travel demand. The increase follows an expansion in weekly services in 2010 from 270 to 370, reflecting booming trade and travel between the mainland and Taiwan.

Forty-two of the proposed 188 additional cross-Strait services were scheduled for launch in Jul-2011 including one Taipei Taoyuan-Beijing service, three on Shanghai services, seven for Wuxi, seven for Sanya and three on the recently added Yancheng with "redeye" night services to Beijing and Shanghai added at the same time, according to Taiwan’s Civil Aeronautics Administration (CAA). The remaining 142 frequencies will be added by the end of the 2011/12 northern winter schedule, covering 10 more airports including Guangzhou, Shenzhen and Nanjing.

From Taiwan, additional services will be operated by six Taiwanese airlines, including the recently reinstated Far Eastern Air Transport. No more than two airlines will operate on any given sector. Under the agreement, China Airlines and EVA Airways Corp, the two largest operators on cross-Strait services, received 19 additional flights. Civil Aeronautics Administration (CAA) Deputy Director-General Lee Wan-lee stated the two airlines were each given 19 additional flights because of the size of their fleets, as well as their past record of complying with government policies.

With the addition, Taiwanese carriers will offer up to 279 flights to 41 mainland destinations per week. Their cross-Strait counterparts will offer the same number of services to nine Taiwanese cities, with Tainan the latest addition. Of the 94 new regular flights, five were previously charter services that were offered on demand only, including two services from Greater Taichung to Wuhan and Zhengzhou in Hubei and Henan provinces respectively, two from Hualien to Hanzhou, Zhejiang Province, and Wuhan, and one from Hualien to Nanjing.

It has become a fragmented market, as CAPA's Route Analyser shows. 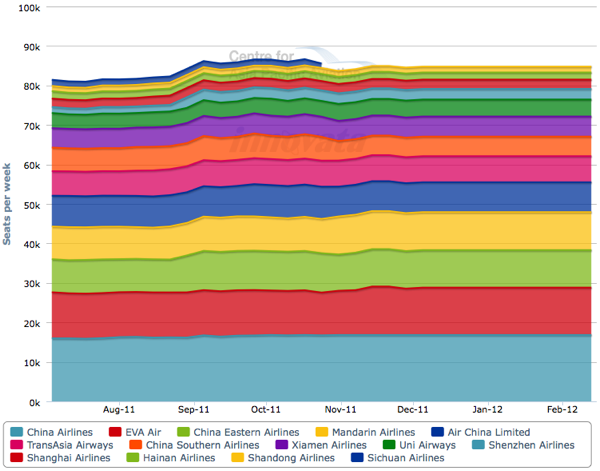 Meanwhile, Taiwan allowed individual tourists from China to visit from the mainland for the first time in more than six decades from 28-Jun-2011. Independent Chinese tourists may bring revenue of between TWD9.1 billion (USD315 million) to TWD19.5 billion p/a, if the 500 visitors spend an average USD245.43 and stay for a week to the maximum 15 days, the Taiwan Tourism Bureau has forecast. The decision to relax the decades-old ban on travel to Taiwan by individuals occurred under a pilot scheme from 28-Jun-2011, meaning individual travellers from the mainland are now able to visit the island. Up to 500 individual travellers from Shanghai, Beijing, and Xiamen are permitted to travel to Taiwan per day. They will be allowed a maximum stay of 15 days.

China Airlines and EVA Air have called for the number of daily travellers to be increased, stating the opening of individual travel will not bring any immediate benefits in the short-term due to the restrictions on the number of tourists and the number of destinations. Chinese tourists have been officially allowed to travel to Taiwan since Jul-2008, although travel was restricted to package tours. Allowing individuals may take Chinese arrivals to four million in 2012 from less than 200,000 in 2008, adding USD4.59 billion to GDP by 2012, Barclays Capital estimates.

However, the carriers’ profit-making ability on the cross-Strait services is being regulated. Civil Aeronautics Administration Director General Yin Chengpong stated China Airlines and EVA Air have cut cross-Strait fares to Beijing and Shanghai by a further 20% effective 13-Jul-2011, after encouragement by the CAA. The CAA in Aug-2011 also set a limit on the maximum airlines can charge for cross-Strait air tickets, including no more than TWD15,000 (USD517), with one-year validity to Shanghai and TWD17,000 (USD586) to Beijing during the 2011 Chinese New Year holiday period. The new policy is applicable to Taiwanese carriers only.

Both carriers have also discussed the possibility of launching direct air services between Yancheng City and Taiwan. Under initial plans, China Airlines will launch a twice-weekly service while EVA Air will launch a weekly service to Yancheng from Sep-2011 at the earliest.

Despite the Mainland services expansion, Taipei-Hong Kong remains the largest route in terms of capacity (seats) both for both carriers. 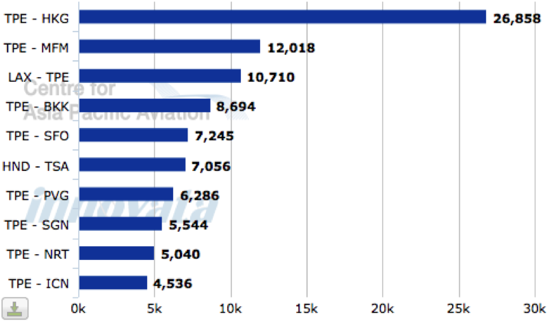 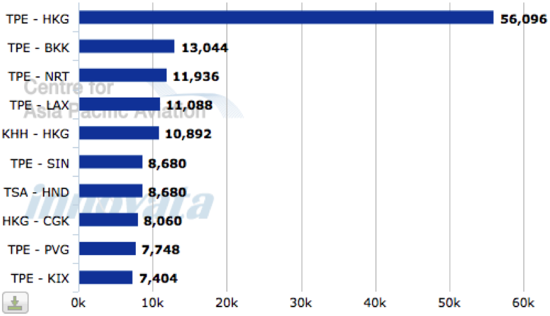 In other network news, China Airlines announced plans to increase Taipei-Hiroshima frequency from six times weekly to daily from 30-Oct-2011 due to rising demand. The carrier reported a load factor of 73.4% in FY2010 on the route, the highest load factor of the six international scheduled routes from Hiroshima Airport.

The carrier also plans to resume its fifth weekly Taipei Taoyuan-Sydney frequency under the northern winter schedule. China Airlines is the sole operator on the Taipei Taoyuan-Sydney route and carried an estimated 50,000 O&D passengers in the past year, 64% of the total 77,000 passenger market. There is a large slippage via Hong Kong through Cathay Pacific and Qantas Airways. The carrier uses A330-300 equipment on the route. 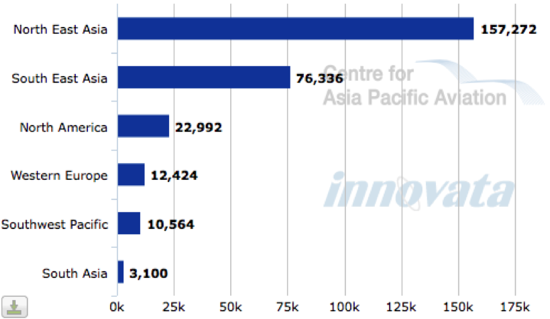 The carrier is also resuming Taipei Taoyuan-Sendai scheduled services from 30-Oct-2011. Charter services continue to operate twice weekly, the same level prior to 11-Mar-2011 earthquake and tsunami. A330-200 aircraft will be deployed on the route. EVA Air has announced plans to increase Taipei Taoyuan-Bangkok frequency from 13 to 15 times weekly from 30-Oct-2011.

Also from the winter 2011/12 schedule, EVA plans to increase Taipei Taoyuan-Seattle frequency. The carrier will operate four times weekly service over the winter schedule, increasing to five times weekly from 16-Nov-2011 and 31-Jan-2012 with the additional frequency to be operated with B747-400 rather than B777-300ER equipment. The airline is the only operator on the route. EVA Air has a larger presence in North America (by seats) than China Airlines. 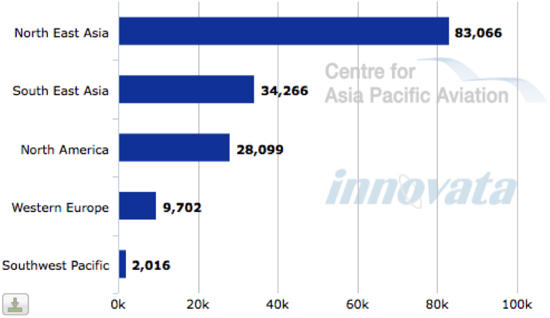 In line with the booming development of the cross-Strait routes in particular, China Airlines Chairman Zhang Jiazhu in Jun-2011 stated the carrier would expand fleet to more than 100 aircraft in the next five to 10 years. The company has 68 aircraft in its fleet, including 49 passenger aircraft and 19 freighters, based on company reports.

China Airlines Chairman Chang Chia-juch, meanwhile, has stated the carrier may seek strategic investors to help finance a planned 25% fleet expansion. The carrier plans to introduce 20 new A350s and replace six A340s by 2015. China Airlines and Mandarin Airlines will have a combined fleet of 80 leased aircraft by early 2011 and China Airlines has already ordered 14 A350-900s, which are expected to be delivered by 2015.

The carrier has also stated it is considering commencing advance payments on the carrier’s newly ordered aircraft and other small- and medium-sized passenger and cargo fleet this year as well as increase its capital by issuing 568.4 million ordinary shares for a price of TWD10 per share, for a total issue amount of TWD9000 million (USD312.8 million) at a tentative price of TWD16 per share, in an effort to lower the carrier’s debt ratio. The carrier’s debt ratio of 76% is higher than the 70% average for 15 major carriers in the Asia Pacific region.

Meanwhile, EVA Airways President Chang Kua-wei, also in Jun-2011, stated the carrier would acquire 20 aircraft to meet robust demand from China. "Our capabilities are still unable to meet the strong demand for the flight services between Taiwan and the Chinese mainland. Looking ahead, EVA Air is considering purchasing more narrowbodied passenger planes, like A321...to replace the existing MD planes," he said.

Also in Jun-2011, the carrier stated it has leased three new A330-300 passenger aircraft, expected to enter service in 4Q2011. The carrier stated the new aircraft would be deployed on Northeast Asia services including from Taipei Taoyuan to Japan. EVA Air President Chang Kuo-Wei has stated the carrier plans to invest TWD100 billion (USD3.5 billion) to acquire 25 aircraft as early as 2H2011. The airline plans to acquire 10 B777-300ERs and 15 A320s.

China Airlines and EVA Air optimistic about improvements in 2H2011

China Airlines Chairman Zhang Jiazhu has stated he remains optimistic about the carrier’s prospects in the second half of the year despite a tough 1H2011, characterised by high oil prices and slackening demand. EVA Air Vice Chairman Cheng Kuang-yuan, meanwhile, has stated the worst is over for the airline industry. He said US and Japan routes would go back to normal during 3Q2011, adding that the company is seeking to maintain 2Q2011 earnings at the same levels as in 1Q2011. During 2H2011, the carrier’s operational result will improve if oil prices stabilises. 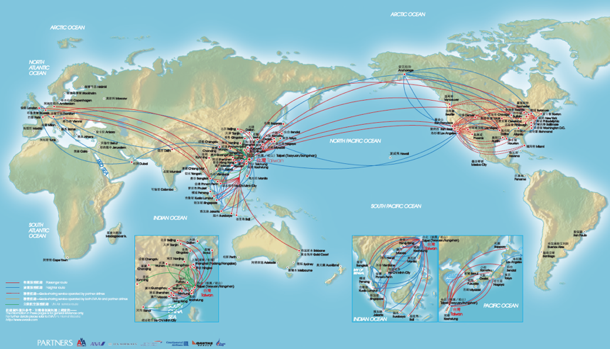 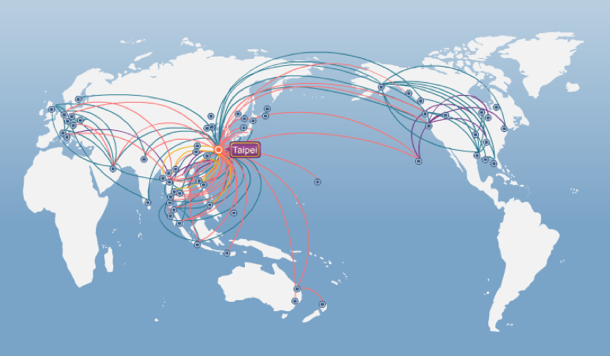 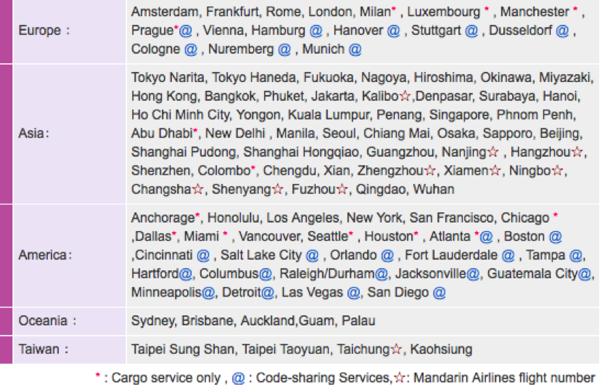 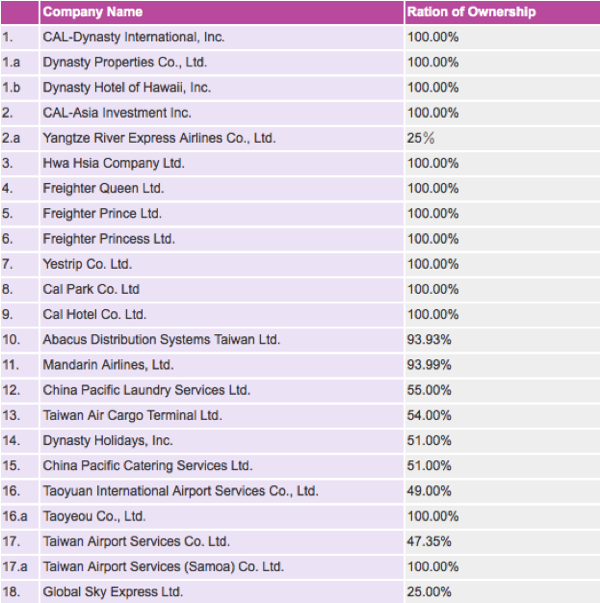