Profits at every publicly traded LCC in Southeast Asia were down in 4Q2013 and are likely to fall further in 2014 due to overcapacity and intensifying competition. But Cebu Pacific’s medium to long term outlook remains bright as it enjoy a leading position and first mover advantage in its home market

Cebu Pacific has a particularly strong and improving position in the Philippine domestic market. Of the five main domestic markets in Southeast Asia, only the Philippine market is now seeing some rationalisation of competition and capacity. The acquisition of Tigerair Philippines will boost Cebu’s market share at the same time as reducing competition – but there will be some short-term pain as Tigerair Philippines is expected to remain unprofitable for at least another year.

Revenues were up 8% for the full year but only 4% in 4Q2013. The slowdown in the fourth quarter came as domestic passenger traffic declined 3% due to Typhoon Yolanda. 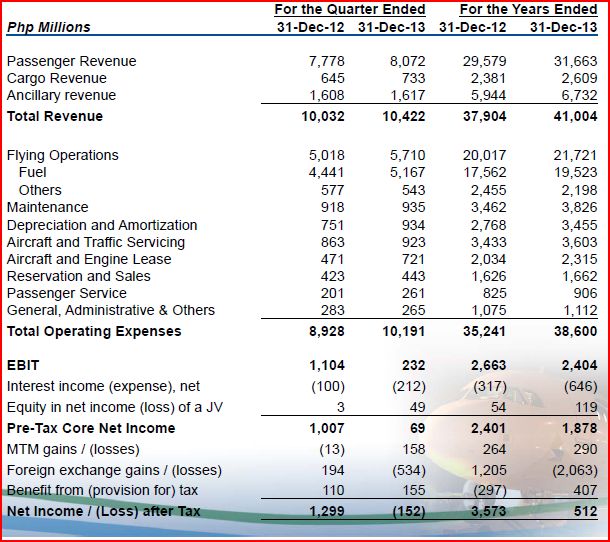 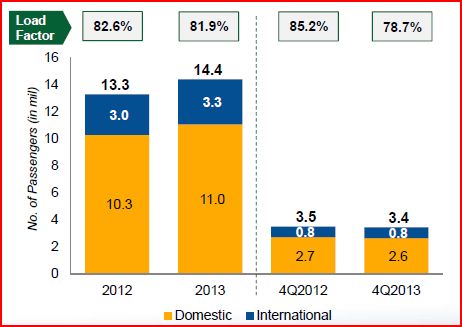 Cebu's launch of long-haul services partially explains the increase in average fare. But the main driver was an improvement in domestic market conditions as the carrier only currently operates one long-haul route, a daily Manila-Dubai service which was launched in early Oct-2013.

While most of Southeast Asia’s domestic markets are now suffering from overcapacity and hyper-competition, the Philippines has managed an unusual level of consolidation in 2013 as Philippines AirAsia merged with Zest Air (now known as Zest AirAsia) and the Philippines Airlines (PAL) Group exited the LCC sector as AirPhil Express rebranded as PAL Express.

Probably as a result of these changes, total domestic traffic in the Philippines was down by 1% in 2013 to 20.3 million passengers, according to the Philippine CAB data. The PAL Group saw an 8ppt drop in market share from 42% to 34% as it reduced capacity following the early 2013 strategy shift when the group exited the budget end of the market.

PAL Group budget subsidiary AirPhil had been used alongside the main PAL brand on domestic trunk routes but in early 2013 AirPhil dropped services on all major domestic routes as it was rebranded PAL Express. PAL meanwhile was removed from all other domestic routes and replaced by PAL Express, which now operates under a full-service regional model. Domestic passenger traffic at the PAL brand was down by 37% in 2013 to 2.6 million while domestic passenger traffic at AirPhil/PAL Express was down 2% year over year to 4.4 million, according to Philippine CAB data. 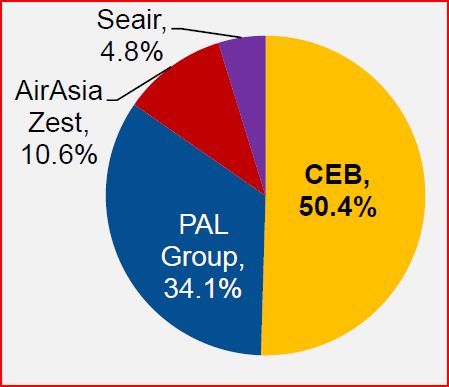 Market consolidation is continuing with Cebu Pacific’s acquisition of Tigerair Philippines, which was announced in Jan-2014 and is now expected to close by the end of Mar-2014. As CAPA previously reported, Cebu Pacific is in position to further increase its share of the Philippine domestic market in 2014 as it takes over Tigerair Philippines and continues to expand its own domestic operation.

Cebu Pacific told analysts during the carrier’s 4Q2013 results briefing that excluding Tigerair Philippines its domestic capacity is expected to end 2014 6% to 8% above 2013 levels. The group will essentially increase domestic capacity by approximately another 7% – for a total of about 14% – from the nine months of 2014 that it will operate Tigerair Philippines as a subsidiary (assumes the deal will close at the end of Mar-2014 as currently anticipated).

While Southeast Asia’s other domestic markets continue to suffer from overcapacity, the Philippines seems to have achieved a greater level of stability in what is a highly price sensitive market. The Philippine domestic environment could consequently be the one bright spot in otherwise challenging market conditions across Southeast Asia.

But there are still huge challenges confronting Cebu Pacific and the Philippine market generally. Cebu Pacific faces intensifying competition in the international market and domestically it needs to successfully turn around the Tigerair Philippines operation.

Tigerair Philippines incurred a loss of about PHP2.3 billion (USD54 million) in 2013 despite operating only a fleet of five aircraft. Cebu Pacific is confident it can boost the carrier’s revenues and yields by leveraging Cebu’s sales channels while lowering costs through improved economy of scale. Cebu Pacific has been working on integration in order to enable Tigerair Philippines' flights to be sold on the Cebu Pacific website as soon as the USD15 million deal closes.

These aircraft will be returned to Tigerair Singapore, which also has entered into a strategic partnership with Cebu Pacific that will include jointly operating Singapore-Philippines flights, pending approval from competition authorities, and offering joint itineraries with connections beyond Singapore and Manila.

But internationally Cebu Pacific faces increasing competition within the region as carriers add capacity in virtually every market it serves. The Philippine-Japan market has particularly become competitive as all Philippine carriers have started using traffic rights that became available from a new air services agreement forged by the two countries in 2013. Cebu Pacific currently only serves one Japanese destination, Osaka, but is launching service to Tokyo Narita and Nagoya on 30-Mar-2014.

Cebu Pacific also faces challenges with its new long-haul operation. As CAPA previously reported the Dubai route started poorly with an initial load factor of only 36% in Oct-2013. The load factor on Dubai improved to an average of 60% in Jan/Feb-2014 but the carrier is still struggling with point of sales on the Dubai end.

The Philippines-UAE market has become extremely competitive as Emirates has added capacity while the PAL Group also launched services to Dubai and Abu Dhabi. Cebu Pacific will face similar challenges as it expands its long-haul operation to include other destinations in the Middle East as PAL has launched services in recent months to the same destinations.

Cebu Pacific took delivery in Feb-2014 of its third A330, which for now it is using in the domestic market. But the carrier plans to deploy this aircraft, and two more A330s due in 2014, to launch services to Saudi Arabia and Australia.

As a result of this expansion Cebu Pacific expects long-haul ASKs to be up 400% year-over-year in 2014, driving 15% to 20% overall ASK growth. The carrier plans to grow capacity in its short-haul international network in the high single digits. 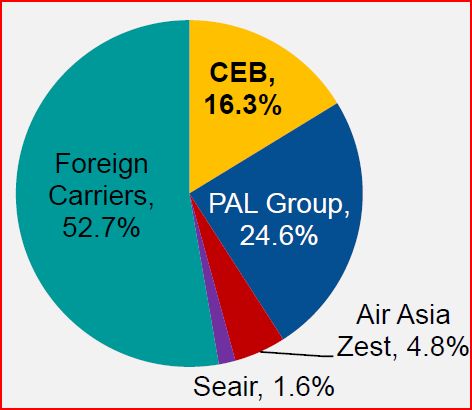 In 2013, Cebu Pacific ASKs were up 14% year over year with 20% growth in the international market (driven in part by the three months of the Dubai operation) and 8% domestic growth. On a seat basis, international capacity was up 13% (illustrating the considerable growth in short-haul international) and domestic was up 8%.

Cebu Pacific capacity expansion is ambitious but not overly aggressive

Cebu Pacific is also placing back into service an A320 which was damaged in a Jun-2013 runway overrun – which gives the carrier some extra capacity as it starts moving over some of its A320 family aircraft to Tigerair Philippines.

But unlike other major LCC players in Southeast Asia Cebu Pacific has a relatively conservative and flexible fleet plan which could become a major advantage as some of its competitors may have over ordered.

Cebu Pacific is well positioned to leverage its leading position in the Philippine domestic market with capacity and competition moderating in the new more stabilised conditions.

But in the Philippine international market competition is growing – in some cases to unsustainable levels. It is here that Cebu Pacific has the potential – and the need – to leverage its low cost base, strong brand and first LCC mover advantage.