Cebu Pacific gained in its trading debut in Manila after the carrier completed the nation’s largest IPO in five years. Shares in the carrier opened at PHP132 (USD3.06), a 5.6% premium on its issue price, closing up 6.4% at PHP133. The Philippine stock market has risen more than 40% this year, the second best performer in Southeast Asia after Indonesia, and closed at a record high yesterday.

According to Bank of the Philippines Islands: “Cebu Air offers a good play on Philippines tourism and a proxy on consumer spending. At its IPO price, the stock is valued at 13 times estimated earnings, which is cheaper than the overall market.”

Shares in Skymark Airlines declined 4.3% following a strong week as the Japanese LCC’s shares soared on news it more than doubled its net income forecast for the 12 months ended Mar-2010 to JPY5500 million (USD67.8 million) on the back of strong sales.

Shares in Hainan Airlines gained 10.1% upon the release of an investment filing in the Chinese market. 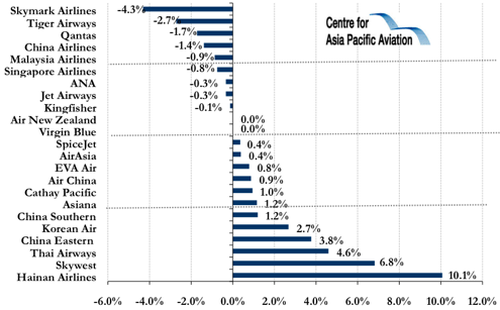