Cathay Pacific Group stated it experienced a “continuing and significant” recovery in its core business during 1H2010, following what the carrier labeled as extremely challenging conditions in much of the previous year. The carrier added that the turnaround in business that began in 4Q2009 continued into 2010 and gained momentum, with both the passenger and cargo businesses of Cathay Pacific and Dragonair performing well with revenues continuing to increase despite uncertainty over the stability of the global economy.

See related report: Cathay Pacific: No time to get excited, but performing better over long term than Singapore Airlines

Source: Centre for Asia Pacific Aviation & Cathay Pacific
*Based on the conversion rate at USD1 = HKD7.7658

The Cathay Pacific Group reported a USD881 million net profit and a USD918 million operating profit in the six-month period, up 742% and 249%, respectively, as revenues surged 34% to USD5.3 billion. 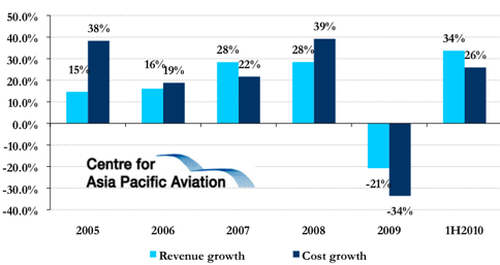 The carrier reported double-digit operating and net profits margins in the period, of 17.2% and 16.5% respectively. 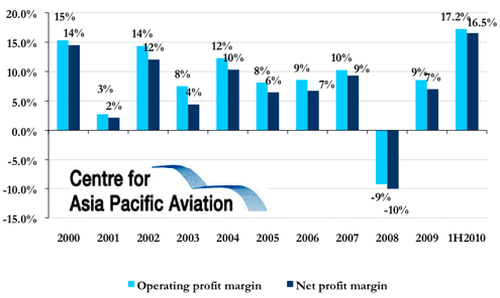 The carrier stated demand for economy class remained “robust”. Economy load factors were generally high, as they were during much of the previous year, and economy yields also improved significantly during the period.

The carrier added that there was a corresponding rise in corporate sales, particularly in the key Hong Kong market, during the period, with yields improving significantly, though premium class traffic and revenue were both still below pre-downturn levels.

Cathay and Dragonair handled 13.0 million passengers in the six month period, an 8.5% year-on-year increase despite a 0.1% capacity (ASKs) reduction, with a 5.5 ppt load factor improvement. 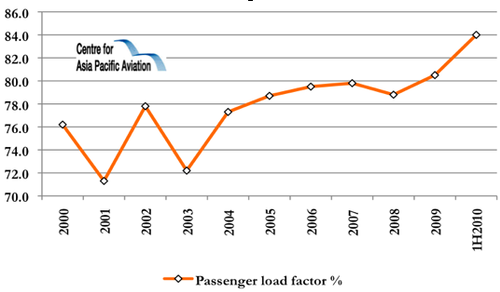 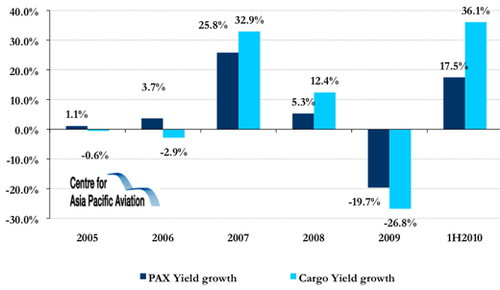 Capacity, which was reduced in 2009 in response to the economic downturn, was gradually restored by both Cathay Pacific and Dragonair in the half, with the carrier stating that at the end of Jun-2010, capacity, “capacity had almost been restored to pre-downturn levels”.

During the six-month period, Cathay’s fleet was strengthened by the addition of four new B777-300ERs. The carrier added that of the six passenger aircraft parked in the desert, the four A340-300s will be returned under terms of their operating leases in 2011, leaving two B747-400s grounded. 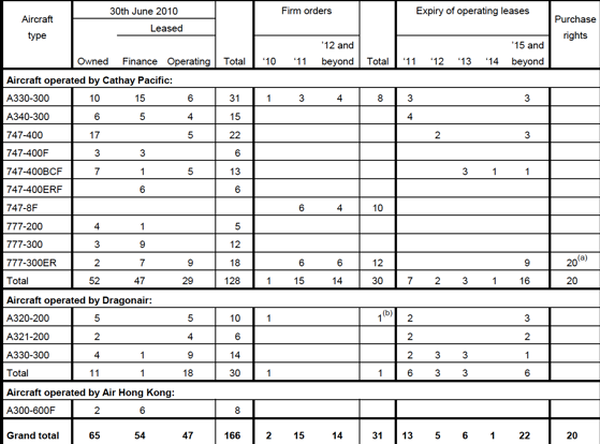 However, the most interesting fleet news was the announcement by Cathay Pacific of its intention to purchase 36 new aircraft, valued at approximately HKD75 billion (USD9.7 billion), as follows:

Mr Pratt described the carrier’s cargo business as “very robust” through 1H2010, with strong demand in all key markets. The cargo load factor increased by 11.8 ppts year-on-year, reaching a record of 78.0%. As a result of the stronger demand, the carrier stated that, by Jul-2010, it had brought back into service all five aircraft parked in the desert during the 2009 downturn.

In 1H2010, freight volumes handled by both airlines increased by 24.4% to 872,000 tonnes, with cargo revenue increasing 63.1% USD1.5 billion, while yields soared 36.1% (off a very weak base) to USD 29.10 cents. This strong growth occurred despite continued economic uncertainty, particularly in a number of Eurozone economies. 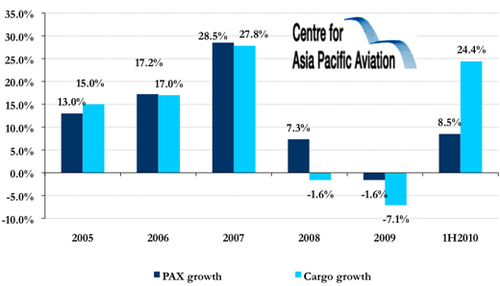 During the first half, Cathay reported a 26% increase in operating costs, to USD4.7 billion, as part of which fuel costs increased 98% to represent 36% of the total. The carrier expressed concerns about the potential rise in fuel costs. 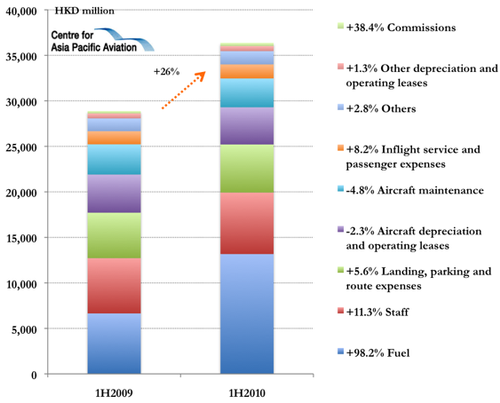 The carrier’s also announced details of a few key developments in the period, as follows”

The outlook for Cathay Pacific Group is now much improved, after a very challenging 2009. In 2010, Cathay has “been able to get our business back on track”, with capacity being restored, an improvement in its financial situation and a strengthening of the carrier’s balance sheet.

Mr Pratt commented that, on present trends, the carrier expects continued strength in its financial results in 2H2010, although he cautioned that conditions can change rapidly in the airline industry. A key concern centres on a potential further increase in fuel prices or any return to the recessionary economic conditions of 2008 and much of 2009.

However, in the long-term, he stated the carrier remains confident of its long-term future, adding that it has a “number of things working in our favour, including our capable, supportive and committed team, a superb international network, effective management of costs, our quality service and product offering, a strong relationship with Air China, and our position in Hong Kong – one of the world’s great cities and a premier international aviation hub. These core strengths will, I believe, ensure the continued success of the Company”.