The significant increases in yield the Cathay Pacific Group enjoyed with its acquisition of Dragonair in Oct-2006 have vanished as a result of the global financial crisis. Releasing its interim financial results for the six months ended 30-Jun-2009, Cathay revealed its passenger yield slumped 19.7% year-on-year in the period, while cargo yield fell a massive 32.8%. The decrease in yields carved over USD1 billion from Cathay’s first half revenue (USD690 million from the passenger business, USD395 million from cargo). It could take years to recover these falls. 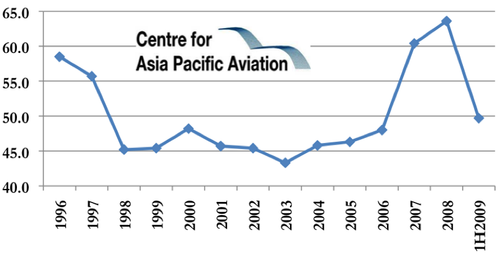 Cathay’s 1H2009 cargo yield in actual terms (HK cents) was, quite astonishingly, 2.4% below levels established in 1998 during the Asian Financial Crisis and some 35% below full-year 2008 levels. 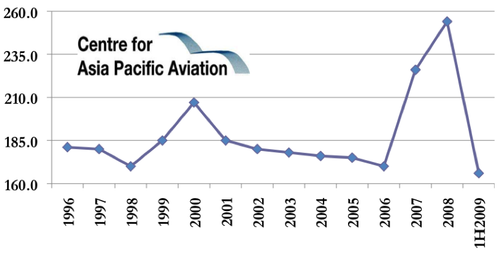 Ekes out a profit, thanks to fuel hedge gains

Cathay returned to profit in the first half thanks to a USD271 million fuel-hedging gain, which helped offset a steep reduction in traffic.

Cathay Pacific Chairman, Christopher Pratt, stated, “the global aviation industry, hit hard by soaring fuel prices in 2008, is now having to confront one of the most severe demand downturns in living memory”. He added, “there are cautious signs that the fall in demand has bottomed but there is, as yet, no indication when a sustained pick-up will begin. The recent strengthening of fuel prices is a cause for concern”.

Mr Pratt concluded, “despite today’s difficult economic conditions Cathay Pacific remains confident in its future. The Company has a capable, committed workforce and management team and a superb international network centred on Asia’s premier aviation hub.  Cathay Pacific will be in a strong position when the business rebound comes”.

However, Hong Kong Airport was overtaken in Jun-2009 by Dubai Airport, in terms of total passenger throughput, and faces long-term competitive issues. The liberalisation of cross-Strait services between Taiwan and the Mainland, the growth of Emirates and other Middle East carriers in long-haul markets, as well as increasing incursion by low cost carriers in short-haul markets, could pressure Cathay Pacific’s ability to recover the deep falls in yield experienced over the past 6-12 months.