WestJet, which is seeking to expand its international presence, had previously attempted to reach a codeshare agreement with Southwest Airlines, but the deal fell through.

Cathay’s shares were 3.8% higher on Monday.

Thai budget carrier, Nok Air, has plans to expand its fleet and resume international services in 2012-13, according to a report in the Bangkok Post. The airline plans to lease four B737-400s and four ATR 72s in the near term, as well as six B737-800s in the longer term to support its expansion.

Thai Airways, which owns 39% of Nok Air, is setting up another LCC with Singapore’s Tiger Airways. Thai’s stock slumped 4.2% on Monday. 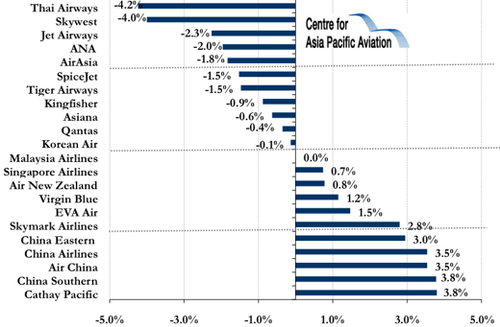