Cathay Pacific cautious about sustainability of rebound in traffic and yields. Cargo softening

Cathay Pacific’s shares eased 1% on 12-Jul-2010 as it noted that premium demand, while continuing to improve, still remains below 2008 levels. The carrier also issued a caution regarding the sustainability of current strong growth trends later this year. Combined Cathay Pacific and Dragonair passenger numbers surged 27.5% year-on-year in Jun-2010 to 2.22 million, off last year’s low base. An airline spokesman noted: "Demand in June remained high in the build-up to the summer peak, as we continued to restore capacity that was cut in response to the huge downturn in business in 2009.”

He added: “We enjoyed increases in volumes and yields compared to the previous year across most routes. Premium cabins saw a continuation of the pick-up off a low base in 2009, though volumes still remain below 2008 levels. Overall, we expect to see strong demand throughout July and August, although we view the sustainability of the current robust revenue trends towards the end of the year with a degree of caution.”

Passenger load factors surged 8.6 ppts to 85.4%, while capacity for the month, measured in available seat kilometres (ASKs), was up by 7.7%. In the first half of 2010 the number of passengers carried was up by 8.5% compared to an ASK reduction of 0.1%. 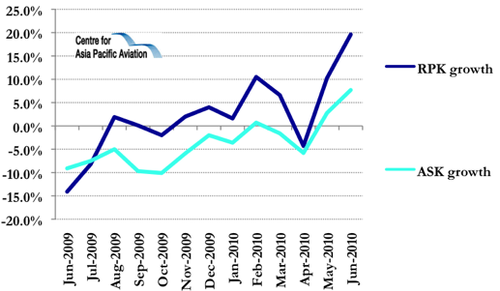 Cathay stated: "We saw some softening in the market in June compared to previous months and the increase in tonnage was only just ahead of the increase in capacity for the month. However, overall demand remained robust out of the key Hong Kong and Shanghai markets, particularly on transpacific routes. The Japan market has also been performing well. In terms of capacity, we have now brought back all parked freighters from the desert, though one Boeing Converted Freighter will transfer to the cargo joint venture with Air China in August.” 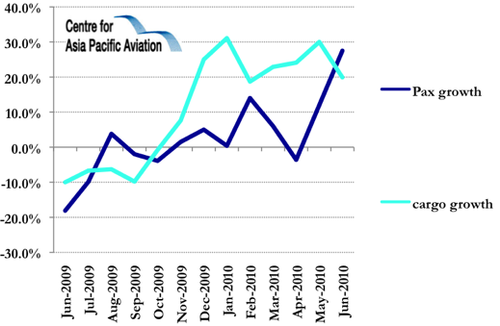