The Cathay Pacific Group has reported a rise in profit but has only moved from a meagre 2.1% operating margin to a weak 3.1%. The outlook continues to be subdued as Cathay largely banks on time: for the A350's Feb-2016 arrival to reduce costs and Hong Kong's forthcoming runway saturation to limit direct competition. But even then markets will be more competitive and Cathay will be sharing space in North Asia with more airlines, with improving brands, than in the past.

Cathay Pacific managed 5.3% ASK growth but this came at the expense of a 3.5% drop in yields. North America, Cathay's largest market, saw yields decline 4.4%, and this over-capacity market will get worse – possibly well into 2015. Only Europe saw gains across capacity, load factor and yield. Freight continues to be a problem and dedicated freighters are losing emphasis as Cathay carried as much freight in passenger aircraft bellies as dedicated freighters. Increasing costs are also a problem but Cathay is becoming less worried about Jetstar Hong Kong, although Chairman John Slosar repeated vague statements that Jetstar could not have "free use" of Hong Kong rights "without giving up" unspecified interests – possibly Australian bilateral access – in exchange. Nonetheless, Cathay is growing in its third largest long-haul market of Australia through seat density and up-gauging. 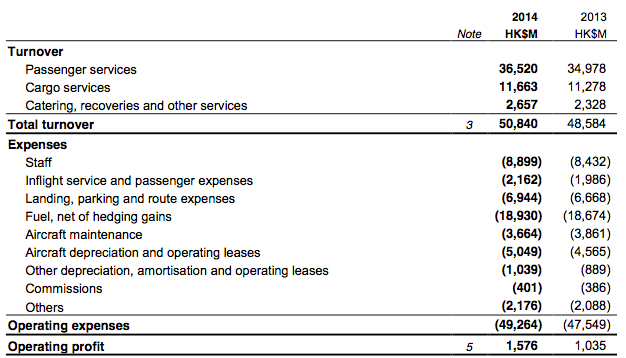 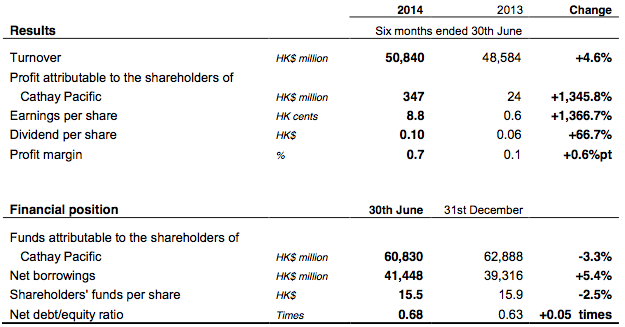 The airlines account for 79% of the group's profit before taxation, with the 1H2014 pre-tax profit for Cathay and Dragonair being HKD547 million (USD71 million). The second half is traditionally stronger and Cathay is satisfied – not greatly – with how 2H2014 is looking.

Cathay joins Asian peers in trading yield for load factor. Only Europe is up across the metrics

North America was the only market to experience a decrease in load factor (0.6ppt), but loads there are already at significant highs – 88.7%. North America recorded a 17.1% increase in ASKs. The only market where Cathay decreased capacity was Southeast Asia, which has been impacted by LCC competition but more recently by the waning interest of Chinese tourists. Cathay says it has restored its capacity to Bangkok and is seeing a gradual return of passengers.

There are limits to how much can be gained in load factors, and as noted North America recorded a 0.6ppt drop from 89.3% to 88.7%. Cathay has used tiny volume Fanfares to boost load factor (and appear to give Hong Kong a low fare alternative to LCCs), but CEO Ivan Chu said, "We don't expect to do more" with Fanfares aside from an upcoming one-off promotion due to a Skytrax award. 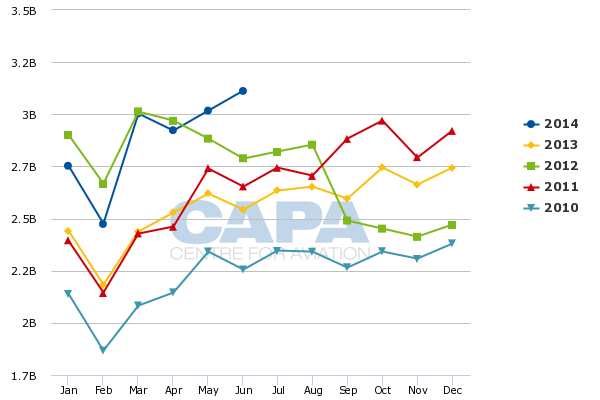 The trans-Pacific market continues to experience increased competition, which has resulted in Cathay's North American yields declining 4.4% (the exact yield amount is not disclosed). This followed strong yield growth in 1H2013 due to the introduction of premium economy, creating stronger class mixture. 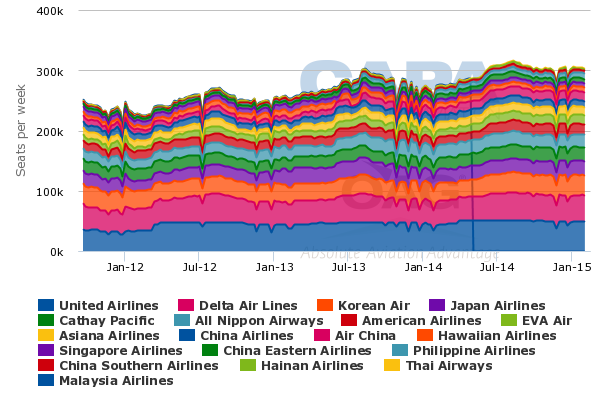 For first time, Cathay carries as much freight in bellies as on dedicated freighters

Cargo continues to be in a sour state with Cathay's 10.8% increase in ATKs and 0.8ppt gain in load factor offset by a 6.9% decrease in yield. The issue for air cargo continues to be over-capacity, as Cathay pointed out without a hint of irony of its own contribution to this with double-digit growth. However, the way Cathay carries cargo is changing. Growing passenger flights using aircraft with more bellyspace available reduces the need for dedicated freighters.

In 1H2014 for the first time, Cathay carried as much freight on passenger aircraft as on dedicated freighters. Dedicated freighters retain a role to high volume destinations (Zhengzhou) that larger passenger planes do not reach, as well as to North America, where bellyspace on some flights can be slim to none. But elsewhere there are opportunities for consolidation, for instance by removing the dedicated freighter service to Manchester, which sees passenger service commence at the end of 2014.

Cargo yields will likely continue to decline due to Hong Kong seeing more trans-shipment of cargo than being the point of origin. Cathay used to lift significant volumes of cargo that originated in the Pearl River Delta, but now those manufacturing areas are moving more inland in China (and to other countries), requiring flights to fetch the cargo and then carry the goods onwards. As in the passenger business, connecting cargo markets are more competitive than point-to-point (although cargo was already less sensitive to how direct travel may be).

Cathay does not break out the financial results for other companies in its group, but said losses at Cathay Pacific Services Limited, which manages Cathay's new cargo terminal in Hong Kong, reduced as the facility became fully operational in Oct-2013. The facility has helped reduce Cathay's cargo transit time from eight to five hours. Cathay is optimistic about new technology products leading to a cargo growth spurt, but in past years the end of year cargo peak was short. Overall cargo throughput from all airlines at Hong Kong is at an all time high, having so far surpassed the most recent peaks, which occurred in 2010. 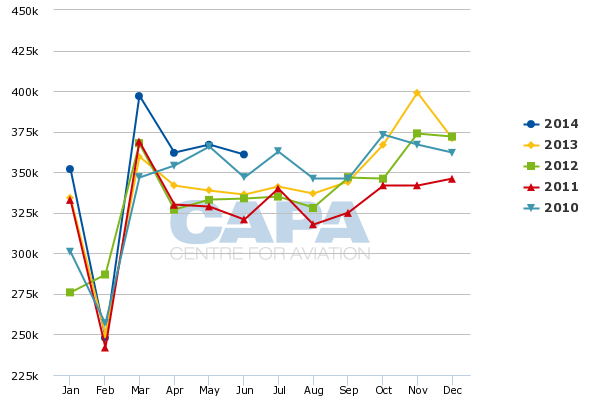 Seeking productivity gains in absence of opportunities to trim costs

The airline operating expenses grew 4.7%, slightly under the 5.3% increase in capacity, but this was largely due to a reduced fuel bill. Other costs (including staff costs) remain a concern. Aircraft depreciation increased due to the accelerated retirement of the A340-300s.

A340s to be retired by the end of 2017. A330s get capacity boost with premium economy changes

Cathay is once again accelerating retirement of older aircraft, having first accelerated 747 retirement in 2012. Cathay in 1H2014 decided to advance A340-300 retirement, with four aircraft to leave the fleet by the end of 2015 and the remaining seven by the end of 2017. The aircraft are increasingly being pulled off long-haul routes and replaced with 777-300ERs. 777 deliveries continue in 2H2014 and 2015. From 2016 (when Cathay's A350 deliveries commence), A350s can also replace A340s. 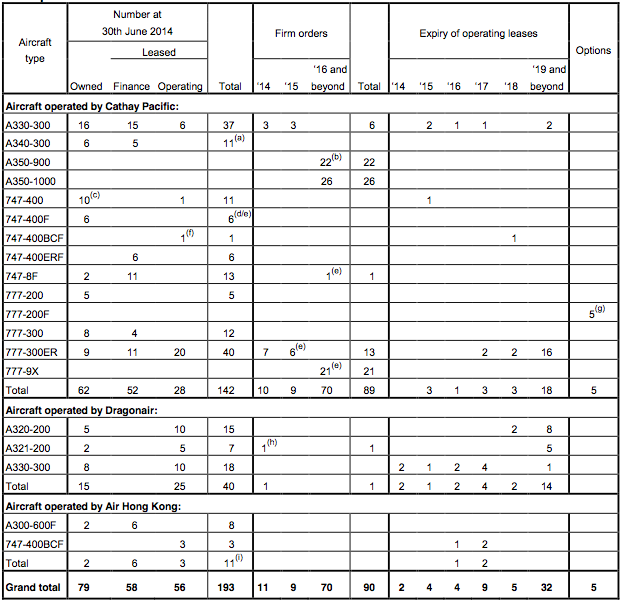 Source: Cathay Pacific
*Includes parked aircraft. The table does not reflect aircraft movements after 30th June 2014.
(a)  Cathay Pacific planned the accelerated retirement of 11 Airbus A340-300 aircraft. Four of these aircraft will be retired by the end of 2015 and the remaining seven will be retired by the end of 2017.
(b)  Including two aircraft on 12-year operating leases.
(c)  Two aircraft were retired in August 2014.
(d)  Four aircraft were parked, one in May 2013, two in January 2014 and one in February 2014.
(e)  In December 2013, Cathay Pacific agreed with The Boeing Company to purchase 21 new Boeing 777-9X aircraft (for delivery after 2020), three new Boeing 777-300ER aircraft and one new Boeing 747-8F freighter and to sell six existing Boeing 747-400F freighters.
(f)  Aircraft was parked in August 2013.
(g)  Purchase options in respect of five Boeing 777-200F freighters.
(h)  Aircraft on an 8-year operating lease.
(i)  Air Hong Kong operates a total of 13 aircraft. It has two Airbus A300-600F freighters on wet leases, with lease terms ending in 2015. In May, Air Hong Kong early terminated one of the wet leases, which will be changed to a dry lease with effect from October 2014.

Riding the next few years – and still without a LCC

Cathay re-iterated a familiar line that "we have no intention of setting-up a low-cost carrier", and at this time can probably get away without one: it has successfully stalled Jetstar Hong Kong's entry and has maximised its landing slots  at Hong Kong, allowing it to grow through slot conversion when necessary (for example, there are narrowbody Hong Kong-Shanghai Pudong flights at close timings that could be combined into a single widebody service). Short-haul continues to be a problem and Cathay could have followed peers on other continents moving short-haul services to a low-cost platform (boosting profits), but Cathay remains adamant on having a full-service position across the network.

Cathay may not operate low-cost but it still does not want a new entrant to do it. (Cathay was unable to stop HK Express, which already had a licence.) Mr Slosar still believes Jetstar should be denied a Hong Kong licence as "by their own admission all the [Jetstar Group] airlines are Australian based", he said without specifying exact evidence. But then he repeated another obscure statement that Jetstar Hong Kong wanted "free use" of Hong Kong rights "without giving up" unspecified access, possibly in reference to the constrained Australia-Hong Kong bilateral. Cathay seems to be taking the view the status quo will prevail, as it is adding seats on the A330s serving Australia and deploying, in limited numbers initially, larger aircraft to Australia.

As the LCC worry seems to fade, what emerges is the larger question of the North Asian landscape in a few years where once-sleepy airlines are accelerating growth. One saving grace is that unlike at Malaysia Airlines, Singapore Airlines or Thai Airways, Gulf carriers are less present in Hong Kong and its backyard than in Southeast Asia.