Airlines have responded differently to the way that the pandemic has affected the demand for goods, to the changing nature of those goods, and the way that they are supplied. Several of them have risen to the challenge to a greater degree than others.

One of them is Qatar Airways, which was already the second largest cargo carrier by FTKs (2019). By being one of the first movers in converting passenger aircraft for full freighter operations and seeking out new markets, Qatar Airways has risen to be the leading airline in the world for cargo payload, with almost 10% of the total volume.

The following short report includes extracts from an interview with the company’s GCEO on CAPA Live and data from CAPA’s profiles on the airline.

One of the more stark examples of the way the air transport world has been turned upside down during the past year comes by way of the current ranking of airlines by their cargo volume, as in the table below.

Usually it could be expected that those airlines that are located in, or mainly operate in, the world’s leading manufacturing regions – such as North Asia – would head the table, and particularly those that are either dedicated cargo airlines per se or have dedicated cargo divisions.

And they are certainly there from that region, for example Korean Air (3rd) and Cathay Pacific (4th), while the central manufacturing belt of Europe is represented by airlines such as Luxembourg-based Cargolux (6th) and Lufthansa (9th).

What is surprising, though, is the emergence of airlines such as Ethiopian (7th) and Saudia (18th). Their elevation is almost certain to be attributed to their response to the pandemic.

Possibly the most surprising statistic here is that Qatar Airways heads the list, with almost 10% of global cargo payload and a full 3.3 percentage points ahead of its nearest ‘rival’, the Dubai-based Emirates Airline.

It is not as if Qatar Airways was a small player previously.

In 2019 it was the world’s second biggest cargo airline behind the parcels specialist carrier FedEx, and in fact the two leading non-parcel specialists in that year were also Qatar Airways and Emirates, as the table below shows.

Top 25 cargo airlines in 2019, as measured by FTKs (Freight-Ton-Kilometres)

In a recent (13-Jan-2021) interview for ‘CAPA Live’, Qatar Airways’ GCEO Akbar Al Baker spoke, as bullishly as always, about the airline’s emergence as a global leader.

He said that as well as being the #1 cargo airline in the world, and the #3 passenger airline by RPKs, Qatar Airways was also the “largest operator connecting people” currently, with 129 destinations by Mar-2021.

Cooperation between the airline and the Doha Hamad airport (which are the same company) helped make the most appropriate sanitary conditions easier to provide. (That airports and airlines should be under common ownership has previously been frowned on for competition reasons, but the pandemic has cast the value of such arrangements in totally a different light).

Mr Al Baker went on to say that the entity thus found it easier and quicker to introduce appropriate technology early on at the airport, such as contactless procedures for passengers, robots, mandatory masks, gloves, and sanitisers to every passenger. As a result, the airport was awarded a 5 Star Skytrax rating for its COVID-mitigating efforts. (In the most recent Skytrax overall awards in 2019 Qatar Airways was awarded the title of ‘World’s Best Airline’).

Partnerships become much more important in a COVID world; Qatar Airways has been active

Mr Al Baker said that one ‘benefit’ of the pandemic is that partnerships with other airlines have been improved, including where there was previously discord. Most notably, that previous discord has been replaced by cooperation with American Airlines and with Air Canada, each formerly strong opponents of the "subsidised" Gulf carriers.

Today, subsidy has taken on a whole different significance, as almost all major airlines have directly or indirectly survived the pandemic largely due to financial support from their governments.

In addition, Qatar has also concluded a partnership with neighbouring Emirates codeshare partner JetBlue, and has a forthcoming arrangement with Alaska Airlines. These partnerships extend to freight as well as passenger agreements.

All of Qatar's previous routes flown will restart

In order to maintain its new-found status, Qatar Airways intends to reserve all the routes it had introduced before the pandemic, i.e. every route it was operating will be reintroduced at some stage.

Qatar Airways “wants to be a dominant player in the cargo business,” he said, adding “airlines learned from us how to convert passenger aircraft into freighters”.  (Currently – week commencing 11-Jan-2021 – 61% of the airline's cargo capacity is on dedicated freighters and 39% on passenger aircraft, where seats have been removed). But Mr al Baker

Approximately 87% of Qatar Airways’ current fleet is widebody, the remainder being narrowbody.

That fleet is shown in detail here. 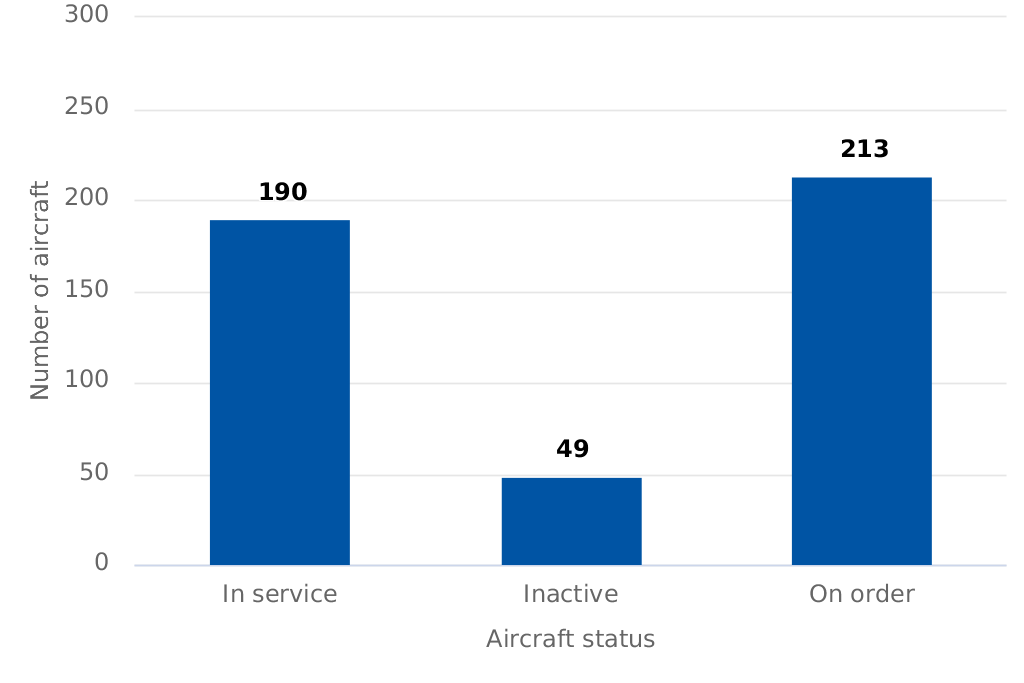 Projected delivery dates are as follows:

Qatar Airways: projected delivery dates for aircraft on order purchased from OEMs and leased from lessors, new aircraft order pipelines as at 11-Jan-2021 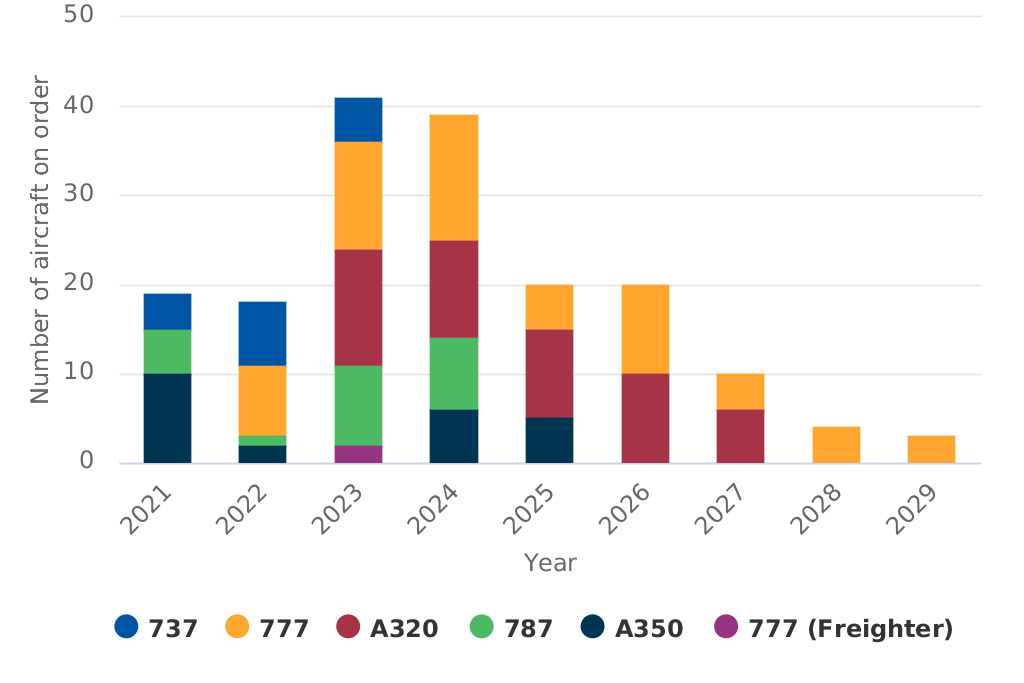 It can be seen in the live chart that the additional freighters that Mr Al Baker referred to are number two at present (purple bar, 2023).

CAPA also has a new feature by which live locations of all an airline's aircraft can be ascertained on one screen. Below is a screenshot taken at 14:15 GMT on 14-Jan-2021 for Qatar Airways.

Consistent cargo capacity growth in the past five years

The impact of the pandemic on capacity is portrayed in this chart, which shows airline system cargo capacity, and YoY growth, by year. 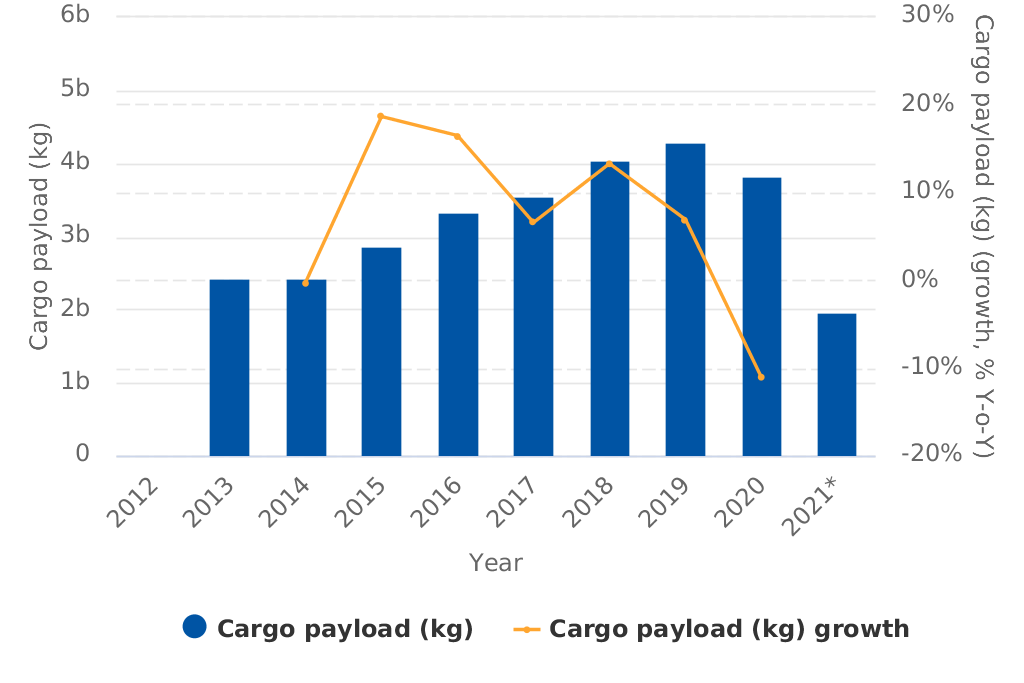 Finally, this chart shows the way that the airline adapted to weekly cargo demand throughout 2020, which began very well.

Following a fairly dramatic fall-off of capacity through to May-2020, a recovery began, the airline ending the year with 67 million kilos of capacity available, compared to an annual high of 95.7 million in mid Jan-2020 (red line).

The dotted green line is a predicted value through to Jun-2021 which, if achieved, would return the airline to early 2019 levels, but that value is likely to be subject to change. 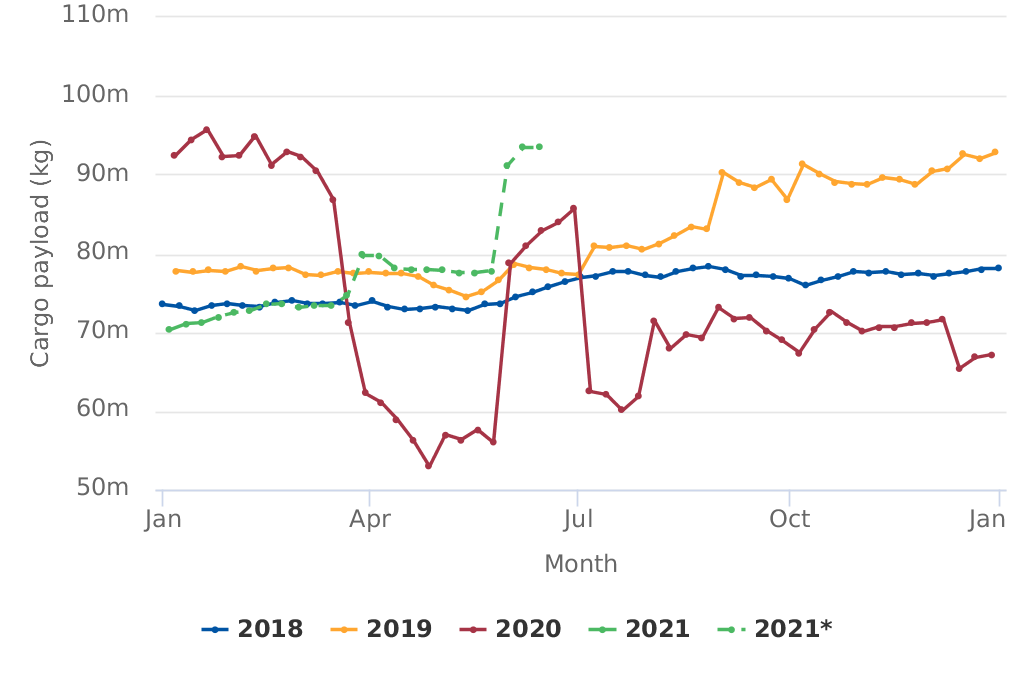