SAS dropped 3.6%, after a report in Danish Business Daily, Børsen, claimed the airline has already spent the majority of the USD850 million it raised from its rights issue, raising concerns that further capital injections may be required.

Finnair’s shares gained 4.5%, as the carrier stated it now has its lost-luggage situation under control, with the last of the bags stranded at Helsinki-Vantaa Airport to be delivered by the end of the week. Approximately 20,000 passengers were affected by the delays, which Finnair attributed to poor weather conditions. (However, baggage-handling union representatives are blaming staff shortages, due to cost cutting, for the challenges).

Also in Europe, shares in British Airways were down slightly (-0.9%), with Lufthansa and Air France also weaker, down 1.0% and 1.7%, respectively. 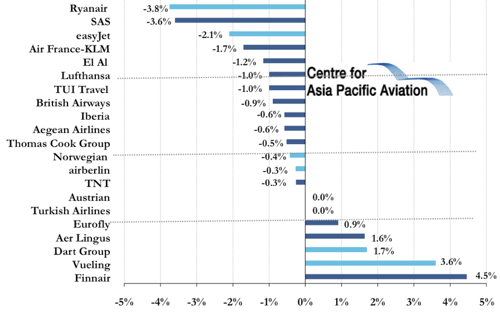