One of the key competitive dynamics in the aviation industry is the relative cost efficiency of different airlines, as measured by cost per available seat kilometre (CASK). CAPA's new CASK Database plots CASK against average trip length, giving its members an important graphical tool for comparing competing airlines and highlighting broad differences between them.

A direct comparison of CASK, or unit cost, for different airlines is not straightforward as it varies with the average distance flown. In general, the cost of producing a seat kilometre falls as average trip length increases since fixed costs are amortised over more seat kilometres and variable costs, such as fuel, are more efficiently consumed in longer flights. Plotting CASK versus average trip length allows the relative cost efficiency of different airlines to be compared visually.

These include the large majority of the world's biggest airlines. The Report reveals much about their relative competitive positioning. For example, it highlights the airlines with the highest and lowest unit costs and the wide gap between them. It shows which region's full service carriers (FSCs) have the highest unit costs and how the regions of the world have very different distributions of average trip length.

The CAPA CASK Database and its charts also reconfirm that low cost carriers (LCCs) really do have lower unit costs, for a given average trip length, than FSCs. For all the talk of "hybridisation" and the convergence of business models, there is little convergence on unit cost for most of the world's airlines, although our database shows where the gap is narrowest. Moreover, although a growing number of airlines are trying out long haul low cost, this business model still has only one pure play practitioner.

The following chart, which CAPA Members can view interactively on our website, plots CASK in USc (vertical axis) against average trip length in km (horizontal axis) for many of the leading airlines in the world.

It is not a comprehensive sample, but includes most of the airlines for whom financial and traffic data are readily available for 2014 (or the nearest financial year, where this does not coincide with the calendar year).

CAPA members who choose to subscribe to the CASK Database Add-on can also download the underlying dataset in addition to the graphic.

Airlines with significant activities beyond the carriage of passengers and that do not generate ASKs will suffer some distortion when their CASK is compared with those for whom the passenger business is dominant. Nevertheless, CASK is a well accepted and simple way to compare unit costs. 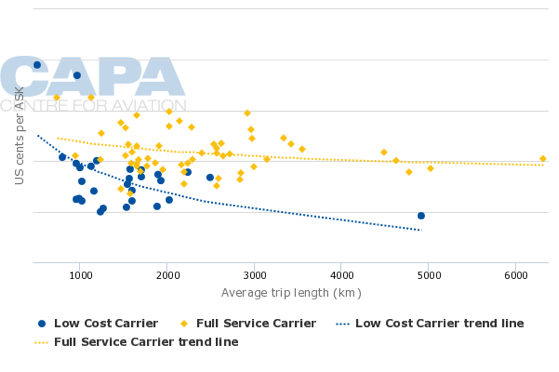 Some extracts from the report:

"ASIA PACIFIC AND MIDDLE EAST - HIGHLY EFFICIENT AIRLINES
The Asia Pacific & Middle East region includes the world's lowest cost LCCs and some of its most cost efficient FSCs, but also some very high cost FSCs. The concept of low-cost long haul only really exists in the form of AirAsia X. Apart from this carrier, Asia’s LCCs do not have longer average sector lengths than in other regions Perhaps not surprising, but nevertheless revealing, is the clear CASK divide between FSCs from the region's more developed/industrialised nations and those from its emerging economies. Japan, Korea, Australia, New Zealand, Taiwan and Hong Kong are all home to Asia Pacific's higher unit cost airlines. Japan is a particularly high cost market for airlines to operate and is home to the two highest cost FSCs in Asia Pacific.

"AMERICAS: LCCs DON’T ENJOY THE SAME ADVANTAGE
In the Americas, particularly in the US, the unit cost gap between low cost carriers and full service carriers is narrower than in any other major world region, as measured by cost per available seat kilometre. This reflects two main factors. First, the major US FSCs have all been through a process of cost reduction, including time in Chapter 11 bankruptcy protection which helped them to restructure labour costs in particular. They were the first to face LCC competition and the first to respond to it.

"EUROPE: THE EFFICIENCY ‘HAVES’ AND ‘HAVE-NOTS’
In Europe, there is also a clear divide between FSCs and LCCs, although there are some cost-efficient FSCs that are close to LCC territory in our chart (see below). The higher cost FSCs, those that sit well above the FSC trend line in the chart below, are mainly those that are part of the bigger European legacy airline groups. As a group, European FSCs are longer haul than their American counterparts, but less so than those from the Asia Pacific & Middle East region."

The remainder of this report provides analysis of airline unit costs vs trip length in Asia, the Middle East, Europe and North America, utilising the CAPA CASK Database.

Click here to download the full report and learn more about this exciting new analysis tool from CAPA.