May-2009 was a very difficult month for member carriers of the Association of European Airlines. While they have managed to cut capacity at unprecedented rates, and increase load factors compared to 2008, passenger traffic is still dropping, and the rate of decline shows little indication of softening.

For the week ended 31-May-2009 (Week 22), total scheduled traffic (RPKs) for AEA members was down 7.1% year-on-year - an improvement over the rest of the month, but still a worryingly sharp decline. For the previous three weeks, RPKs had dropped by 9-10%. 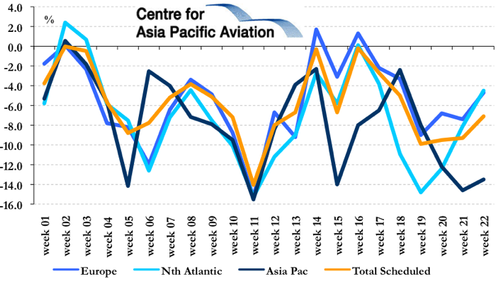 Europe's full service carriers have continued to strip capacity by approximately 5% through May-09, with ASKs for Week 22 declining 5.4% year-on-year. 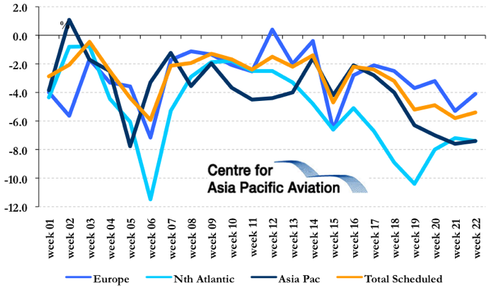 Capacity on Asia Pacific routes and across the North Atlantic was down 7.4%, after AEA members had severely reduced capacity in the North Atlantic over the earlier parts of the month. European capacity cuts were again somewhat smaller, down 4.1%, reflecting the slightly better demand situation in the region. 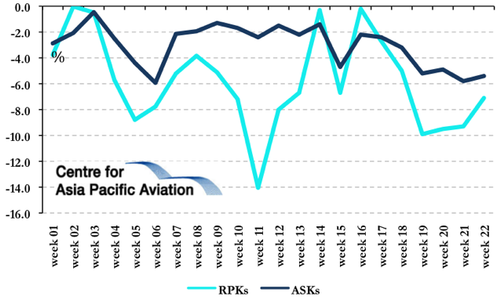 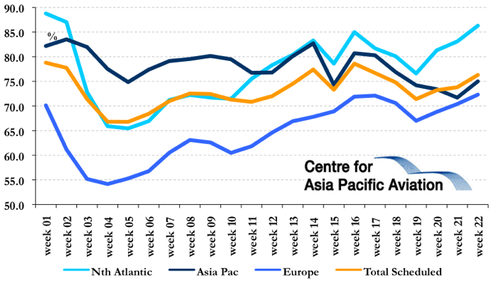 North Atlantic load factors are now firmly the strongest, hitting 86.3% in the final week of May. Asia Pacific load factors picked up to 75.0%, after six weeks of decline (the longest consecutive load factor decline recorded for the year to date, for any region).

Load factors for cross-border European traffic showed more improvement, up to 72.3%, although the region still lags the long-haul sectors. However, this is the highest passenger load factor reported for European traffic for the year to date.

But further improvement in load factors is needed.

Poor May, but can we expect anything better ahead for Europe's airlines?

British Airways CEO, Willie Walsh, commented that the market is unresponsive to demand stimulus, particularly the premium segment (where prices have plummeted up to 40%), and he saw no hope of a quick recovery.

This is a major concern, as European airlines have already cut yields to the quick to fill up their aircraft in the hope of regaining control over pricing. Excess capacity is prevalent in many markets and a broad based economic recovery remains distant.

To top it all off, the spectre of higher fuel prices continues to loom, with oil prices closing above USD70 per barrel on 09-Jun-09, after climbing 15% the previous week.

IATA Director General & CEO, Giovanni Bisignani, addressed worldwide airline CEO's at IATA's AGM in Kuala Lumpur with a strong message: the ground has shifted for airlines and losses are going to continue. No recovery is yet in sight and there is no modern precedent to forecast when it could begin. Any prediction of a "V shaped" recovery is unsupported by the facts. The estimate for European airline net losses has risen from USD1 billion (predicted in March) to USD1.8 billion.