Capacity did not decline much for US airline industry in recession

The shift of US domestic capacity to low-cost carriers (LCC) has been happening for years, but new analysis reveals that despite all the talk about capacity discipline and dramatic capacity cuts, in reality only about a billion available seat miles disappeared in the latest recession, translating to a big gain in share for the LCCs.

Herbst does mention that regionals have made some gains from the outsourcing, but he did not give a figure. If that is so, then less than a billion ASMs have come out. That is a disheartening statistic at a time when legacy carriers have made such painful moves to regain their equilibrium.

“The challenge for the old legacy airlines is to find a way to be cost competitive with these growing domestic carriers that have never incurred some of the legacy expenses,” wrote Herbst. “This objective needs to be accomplished before so much market share is lost that there is no way for them to recover.”

But that is really the question – should market share be saved? The legacies have clearly said no.

Traditionally, legacies would do almost anything to maintain market share, and lost their shirts in the process – some USD60 billion since 9/11. In searching for a new business model – one in which they actually make money – they seem to have decided that market share at all costs is not worth it. See related report: US airline outlook: Fundamental restructuring is in the wind but will the industry revert to type?

What is even more disheartening is the fact that all the cost gains made through multiple  bankruptcies in the past decade has been competed away so unless there are new bankruptcies, which some analysts expect, achieving new cost gains, especially from labor which has already sacrificed so much will be all but impossible. Unions are already talking strike. 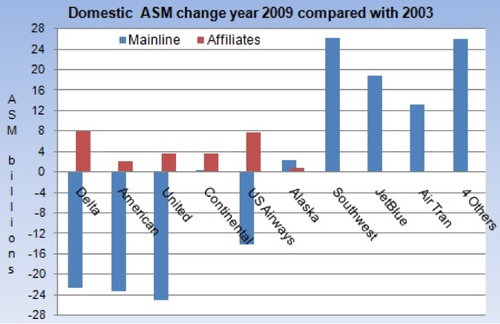 For the year 2009, American is the only airline to have reported an operating loss. Data clearly shows a correlation between lower unit costs and increasing capacity. 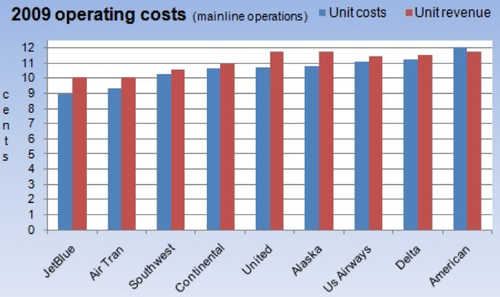