"We're heading for a very cold winter", KLM CEO Pieter Elbers told CAPA Live on 11-Nov-2020, but added that, "with the vaccine and some of the measures, we're optimistic".

KLM has received a state aid package totalling EUR3.4 billion, of which EUR2.4 billion was a bank loan 90% guaranteed by the Dutch state and EUR1 billion was a direct loan from the government. State approval of the aid required union agreement to a 15% staff cost reduction, and KLM is cutting its workforce by 5,000 by the end of 2020.

This ensures KLM's survival through the most challenging phase of the COVID-19 crisis and gives it the opportunity to benefit from improved demand, particularly long haul, when it comes. It is operating more of its fleet and network than most European legacy airlines – a necessity for a hub carrier with almost no domestic market.

For now, Mr Elbers remains cautious, telling CAPA Live: "My internal focus is we have crisis management for the last six to nine months. We're now in the phase of recovery. It's not going to be linear recovery, it's going to be a bumpy recovery".

"When borders were opening up again and societies were opening up again, in the summer months, July and August, it wasn't too bad", says Mr Elbers, but "from September onwards, with new lockdowns new cases and the lack of Intercontinental recovery, we have seen basically a return in Europe to much lower levels".

…a higher level than Air France and the European market 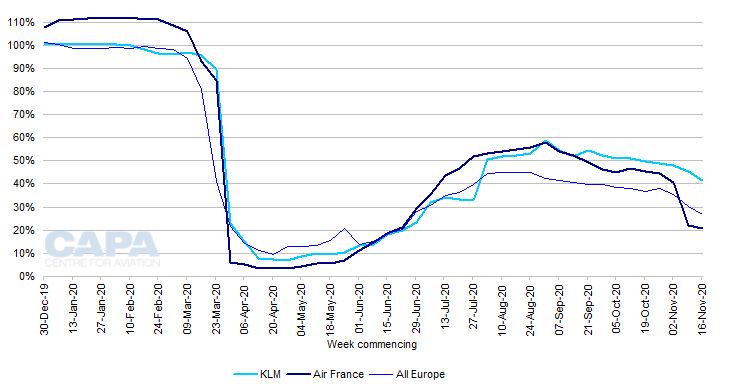 In 3Q2020 overall, KLM operated just under 49% of its prior year ASKs, with a similar percentage on both long haul and short/medium haul.

A subsequent statement from KLM on 11-Nov-2020 said that its European network would serve 90-95% of its pre-crisis destinations, with capacity at 40%, in "the coming months".

The long haul network will operate 50-60% of its pre-crisis passenger flights, or 65% including cargo-only services.

Relatively strong performance in cargo, in KLM's passenger and combi aircraft, and in its cargo subsidiary Martinair's freighter fleet, has been "a sort of silver lining in a very big cloud we're facing with this COVID".

KLM has 92% of its aircraft in service to maintain network integrity; towards an all-Boeing fleet?

According to the CAPA Fleet Database, KLM has 151 aircraft in service out of a total of 165, or 92% (this includes 49 Embraer regional jets operated by KLM Cityhopper and four 747 freighters operated by Martinair, all in service).

Mr Elbers attributes the high proportion of KLM Group's fleet in service to the desire to maintain a large part of its network, albeit at lower frequencies and capacity. The aim is to offer customers as many destinations as possible.

Although in the week of 16-Nov-20 capacity is only 41% of levels a year ago, KLM is maintaining the majority of its network destinations. According to OAG, it is serving 124 airports, which is 78% of the 158 served in the same week of last year.

This means deploying its regional fleet in full in order to reach most of its European network.

In maintaining as much as possible of the integrity of its long haul network, importantly supported by cargo demand, KLM is also keeping the majority of its widebody aircraft in service (including all its freighters).

Mr Elbers says that the long haul fleet is "mostly" on the way to becoming all Boeing, while this is "not decided" for the medium haul fleet.

The KLM Group order book for aircraft mainly consists of 21 Embraer ERJ195-E2 regional jets for Cityhopper. The mainline has just one 787-10 on order.

"And we're committed to that", says Mr Elbers, "so we will come to new fleet, we will continue our programs for sustainable aviation fuel."

The combination of Air France and KLM was always largely driven by coordinating the hubs to feed their long haul networks, but Mr Elbers' faith in the hub system has not been shaken by the pandemic.

The pandemic prompted the almost total collapse of long haul traffic and the business travel segment, which has always been a vital source of profit to long haul routes. Long haul and business travel are expected to take longer to recover than short haul and leisure travel.

Because of this Mr Elbers expects smaller long haul flows – whether point-to-point, or between a hub and a smaller spoke destination – to be under particular pressure in the recovery.

"So I do firmly believe that recovery of long haul business traffic will be led by traffic through the hubs rather than point-to-point or hub to spoke", he concludes.

He is confident that the expanded North Atlantic joint venture between KLM, Air France, Delta and Virgin Atlantic will have "pole position to take benefits" from their hubs and partnership as the "number one option" for trans Atlantic customers.

Mr Elbers adds that "some of the alternatives they may have had before COVID won't be there". He believes hubs and the JV will be "even stronger post COVID than before COVID".

Cost cuts are a renewed focus

In the recovery, particularly with business traffic slower to return, there is likely to be downward pressure on yields for some time. This means that all airlines will "have a serious cost issue going forward".

"And we know that with the slower return of business travel, we have to address our cost", says Mr Elbers, adding that state support from the Netherlands was conditional on cost savings.

"And that's precisely why the Dutch government as one of the conditions for this loan has put, not only your staff contribution [in pay cuts] up to 20%, but also a 15% cost reduction as one of the targets to be met."

This means that it has always operated at lower average yields and, consequently, lower unit costs than many legacy airlines operating out of Europe.

KLM has always had a lower unit cost than its sister airline Air France. In theory, at least, this should position it to take a more active part in the recovery of long haul traffic if yields remain weak.

"I believe that modern fleet, relatively small business class, lower costs should help us to be in a good position moving forward", says Mr Elbers.

Although the onset of the pandemic led to a pause in investment by airlines, Mr Elbers says that KLM is now planning and preparing for the future and considering what investments will be needed.

"What should be the size of our fleet? What should be our customer proposition? How to get the hygiene higher on the agenda, or even [to become] more customer centric with digital innovation to help to communicate. And the same, of course, applies for distribution."

In terms of technology and innovation, Mr Elbers believes that financial pressures will push KLM even more towards partnerships with "technology firms with more resources, more knowledge, more capabilities".

Technology partners not only increase KLM's access to investment funds, but also allow it to keep pace with innovation while sticking "to what you're good at, and that's running an airline".

"As an airline, we would not be building our own aircraft", he says, "so why should we build all our technology ourselves?"

Mr Elbers rejects the idea that airlines have not been good at selling tickets. He points to successive improvements in KLM's annual load factor pre-COVID (reaching 89.4% in 2019), and even higher levels for European low cost airlines.

He argues that the airline industry's historically weak returns on invested capital are not the result of any weakness in selling skills.

Rather, he suggests that this has more to do with the "relative position and the relative cost of airlines in [the aviation] value chain" and "the fact that many of the other actors in that entire value chain have [a] different level of consolidation".

He acknowledges that the pandemic is likely to lead to increased consolidation among European airlines: "the lack of a return of traffic or a slower return of traffic will of course bring more airlines into a difficult situation".

Mr Elbers thinks that the current uncertainties around travel restrictions and demand "still requires so much hands-on attention that probably this consolidation itself will move a little bit further forward".

2021: less capacity and "some form" of recovery

Mr Elbers welcomes the news on a COVID-19 vaccine as "a very important step and widely recognised as a crucial element in recovery of the traffic show".

He is looking to 2021 with a cautiously positive outlook. Next year will feature structurally less capacity than before the crisis.

This was why KLM's EUR3.4 billion state aid loan was "so important for us", he says, because "that will help us to navigate to this sort of recovery phase of the industry".

And Mr Elbers does expect some form of recovery in 2021, "both on the European side, as well as intercontinental side".