At the CAPA Live Jan-2021 conference, Brazilian LCC Azul's chief revenue officer Abhi Shah talked to CAPA about the outlook for the airline. The airline's domestic capacity is only down 4% y-o-y.

Brazil’s Azul has used what it deems to be its inherent unique advantages – a flexible fleet and unassailable network – to navigate the COVID-19 pandemic.

But the company has also embraced outside-the-box thinking in order to ensure it remains competitive once a full recovery is under way.

Azul will continue to use all of those elements as it works its way out of the COVID-19 crisis, and the airline remains confident in its longer term view that Brazil’s growth potential remains firmly intact.

Azul has been bullish about the recovery in Brazil for the past few months.

At the recent CAPA Live January conference, Azul chief revenue officer Abhi Shah remarked that in Apr-2020 the airline had projected that approximately 40% of its network would be restored by YE2020, but in fact the company’s domestic traffic in Dec-2020 had shown a recovery of approximately 90%.

Data from CAPA and OAG show that for the week of 18-Jan-2021 Azul’s domestic ASKs are down just 4%. It is currently the summer high season in the Southern Hemisphere.

Overall, Brazil’s domestic ASKs for that period have been cut by approximately 24% year-on-year. 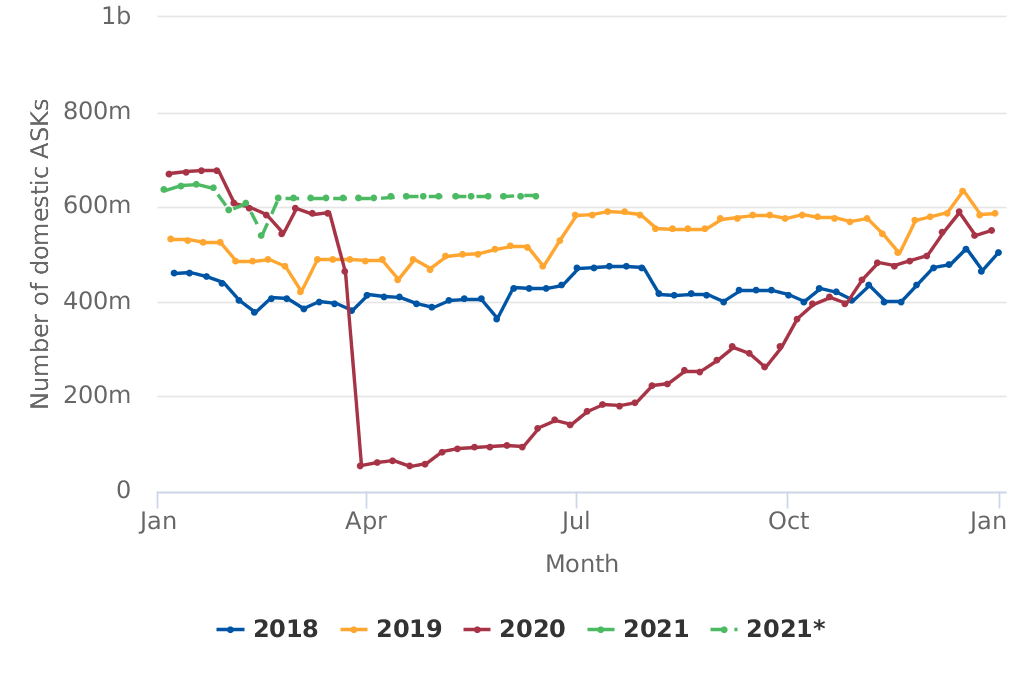 * These values are at least partly predictive up to 6 months from 18-Jan-2021 and may be subject to change.

Mr Shah reiterated that Azul’s competitive strengths had served the airline well during the pandemic.

One advantage the airline has cited is its fleet flexibility. Its fleet ranges from nine Cessna Caravans to 271-seat Airbus A330s.

That flexibility has allowed Azul to optimise aircraft deployment as markets come back online. It can initially place a Cessna or ATR turboprop on a route, and in some cases enough demand can materialise to upgauge to Airbus narrowbodies.

The Cessna aircraft are a more recent addition to Azul’s fleet portfolio. In early 2020 Azul completed the acquisition of the regional operator TwoFlex, which had a fleet of 17 nine-seat Cessna Caravans. Azul used those aircraft to launch a regional arm, 'Azul Conecta'.

Another aspect of its business that Azul believes is advantageous is that a significant portion of its network has no competition. In Dec-2020 Azul calculated that it was serving 113 destinations, and was the only airline operating in 76% of those markets.

Given that small amount of competitive overlap in Azul’s network, Mr Shah remarked that the airline does not have to be concerned about competitors matching fares or adding flights.

He also said that in many instances the airline adds a new city with a population of 400,000 to a half million that previously has not had air services. Those small markets feed the airline’s hubs, and Mr Shah believes the air service can transform the economies of those cities.

Of course, said Mr Shah, “Brazil lost time” in 2020, but the country remains a growing market. In late 2020 Azul calculated that Brazil’s trips per capita in 2019 was 0.5, compared with 0.8 each for Colombia and Mexico.

Azul has also been building up its cargo business during the past few years, and similarly to other airlines, that has helped to blunt some of the decimation in passenger demand for the Brazilian operator. Near the end of 2020, Azul calculated that its cargo revenue would grow by 28% year-on-year in 2020, whereas passenger revenue was projected to fall by 42%.

During CAPA Live Mr Shah stated that Brazil is a huge country where logistics can be difficult, but there is a cultural shift towards e-commerce under way, in which consumers “want their tennis shoes to show up the next day.”

Near the end of 2020 Mr Shah told investors that the E-Jets could help Azul drive down its delivery times.

“I think that with the Embraers, we can have same-day products”, he stated. The jets could help Azul develop “very strong next-day products to cities that did not have that type of logistics before, cities where you take 7-10 days to go by truck”.

The airline also placed some Airbus A330s in its domestic network, and Azul had come to the conclusion that that had been positive for its cargo business.

Azul’s diverse fleet, comprehensive network and cargo business were well established before the COVID-19 pandemic. But its new codeshare partnership with LATAM Airlines was born from the crisis.

Mr Shah commented that “exceptional circumstances make you think differently”, and to LATAM’s credit, it was open to the idea of codesharing.

At the end of 2020 the codeshare between the two airlines covered 151 nonstop domestic routes, and Mr Shah stated that it was a way for Azul and LATAM to bring their networks back online as quickly as possible, as well as reducing uncertainty.

Azul has faced the same challenges as all airlines during the COVID-19 pandemic – a rush to build liquidity and quickly altering its business to adapt to a rapid change in the fundamental dynamics of the airline business.

But Azul has appeared to have a certain level of optimism about the recovery that is based on the competitive advantages it had in place before the crisis.

And the airline believes that those fundamentals, along with some unconventional tools, will help it remain strong well after the crisis is over.