Will an aviation industry recovery be ‘V’, ‘U’, ‘W’ or ‘L’-shaped after the coronavirus is tamed?

For aviation, it is by now clear that “normal” is past history. CAPA’s COVID-19 Masterclass on 8-Apr-2020 began an exploration of what the journey to the new ‘normal’ will look like for the aviation industry.

After weeks of route cancellations amid increasing restrictions on mobility, the global aviation system, the lifeblood of intercontinental connectivity, has been reduced to a mere skeletal framework. Even that frame is becoming increasingly weak as the coronavirus pandemic continues to spread.

Airlines have moved quickly to make the necessary cuts to try and minimise their own exposure to what has become a global economic crisis. But now, as they come to terms with the current situation, attention must necessarily turn to the way out.

One hope is that China’s recovery trajectory could point the way for other countries.

Full details about MasterClass #2, "Towards a post-COVID-19 global aviation regulatory regime" on 22-Apr-2020 will be available shortly - click here for more information.

The full session of CAPA's COVID-19 MasterClass #1 can be viewed here.

Airline liquidity is now “melting like snow in the Sahara”

Mr Mueller prefaced his remarks by saying what a painfully sad time it was for airlines that had worked hard over several years to deliver liquidity - which is now “melting like snow in the Sahara”.

The virus originated in China in late-2019. As that country ends its domestic lockdown, other nations across the world have yet to hit the bottom. The journey down has been fast; the climb back up appears more challenging. In the short-term it will not follow a path back to the levels when this frightening situation began. And even in the long term, aviation and travel must change irrevocably.

It's becoming apparent that the virus that has caused the biggest impact on human life in modern times has no guarantee it will ever fully depart. There will be adaptations – by humanity, but almost inevitably, also by COVID-19, whose potential siblings must now be factored into the future of the travel industry.

The first steps towards recovery

The necessary first step to recovery is achieving a degree of stability, which may be the best hope for the short-term. It will be a bumpy ride as capacity is tweaked along this uncharted path when demand recovers and fluctuates.

Initially there was an expectation that recovery would be ‘V’-shaped, as occurred following SARS in 2003/04. The worst scenario was expected to be ‘U’-shaped like previous milestone events in the aviation industry; it could be a ‘W’ with a second dip. But increasingly it is looking as if it could take the shape of a prolonged ‘L’.

The green shoots that are appearing in China are a big positive, if they can be maintained. Understandably, Beijing is keen to deliver a consolation holiday for the week long May holiday, after the very important Lunar New Year holiday in Feb-2020 was lost to the virus. At that time, travel restrictions prevented travel on the usual huge scale.

But the recovery towards normality has been stuttering, as airlines constantly adjust downwards their previously optimistic projected capacity increases. Nonetheless the trend has been upwards, towards around 50-60% of 2019 domestic levels. Reports suggest that actual traveller numbers are not increasing at the same rate, and some residual travel restrictions continue to limit freedom to travel. 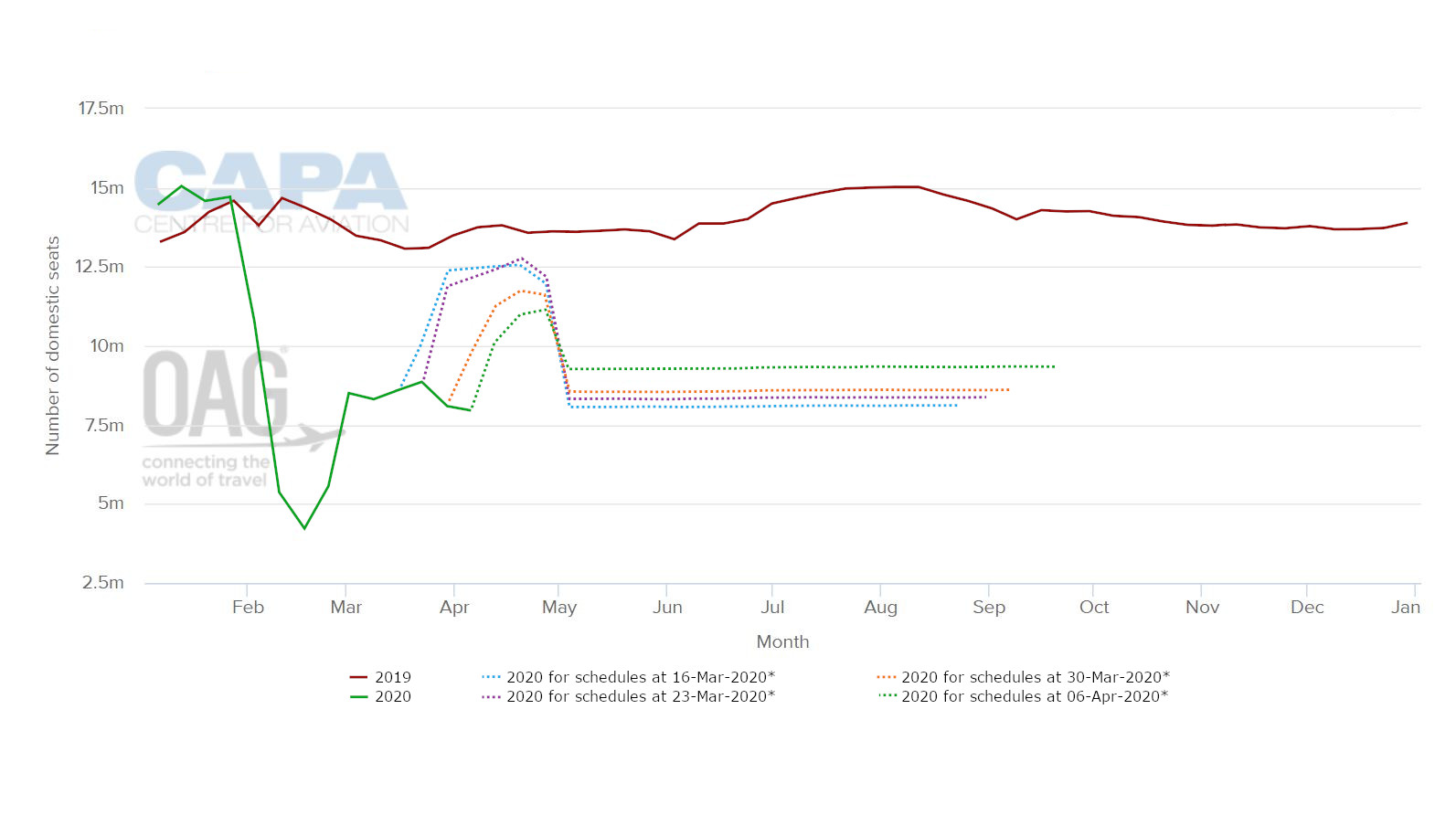 The graph shows Chinese airlines’ aggregated weekly domestic schedules filings. The solid red line is the capacity flown in 2019.
The solid green line shows the actual schedules operated and planned for the week ahead in 2020.
The dotted lines show the schedules filed week by week for the weeks ahead from that date – then adjusted downwards the following week.

If these levels are sustained and travellers return in numbers, the signs are positive for a recovery which has taken somewhere between 3-4 months from the beginnings of the outbreak.

(If a similar recovery timeframe is followed in Europe and North America this would mean a restart after the peak summer months, approaching the northern hemisphere winter schedules, already a tough period for most airlines and a time they be unlikely to introduce significant capacity increases.)

Quotes from the Masterclass.

“It will be a long road back” – especially for international operations.
“We are not going to see an industry like last year for five years, perhaps longer.”
“What we have coming out of this tunnel is a supply and demand issue – capacity-wise there will be fewer airlines and demand-wise we will have a very weak economy.”
“Health has come to the forefront in aviation. Whatever happens with the coronavirus, there is the belief this event will occur again. We are looking at the impact like 911. It will change how we behave and what we do, impacting both airlines and airports.”
What a sad time it is for airlines that have worked hard over several years to deliver liquidity, - which is now “melting like snow in the Sahara”.
“The classic fleets will be grounded, possibly for the long-term, if not forever"
“We need an international response, not national, and based on medical expertise. We need consistent measures across the world developed by medical experts”
“An aircraft is just like Harrods. It about revenue per square foot. Ticket prices would need to go up”

The full session of CAPA's COVID-19 MasterClass #1 can be viewed here.

The picture for international recovery is starkly different. China largely reflects the global pattern for reduction of flying outside the country, with limited prospects for near term upside, despite the optimism shown each week as the new schedules are filed – again using the timing of the May Day holiday as a growth target. 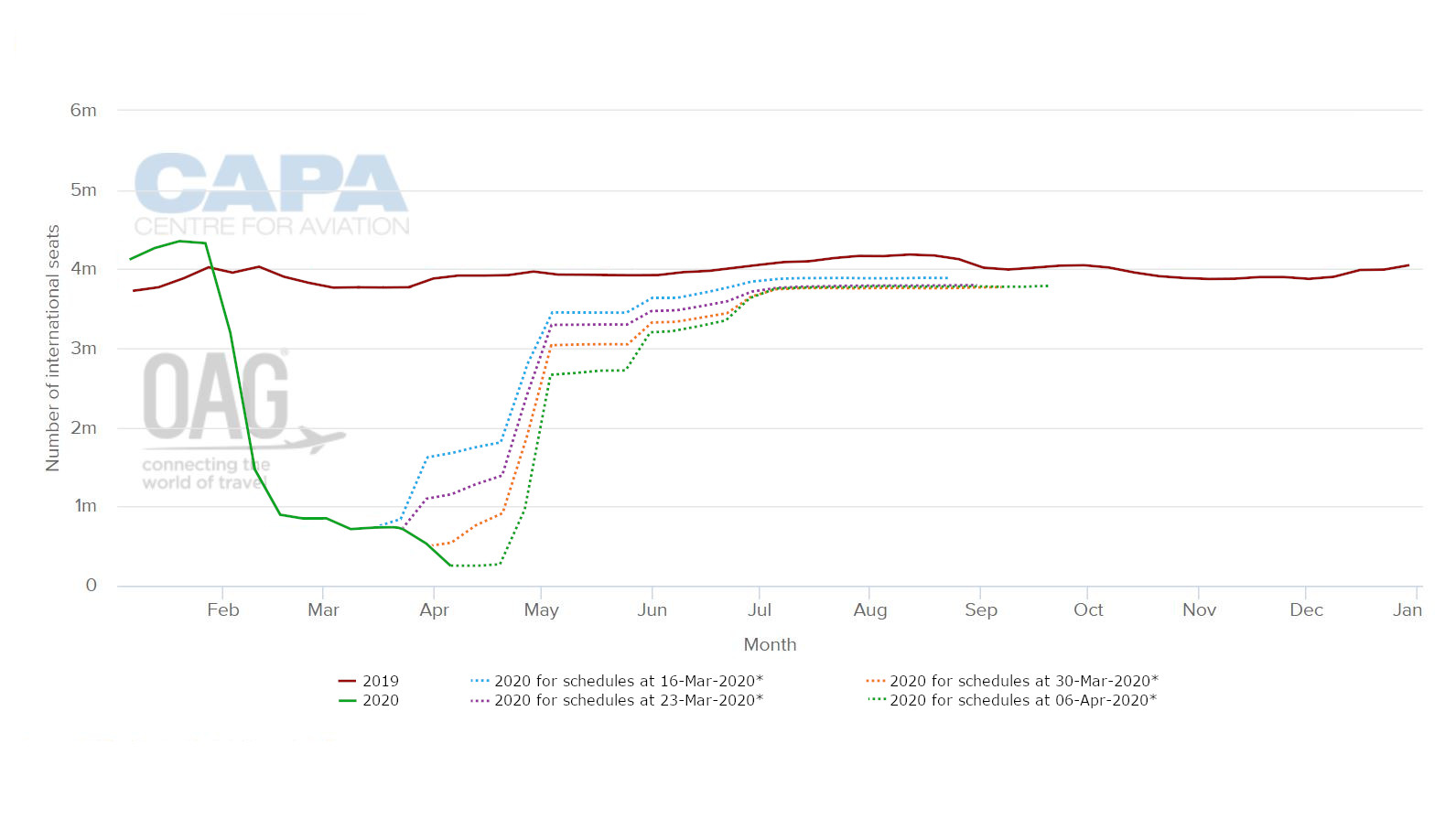 While international will languish for some time to come, domestic flying will act as the industry’s life support system and countries with the strongest domestic markets – and the airlines that operate there – will likely be on the strongest ground.

Travel restrictions will however continue to limit international activity for many months; equally, on the demand side, generally weak economies and the possibility of high unemployment rates are unlikely to spawn the sort of growth experienced in the late 20-teens.

The world’s largest domestic markets by capacity in 2019, a wholly different world

Future recovery will be measured in terms of “months” and “years”

Announcements in early-Apr-2020 from Lufthansa and airBaltic provided some guidance on how Europe’s airlines are thinking. The German flag carrier revealed plans to cut its aircraft fleet, including larger and older widebodies as well as some short-haul capacity.

It does not expect the aviation industry to quickly return to pre-coronavirus crisis levels of demand and that it will take “months” until global travel restrictions are completely lifted and “years” until global demand for air travel returns to pre-crisis levels.

Latvian carrier airBaltic has said it plans to resume operations with a shrunk fleet of five A220-300s and gradually add one aircraft per week as demand returns. It will bring forward plans to discontinue deployment of Boeing and Bombardier Q400 aircraft to simplify operations which will cover a limited network in the near future. Its CEO, Martin Gauss, has said the current situation will result in consolidations in the industry, including unexpected partnerships, as airlines merge out of necessity.

What will the future shape of the industry look like?

The 8-Apr-2020 CAPA Masterclass also covered some key topics on the future outlook of the industry. For example, if airlines need to be bailed out, will we get back to position where governments are controlling all the big airlines?

Mr Mueller believed there would be scope for “positive government engagement”, such as a system like the Chapter 11 protection in the United States that would allow freedom of several months for restructuring. If governments were to invest in airlines, he believes it should be temporary and non-intrusive operating at an arm’s length.

What about aircraft? Mr Mueller believed the current crisis is likely to accelerate retirement of older generation aircraft. “The classic fleets will be grounded, possibly for the long-term, if not forever,” observed Mr Mueller. This, he believed, would be supported by a postponement of future deliveries. 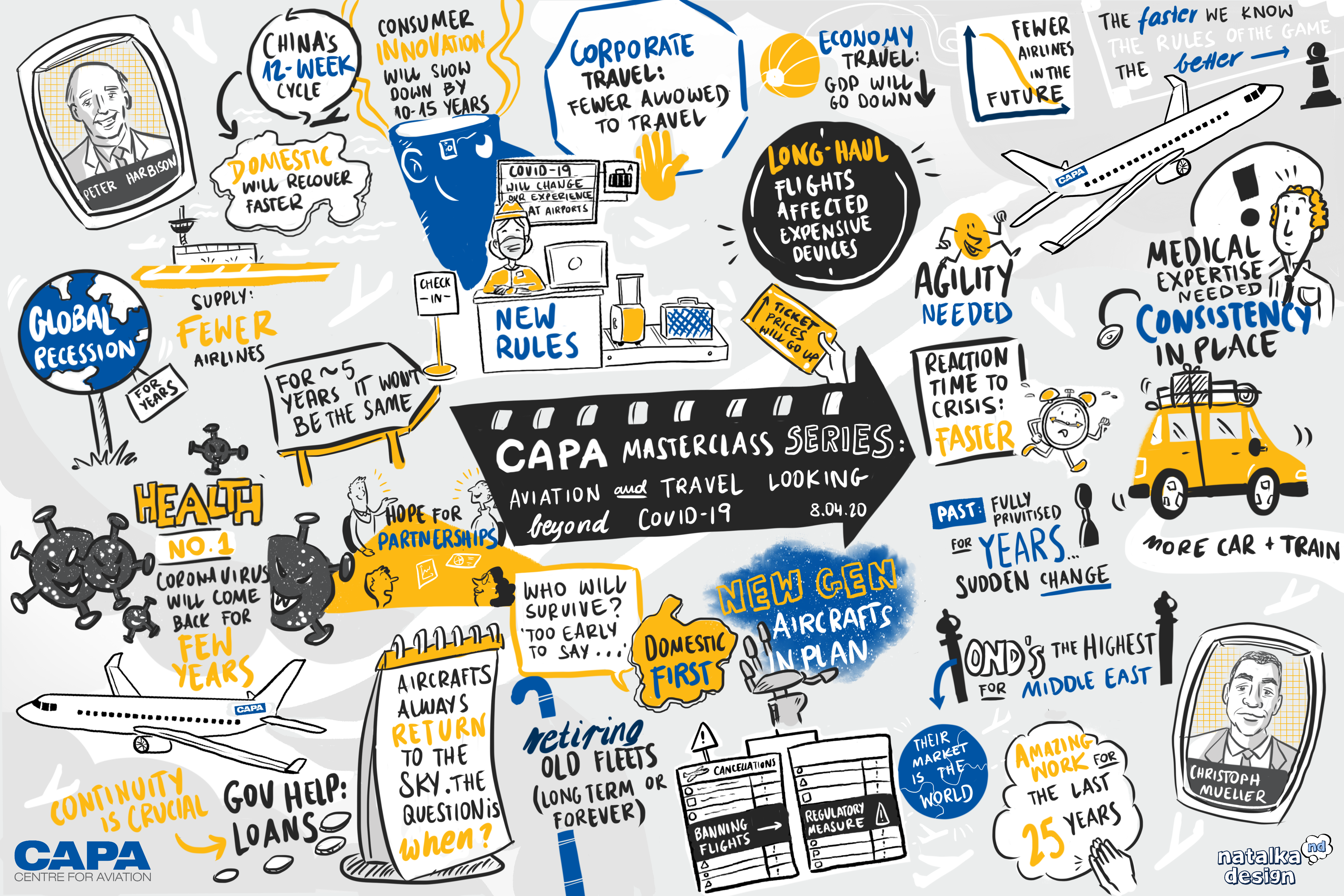 Multilateral leadership will be needed if international growth is to return

For international air services to resume on any scale, the unforgiving health challenge must be overcome.

The post-crisis international environment will be governed by national governments anxious not to import disease; by insurers who refuse to insure travellers against coronavirus illness; by companies unsure about their employees’ safety; and by a generation of grey nomads who are suddenly unwilling to risk their lives in pursuit of their travel bucket lists.

The fundamental issue – and one that will not disappear when this coronavirus diminishes – is the greatly sensitised border controls that will become a massive disincentive to international travel. That will be only partly counterbalanced by the need for tourism destinations to restore their domestic industries.

It was Mr Mueller’s belief that multilateral action will be needed, to establish agreed standards for health controls at national borders. Without that, recreating the international networks that are essential to global trade and tourism will be massively more difficult and time consuming.

“We need an international response, not national, and based on medical expertise. We need consistent measures across the world developed by medical experts”, he argued.

Agreeing multilateral standards for this new form of border control would be an ideal role to be undertaken by the International Civil Aviation Organisation, ICAO, in concert with the WHO; but history suggests this will be slow in coming.

The health and safety issues relate both to airlines and to airports, where substantial changes will be needed. As an example, Vietnam Airlines revealed on 7-Apr-2020 that it would limit the number of passengers permitted on services to Ho Chi Minh City through to 15-Apr-2020 in compliance with a request from the Civil Aviation Authority of Vietnam. The airline said it would carry a maximum of 180 passengers on Boeing 787 and A350 aircraft, and no more than 120 passengers on its A321s. – in order to allow adequate social separation.

For airports, post-911security requirements resulted in a huge surge in screening efforts, much of which is in operation today. These have created substantial inconvenience and cost to the air travel process. Social distancing will need to be introduced at airports as well as on aircraft. And, “an aircraft is just like Harrods. It about revenue per square foot. Ticket prices would need to go up”, if greater separation were necessary, observed Mr Mueller.

Aircraft with their modern filtration systems are perhaps not the main problem in this respect. In a lot of ways it is safer in health terms in to be in an aircraft than in the airport. If social separation is to be maintained in airport terminals, as well as inevitable health screening on arrival, it will be hard for airports to escape significant infrastructure adjustments.

On the path to recovery, there are certainly lessons to be learned from 911, SARS and the global financial crisis.

Towards a very different – and smaller – international aviation normal

But COVID-19 is setting a new blueprint and despite all of our beliefs and best guesstimates, it will still be weeks, months, even years before we truly know what path the industry will take.

There is little doubt it will look very different – and be much smaller – than it did just a few short weeks ago.

CAPA’s next MasterClass, addressing the global aviation regulatory regime post-COVID-19  will be aired on 22-Apr-2020. Click here for more information.