Southeast Asia is a market of both challenges and promise. 2015 will mark the second consecutive year of slower growth and potentially the second consecutive year when most airlines ended in the red. But improving market conditions, lower fuel prices and restructuring efforts should at least reduce the losses/migrate to profit and allow new growth.

The region has emerged over the past decade as one of the world’s fastest growing emerging markets, capturing the attention of global suppliers. The rapid growth has primarily been driven by fast expansion of LCCs – both independent groups and subsidiaries of full service groups. Meanwhile, flag carrier growth has stagnated.

This report is based on a review contained in CAPA's Global Aviation Outlook 2015 which appears in Airline Leader, Issue 26.

A large portion of the FSC capacity gains in Southeast Asia have come from Gulf carriers, so, on top of their strategies for dealing with LCC competition, it is hardly surprising that several flag carriers in the region are now in restructuring mode.

All but one or two of Southeast Asia’s flag carriers were unprofitable in 2014 and will likely remain in the red in 2015. Of the four main flag carriers, three have newly appointed CEOs.

Malaysia Airlines, and Thai Airways in particular, face monumental challenges as they try to right the ship and chart a sustainable future. Both are expected to cut their long-haul networks at some point during 2015 and start to focus more on Asia-Pacific while relying on partners to provide global coverage. Garuda Indonesia and Philippine Airlines have also taken a step back from previous ambitions to pursue dramatic but risky expansion in Europe and are now focusing more on partnerships to cover long-haul markets. Even Singapore Airlines, which has barely managed to remain in the black, is not pursuing full service long-haul expansion and instead is focusing on increasing its presence in Asia-Pacific using both its full service and low-cost brands.

These are all sensible strategies given the rapid growth in Asia. But competition within the region will inevitably continue to intensify, putting further pressure on yields and profitability.

Moreover, they are rapidly making inroads in the medium-haul market, which will inevitably put further pressure on the legacy operators. Following the early 2015 launch of NokScoot there will be six medium/long-haul LCCs based in five Southeast Asian markets. The rest of the world only has four long-haul low-cost operators, two of which also serve Southeast Asia. 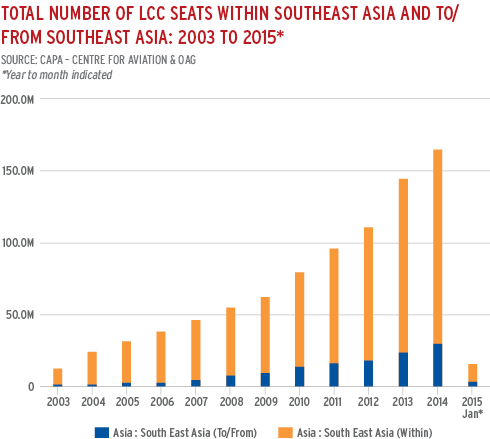 As of 1-Jan-2015, LCCs accounted for only 37 – or about 10% – of the 375 widebody aircraft in service at Southeast Asian carriers. But this figure is expected to increase by at least 10 aircraft per annum over the next several years. Meanwhile, the full service widebody fleet will see only modest growth as most orders in this sector are for replacements. The relatively limited widebody growth planned by full service carriers will also mainly be used to expand in medium-haul routes to North Asia and Australia – the same markets targeted by the fast-expanding medium/long-haul LCCs.

There will also be further capacity growth in the short-haul market as 1200 of the 1600 aircraft on order by Southeast Asian airlines are narrowbody jets. The current narrowbody jet fleet in the region consists of less than 900 aircraft, including about half at LCCs.

At the end of 2014, Southeast’s Asia overall LCC fleet stood at about 540 aircraft (including turboprops, narrowbodies and widebodies). This represents growth of about 60 aircraft, or 12% compared to the beginning of 2014. While still double digits, there was a significant slowdown compared to 2013, when the fleet grew by about 20%.

Many of these are part of wider groups, including eight within the AirAsia or AirAsia X Groups and four within the Lion Group. Six of the 22 LCCs are affiliated with full-service groups (Citilink under Garuda; Jetstar Asia under Qantas; Jetstar Pacific under Qantas and Vietnam Airlines; Nok under Thai Airways; and Scoot and Tigerair under SIA;). But these LCCs only account for 86 aircraft, or 16% of the total fleet.

Two LCCs launched in Southeast Asia in 2014 – Thai AirAsia X (Jun-2014) and Indonesia AirAsia X (Dec-2014). Two more LCCs are planning to launch in early 2015, Thai VietJet Air and NokScoot, growing the field to 24 carriers. But the market could also see further consolidation. Tigerair Mandala suspended operations in 2014 while Tigerair Philippines transitioned from a Tigerair affiliate to a 100% owned subsidiary of Cebu Pacific.

LCC capacity growth also slowed significantly in 2014. Total LCC seats in the Southeast Asia market (to, from and within the region) increased by 30% in 2013, according to OAG data. In 2014, the rate of growth slowed to 13%.

The slower LCC growth is by no means a result of more aggressive expansion from full service carriers. FSC capacity in the Southeast Asia market was up by only 3% in 2014, matching the 3% increase in 2013.

LCCs, including full-service airline group budget airline subsidiaries, are still driving most of the growth in Southeast Asia. This will continue through 2015 as the bottom end of the market is where most of the growth opportunities lie given the region’s fast expanding middle class and first time flyer population.

The slowdown in the growth rate over the last year can be viewed as a temporary hiccup. Market conditions were not favourable in 2014 and should improve in 2015.

Thailand is Southeast Asia’s largest international market and second largest domestic market. The region’s largest market overall, Indonesia, was impacted by the rapid depreciation of the rupiah, weaker economic growth and political instability ahead of the Jul-2014 presidential election. The MH370 and MH17 incidents contributed to a weaker demand environment in Malaysia.

As a hub for the region, Singapore was impacted by all these factors, leading to passenger growth of less than 2%. All the major Southeast Asian markets also experienced a sharp reduction in Chinese visitors, an important and what had been the fast growing source market for the region’s tourism sector.

Several of the main players in the region – both LCC and FSC – responded to the unfavourable market conditions by slowing expansion through a combination of delivery deferrals, subleases or aircraft sales and reduced utilisation rates. Initially the region’s LCC fleet was expected to grow in 2014 by about 100 aircraft or 25%. In the end only slightly more than half of these aircraft were added.

LCC fleet growth will again be relatively modest in 2015

Several airlines have again deferred aircraft or suspended expansion. AirAsia is planning to grow its A320 fleet by only five aircraft in 2015 after deferring or selling 24 of its original 29 deliveries. Tigerair and Jetstar Asia have suspended expansion until at least 2016. Cebu Pacific, Citilink and Nok expansion will be modest – five additional aircraft for each carrier. 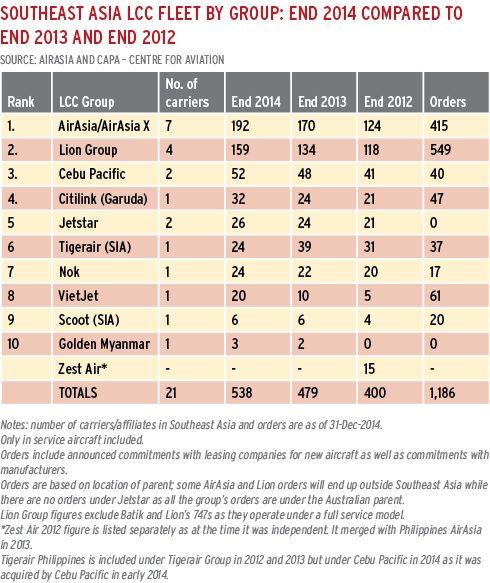 Only the Lion and VietJet groups for now do not show any signs of slowing down. Smaller but ambitious VietJet plans to add 12 aircraft in 2015 for an expected total of 32 as it closes the gap with larger rivals.

Lion is aiming to take a staggering 60 aircraft in 2015 – but it has allocated a significant chunk to full service subsidiary Batik Air and could also potentially use its leasing subsidiary Transportation Partners to place several aircraft outside the region.

Another year of relatively modest growth will give the market a chance to catch up and finally absorb the huge influx of capacity that was added in 2013 and the first part of 2014. As the region’s largest countries stabilise and demand recovers, the overcapacity concerns that have dogged Southeast Asia for the last 18 months should start to ease.

Yields could return to 2013 levels, providing a boost – along with the sharp reduction in fuel prices  – to the bottom line. A majority of Southeast Asian airlines were in the red in 2014, including both LCCs and FSCs.

But some airlines could respond aggressively to improving market conditions and the drop in fuel prices. Capacity expansion could be re-accelerated and strategic expansion could again be pursued in some markets at the expense of yields.

Over the medium term, it is inevitable higher growth rates will eventually resume, given the huge order book. Southeast Asia is the only region in the world that has as many orders as active aircraft.

Overall, Southeast Asia accounts for about 15% of the global order book although the region only accounts for 5% to 6% of the world’s current fleet. There are some legitimate questions surrounding the long-term viability of the region’s order book, particularly the LCC portion, as Southeast Asian FSCs only account for about 400 of the 1600 aircraft order with a majority being replacements.

The return of 20% to 30% annual LCC growth rates, which some of the more ambitious players seem to be banking on, may not be realistic. The market is also now much more mature than it was a decade ago, when LCCs first entered the scene. LCCs now account for almost 60% of seat capacity within the region and more than 30% between Southeast Asia and Australia, which has quickly become the world’s most penetrated medium-haul market.

Despite the probably temporary slowdown, Southeast Asia should still achieve significan growth, given its relatively strong economic position and demographics. The fundamentals of the market remain favourable, particularly at the bottom end as the continued rise of discretionary incomes means more of the region’s 600 million people can afford to fly – and those that are already flying can afford to fly more often.

2015 could bring some more adjustments to the delivery stream along with consolidation. Capacity cuts by some of the flag carriers are also likely as they finally start to make some of the difficult decisions they have avoided for years.

Overall the short-medium term outlook for Southeast Asia remains relatively bright. For the medium-longer term there is the promise of continuing intensive competition - between a mix of major airlines, their affiliates and the major independent, newer airlines. This will be good news for consumers, for airports and for some of the successful airlines.