The first set of Canada’s new 'Air Passenger Protection Regulations' became effective in Jul-2019 and a lawsuit has been filed by numerous airlines arguing that the required payments under those rules violate international aviation treaties. Consumer groups have also expressed some disappointment that the new rules do not go far enough.

Opponents of the new regulations warn the rules will ultimately drive airfares up, and although the courts have acknowledged that they have received the legal complaint, it could be some time before a decision is rendered in the case, which means that for now the status quo remains.

The latest round of consumer protections in Canada were in part spurred by a 2017 incident: an Air Transat aircraft with passengers aboard was trapped on the tarmac for approximately six hours due to bad weather, according to CBCnews. The publication stated that those passengers were kept onboard with no air conditioning, food or water.

This incident is similar to high profile incidents that occurred in the US a few years ago which led to new regulations prohibiting domestic flights from remaining on a tarmac for more than three hours, and four hours for international flights. Exceptions are given for safety or security concerns or if ATC advises the pilot in command that a return to the terminal would disrupt airport operations.

There are numerous aspects to the new Canadian regulations, which are being rolled out in two phases – Jul-2019 and Dec-2019.

During the first phase, airlines are required to provide up to CAD2,400 in compensation to passengers for denied boarding for reasons within an operator’s control; to provide compensation for lost or damaged bags of up to CAD2,100; and to set clear guidelines for the transport of musical instruments.

Other more proscriptive requirements are that there will be communication to passengers in clear and simple ways about their rights, that regular updates for flight delays and cancellations will be provided, and that the airline will ensure that passengers receive prescribed standards of treatment during tarmac delays. (see background information)

In Dec-2019 airlines will be required to compensate passengers for flight cancellations and delays within their control. Customers are entitled to compensation based on the length of delays in arrival at their final destinations. The compensation levels vary by airline size. 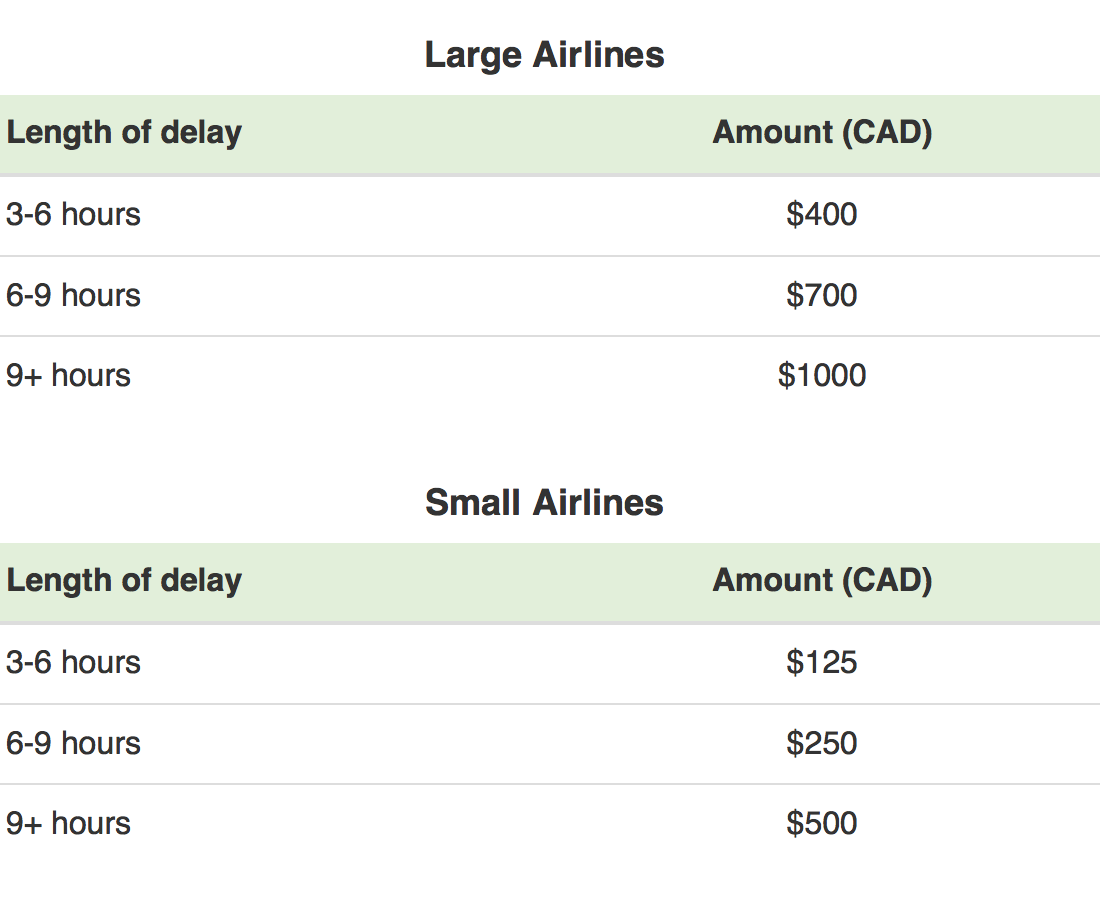 The new regulations apply to fights within Canada, and to and from the country.

All relevant stakeholders participated in the crafting of the regulations but unsurprisingly, airlines were less than happy with the final structure of the new rules.

Air Canada, Porter Airlines, IATA and other applicants filed a legal challenge to the rules, according to CBC. Among the arguments cited in that filing is a claim that the regulations contravene the Montreal Convention by setting compensation amounts based on the length of the delay, irrespective of any actual damage suffered.

According to The Canadian Press, Canadian Transport Minister Marc Garneau stated that he was surprised and disappointed by the lawsuit, adding that the Canadian government believes that the passenger rights it has put in place will “stand up”, and are fair both to  passengers and airlines.

But the publication has also highlighted that consumer advocates are not happy with new rules. They contend that the exemption from compensating customers in situations outside an airline’s control is too broad a definition and creates a loophole for circumventing the rules.

The timing of any court ruling on the lawsuit filed by IATA and others is not clear, but the association has previously submitted lengthy opinions on the proposed regulations after they were initially published for comment.

IATA has warned that the proposed regulations could put interlining at risk. They provided the example of an African airline interlining with a Canadian airline that would have to modify its systems to accommodate the few passengers whose destination is Canada, and those types of costs were not included in the cost benefit analysis of the new rules.

In its cost benefit analysis of the new rules, the Canadian government calculated that the regulations would cost approximately CAD2.75 per passenger.

“In a competitive industry such as the airline sector, this additional cost would be expected to feed through to higher air fares”, IATA concluded.

The government moves ahead with new rules as legal challenges loom

Canada’s transport agency starting developing the new passenger regulations in May-2018 and stated that it had held consultations for three months with consumer rights groups, the airline industry and the travelling public.

After the publication of the regulations the agency stated that it had reviewed all the feedback it had received, and “took all consultation input into account in finalising the regulations”.

But with two of the biggest stakeholders unhappy with Canada’s new Air Passenger Protection Regulations, what happens now?

Nothing, it seems. Canada’s government is moving full steam ahead on implementing the second phase of the regulations in Dec-2019.

Crafting sweeping new regulations to satisfy all the important stakeholders is no easy task. That is something the Canadian government is now seeing unfold.

Despite the criticism from both consumer and airline groups, the Canadian government believes its new regulations should withstand scrutiny, stressing that the rules are clear and balanced.

And for now, there are no roadblocks ahead for the second round of regulations taking effect in Dec-2019. 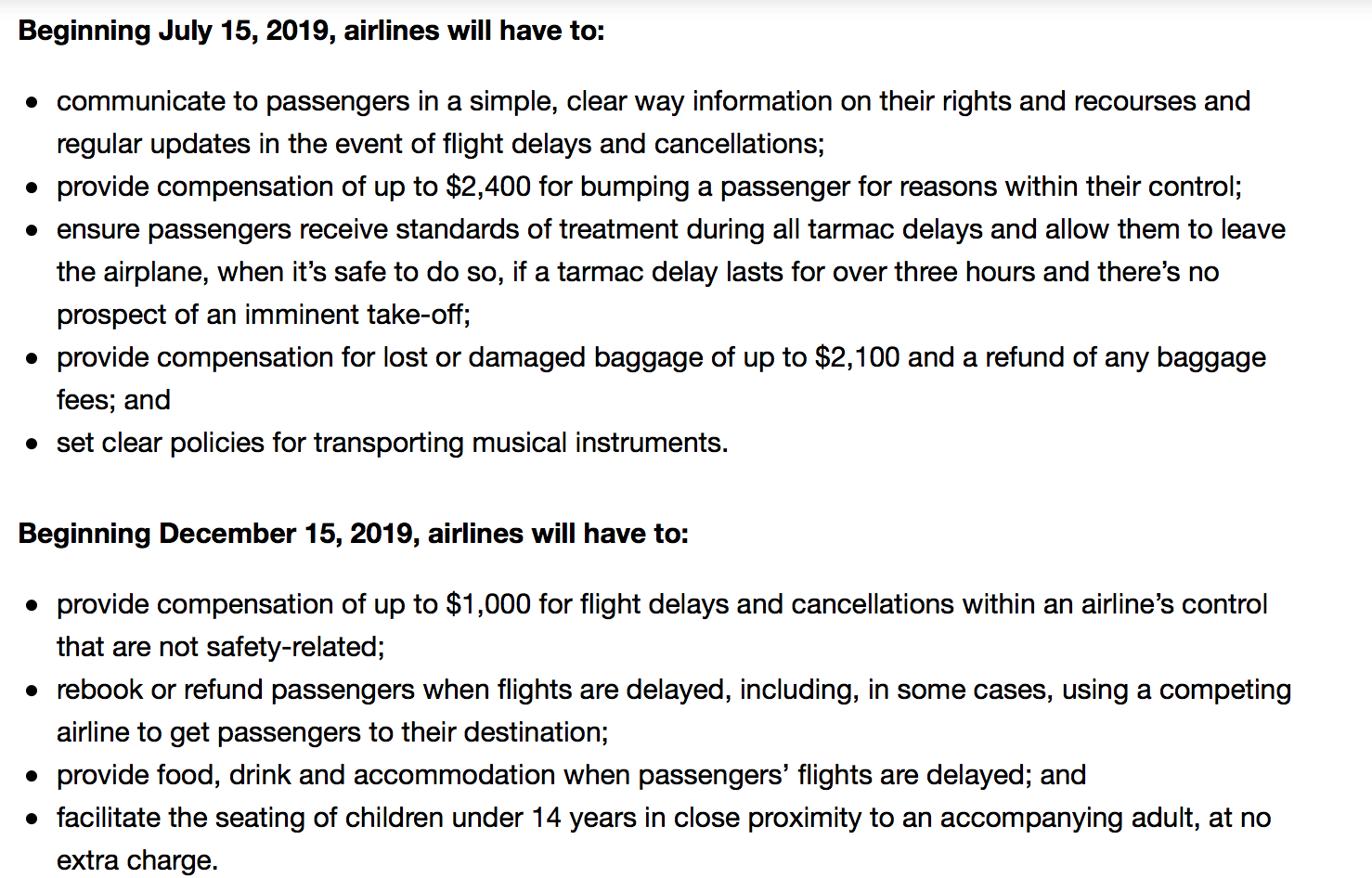