Can LCCs and regional airlines co-exist? In Europe it seems so

KLM Cityhopper MD Warner Rootliep has said that his airline can benefit from competition by LCCs on certain routes. Mr Rootliep said that the presence of an LCC on a route "creates a lot of noise about the destination". This prompts an analysis of the extent of competition between regional airlines and LCCs on routes within Europe.

There are twice as many regional airlines as LCCs operating on intra-European routes, but LCCs have a huge advantage in scale, with much bigger aircraft and a greater total number of routes. Moreover, the regional airline model has high unit costs. The only valuable card held by regional airlines over LCCs is their higher frequencies.

However, regional airlines typically operate much shorter routes and face direct LCC competition on only a very low proportion of their routes. KLM Cityhopper has a much bigger than average overlap with LCCs, but appears to have devised ways to compete.

For both the regional airlines and the LCCs based in Europe, routes within European make up almost all of their seat capacity.

Based on OAG data for the week of 13-Aug-2018, intra-Europe accounts for 98% of seats for the continent's regional airlines and 95% of seats for its low cost airlines. This compares with 78% for full service airlines based in Europe.

Proportion of seats on intra-European routes for regional, low cost and full service airlines based in Europe: week of 13-Aug-2018 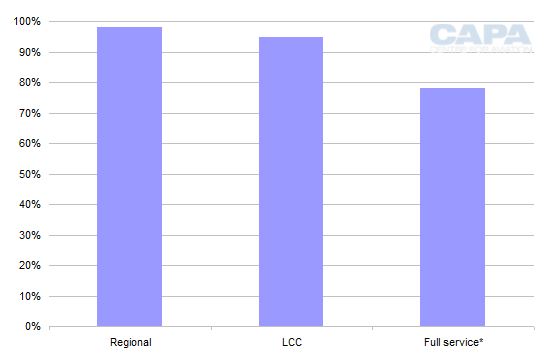 A comparison of the two categories of airline for which intra-European routes are almost entirely the only focus reveals stark differences in scale.

There are just over twice as many regional airlines (39) as there are LCCs (19) operating within Europe listed in the CAPA database for the week of 13-Aug-2018.

Regional airlines versus LCCs on intra-European routes: week of 13-Aug-2018 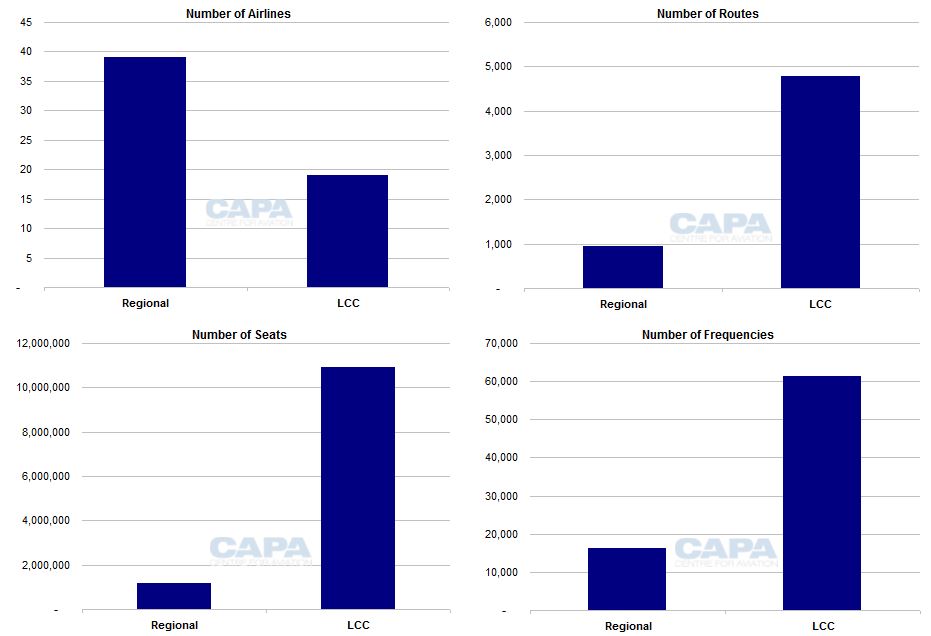 Regional airlines have an advantage in frequencies, but much smaller aircraft

LCCs are less dominant when it comes to frequencies, with only four times the number of weekly departures compared with regional airlines.

From this it can be calculated that the regionals operate an average of just over 17 weekly departures per route, versus just under 13 for LCCs. This highlights the one main advantage that they have over low cost carriers.

Regional airlines typically operate routes of the order of 1,500km or less, and very often of less than 1,000km. They operate these routes mainly with regional jets and/or turboprops, generally with fewer than 100 seats per aircraft.

In fact, the average number of seats per departure for regional airlines on intra-European routes is 72, compared with 178 for LCCs (week of 13-Aug-2018, source: OAG).

The combination of short journeys and small aircraft means that regional airlines tend to have high unit costs. Even taking account of their shorter average trip length, they have a significant unit cost disadvantage compared with other business models, in particular versus LCCs.

However, since regional airlines operate with much lower average trip lengths than airlines with other business models, they tend to face less direct competition from other airlines.

Instead, their main competition comes from ground transport, and in particular from rail services (but also coach and private car).

By contrast, there is much more overlap between full service carriers, LCCs and ultra-LCCs in Europe, particularly in the 1,000km-2,000km range of average trip length.

Analysis of OAG data for the week of 13-Aug-2018 shows that there is very little overlap in the number of routes that are operated by both regional airlines and LCCs within Europe.

For regional airlines, which operate close to 1,000 airport pairs between European destinations, LCCs overlap on only 5% of these routes. When analysed by city pair, regional airlines face LCC competition of approximately 8% of their intra-European routes.

For LCCs, the overlap with regional airlines on intra-Europe represents less than 1% of their airport pairs and less than 2% of their city pairs.

There are 108 routes from Amsterdam on which LCCs operate, while KLM Cityhopper operates 69 routes. On an airport pair basis, it faces LCC competition on 26 of these routes, or 38% of the total.

On a city pair basis, it also faces LCC competition on Amsterdam to Belfast, Berlin and London, giving 29 routes in total.

…but is apparently successful in spite of this high LCC overlap

As a wholly owned subsidiary of KLM, the regional airline Cityhopper flies under its own AOC and with a separate fleet from that of the mainline KLM operation. According to the CAPA Fleet Database, KLM Cityhopper's fleet consists of 32 Embraer 190s and 16 Embraer 175s (and it also has one E175 on order and two Fokker F-28s in storage).

Nevertheless, it operates exclusively on behalf of KLM and under the KL code to feed its parent's network from Amsterdam. Air France-KLM does not report any separate traffic or financial data for Cityhopper, since it is managed as an integral part of the KLM network.

This apparent success has been achieved in spite of a higher overlap with LCCs than is usual for a European regional airline.

On the majority of the routes where KLM Cityhopper overlaps with LCCs (and across its network) the destination attracts a significant element of business traffic, for whom frequencies are important. This may help it to defend itself against LCC competition.

Although it is more or less impossible for a regional airline to close the unit cost gap to low cost airlines, this feature should help to lower Cityhopper's unit cost. Moreover, its average fleet age is just 4.6 years – one of the youngest among its peer group.

Without more detailed data on KLM Cityhopper's costs and profitability, this analysis must inevitably be a little sketchy. Nevertheless, it seems that Mr Rootliep's welcoming of LCC competition may be well founded.