Cambodia’s aviation market grew by 13% in 2014, the fastest rate in Southeast Asia, driven by a surge in traffic from China. Cambodia has now experienced double digit passenger growth for five consecutive years, an impressive but little known achievement.

Passenger traffic across Cambodia’s three airports increased by 13% to 5.7 million in 2014 as Siem Reap surpassed the 3 million mark for the first time. The growth rate slowed from 18% in 2013 but outpaced other Southeast Asian markets as the Cambodian tourism sector seemed to benefit from turmoil among its neighbouring destinations. Tourist arrivals at Cambodia’s two international airports were up by about 13%, driven by an over 20% increase in arrivals from China.

For three years running Cambodia has been one of the fastest growing markets in Asia. While several other Southeast Asian markets also grew at double digit clips in 2012 and 2013 most markets saw a significant slowdown in 2014.

Passenger traffic in Cambodia has now quadrupled sine the turn of the century and has more than doubled since 2009. Even factoring in the dip in traffic during the global financial crisis of 2008 and 2009 traffic has increased over the last decade at an average clip of about 17% per annum. 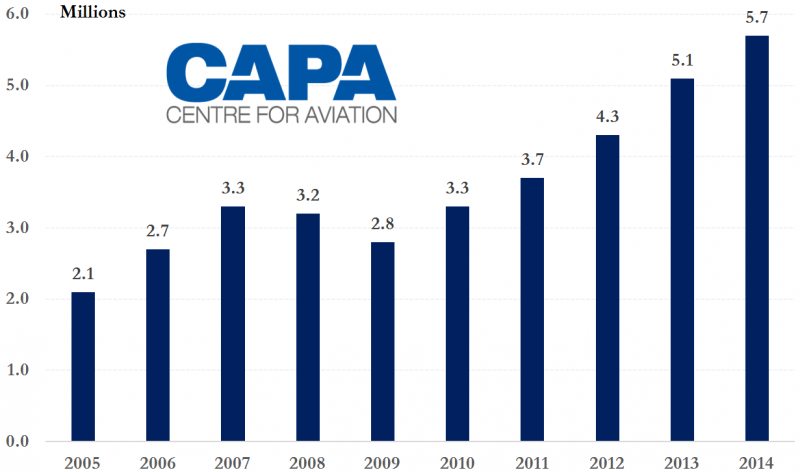 The Cambodian tourist town of Siem Reap, which is the gateway to Angkor Wat and other famous temples, recorded 13% passenger growth in 2014 to 3.02 million. The Siem Reap Airport celebrated the 3 million annual passenger milestone on 30-Dec-2014. 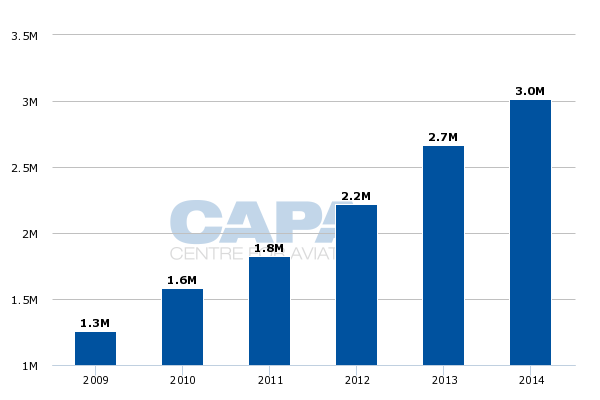 Siem Reap is currently operating above its designed capacity of 2.5 million passengers per annum but is about halfway through a major airport terminal expansion project designed to double the airport’s capacity to 5 million. The project was launched in Jan-2014 and is expected to be completed in early 2016.

Traffic at the Cambodian capital Phnom Penh increased by 11% in 2014 to 2.66 million passengers. Growth at Phnom Penh has been more modest than Siem Reap but has still been in the double digits for four consecutive years. Passenger growth peaked at 15% in 2013. 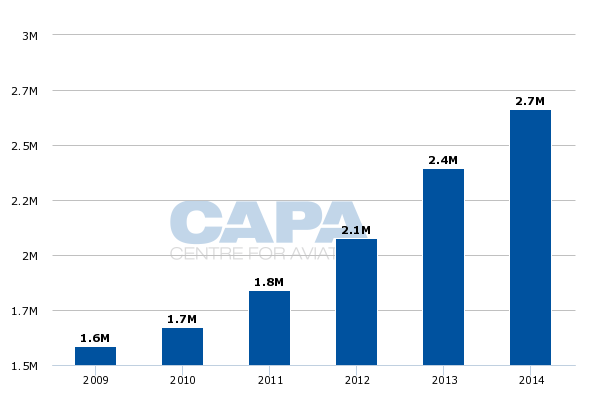 Cambodia Airports also has begun an expansion project at Phnom Penh which is designed to double capacity to 5 million passengers per annum. There are also plans to build a new airport outside Phnom Penh to accommodate future growth requirements. Siem Reap will likely reach the 5 million mark sooner than Phnom Penh but there is space at Siem Reap for further expansion while Phnom Penh is space constrained and will eventually need a new airport.

Cambodia is primarily an inbound market but the outbound market is also starting to show some growth as the middle class expands. Cambodians accounted for 23% of international passenger traffic at Phnom Penh in 2014 compared to 20% in 2013, according to Cambodia Airports data. Chinese nationals accounted for 16% passenger traffic at Phnom Penh both years, making China the largest source market.

Phnom Penh international passenger share based on nationality: 2014 vs 2013

Phnom Penh is a business and leisure destination while Siem Reap is entirely an inbound leisure market. Cambodians accounted for less than 2% of international passenger traffic at Siem Reap, which has a population of less than 200,000.

China and Korea are the largest source markets for Siem Reap, with Chinese and South Korean residents each accounting for 25% of international passengers in 2014. But China is a much faster growing market.

Seam Reap international passenger share based on nationality: 2014 vs 2013

Japan, which is the third largest source market at Siem Reap, has grown at a much more modest 7% average rate over the last five years. China, Korea and Japan combined account for over 60% of international passengers at Siem Reap.

Siem Reap international passenger traffic based on nationality, 2009 to 2014 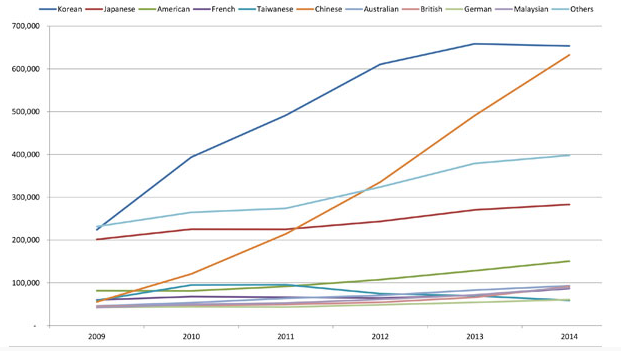 Cambodia's MOT data does not provide a break down by nationality of air arrivals but does provide a breakdown of total arrivals, which also includes road and sea. China arrivals increased by 22% to 507,000 in the first 11 months of 2014.

Thailand also generated 22% growth into Cambodia but on a lower base and most Thais cross the border by land. Most passengers flying from Cambodia to Bangkok, which accounts for about 22% of international seat capacity from Cambodia, are heading to destinations beyond Thailand.

Vietnam was the largest origin market overall, with 804,000 arrivals, but a large portion of Vietnamese also cross into Cambodia by land. Vietnam currently accounts for about 25% of international seat capacity from Cambodia.

Cambodia was able to attract a significant number of Chinese tourists in 2014 who were initially planning to travel to Thailand, Malaysia or Singapore. Demand for holidays to Thailand was impacted through the first nine months of 2014 by the civil unrest in Bangkok while Malaysia demand was impacted following the Mar-2014 Malaysia Airlines MH370 incident.

Singapore was impacted as most of its Chinese visitors to Singapore combine Singapore with Malaysia or Thailand. As CAPA highlighted in a Jul-2014 report analysing Cambodia’s passenger numbers for 1H2014:

Cambodia’s tourism authorities see the crisis in other Southeast Asian countries as an opportunity and have been doubling up on efforts to promote Cambodia as a destination to the Chinese. Cambodia, particularly the temples around Siem Reap, are an ideal destination for the growing Chinese middle class, many of whom are travelling overseas for the first time as their discretionary incomes rise.

Cambodia is close to China, cheap and culturally relatively similar, making the Chinese comfortable with eating and travelling around Cambodia. Another advantage for Cambodia is most Chinese tourists holidaying in Cambodia visit only Cambodia.

As Thailand, Malaysia and Singapore are overall much bigger destinations for the Chinese, Cambodia has only had to attract a small fraction of Chinese residents who have been foregoing holidays in other Southeast Asian countries.

Chinese airlines have so far been the main beneficiaries of the rapid growth in the Cambodia-China market. Of the 27 foreign airlines which currently operate scheduled passenger services to Cambodia, seven are Chinese – Air China, China Eastern, China Southern, Shandong, Spring, Tianjin and Xiamen.

Cambodia Angkor Air and Sky Angkor Airlines have also been pursuing expansion in China through a combination of new scheduled and charter flights. But Chinese carriers currently account for approximately 75% of seat capacity between the two countries, according to CAPA and OAG data.

Cambodia Angkor has traditionally focused on Vietnam and the domestic market while Sky Angkor, previously known as Skywings Asia Airlines, has focused on the Korea market.

The outlook for Cambodia Angkor and Sky Angkor along with Cambodian start-up carriers Bassaka Air and Cambodia Bayon Airlines, both of which plan to launch services to China in 2015, will be analysed in the second part of this report.

Hong Kong is a very small source market, accounting for only 8,000 visitors in the first 11 months of 2014. But Hong Kong is well placed as a hub to serve the Cambodia-China market as well as other large source markets that do not have any non-stop services to Cambodia, such as Japan, Canada and the US.

All Nippon Airways (ANA) could become the first Japanese carrier in the Cambodian market as it has been looking to launch services to Cambodia from Oct-2015 as part of its Southeast Asia expansion strategy.

As the Southeast Asian carriers generally have more capacity in Cambodia than its North Asian counterparts Southeast Asia overall accounts for about 66% of current international seat capacity compared to 33% for North Asia. The only airline from outside East Asia serving Cambodia is Qatar Airways, which operates one daily flight from Doha to Phnom Penh via Ho Chi Minh.

Vietnam Airlines is by far the largest carrier in Cambodia, with 78 weekly return flights and about a 16% share of current international seat capacity. It also owns a stake in Cambodia Angkor Air.

Bangkok Airways is the second largest foreign airline with 75 weekly return flights and about a 12% share of international seat capacity. Bangkok serves as the main transit point for Europe, which accounted for about 16% of total visitor arrivals in Cambodia in the first 11 months of 2014. 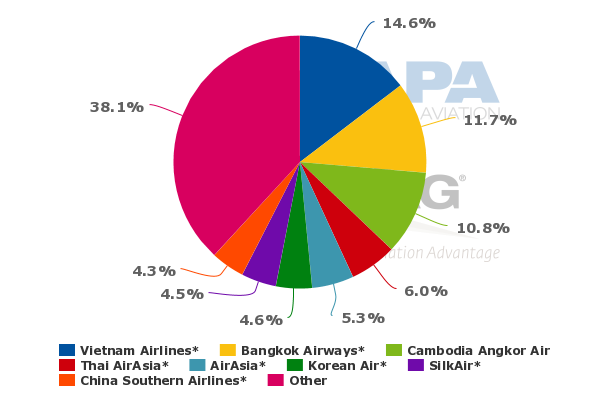 But North Asia is the main growth market. Seat capacity to Singapore has dropped over the last year (due to the withdrawal of Tigerair) while capacity to the Philippines has been flat.

Siem Reap had a similar split with 290,000 domestic passengers, 2.71 million international passengers and 16,000 transit passengers in 2014. Domestic was the fastest growing segment in 2014 – albeit from a small base – with growth of 56%.

Sihanoukville is currently only served from Phnom Penh and Siem Reap. The Phnom Penh-Siem Reap route accounts for the majority of domestic passengers.

Cambodia is poised for further growth

Cambodia’s tourism sector is still relatively undeveloped. Cambodia is working to upgrade infrastructure, which is particularly lacking outside Phnom Penh and Siem Reap. The upside potential is huge if Cambodia makes the right investments in its emerging tourism sector. Thailand and Malaysia each currently attract over five times as many visitors as Cambodia while Singapore attracts three times as many.

Cambodia is particularly well positioned to tap the rapid growth in outbound travel from China. Cambodia should be able to continue posting the highest passenger growth rates in Southeast Asia, attracting more capacity from foreign airlines along with expansion from its own dynamic airline sector.

Part 2: The second report in this series will review the colourful and fast-expanding Cambodian airline sector.