Shares of China Airlines and EVA Airways gained on Wednesday – up 4.1% and 3.8%, respectively – after China’s Taiwan Affairs Office confirmed CAAC approved up to 36 additional direct cross-Strait frequencies, to be operated by Taiwanese carriers, and is actively coordinating with respective parties in regards to a further nine additional frequencies awaiting approval.

The 36 approved frequencies include 14 to Shanghai Hongqiao, four to Beijing, four to Shenzhen, 11 to Xiamen and Fuzhou combined, two to Qingdao and one to Changsha. The nine frequencies awaiting approval includes services to Xiamen, Guangzhou and Hangzhou.

Taiwan International Securities commented that the destinations in the announcement “mostly are very popular and the increase in the flight number has been long anticipated by the carriers and investors". "The increase in flight number is expected to further boost the two carriers' bottom line as the global airline business is recovering. That's definitely what investors want to see." The company also stated that investors still have high hopes that Taiwan and China will soon iron out a plan to allow direct cargo flights across the Taiwan Strait, commenting: "I expect the two stocks will gain further amid such optimism."

Shares in Kingfisher Airlines increased 7.4%, as Angel Broking recommended a "buy" rating on the carrier’s stocks. Angel Broking Analyst, Shardul Kulkarni, told CNBC-TV18: "Kingfisher Airlines is going in a strong higher top-higher bottom cycle". "Actually we did not expect this stock to move beyond the levels of Rs 55-56 but the stock has given you a strong breakout at those levels and moved up to Rs 70."

Meanwhile, devangvisaria.com Chief Strategist, Devang Visaria, told The Economic Times: “[The carrier’s stock] just made a fresh 52-week high. So if it sustains above 69, we could look for targets of 80 and 84 on the upside but sustaining above 69 would be a key for such a target."

Separately, PTI has reported that Kingfisher Airlines is in talks with former SpiceJet Chief Executive Officer, Sanjay Aggarwal, for Mr Aggarwal to join Kingfisher in a senior management role from as early as Oct-2010. Mr Aggarwal quit his position at SpiceJet in Jul-2010. Chennai-based media baron, Kalanithi Maran purchased a 37.7% stake in the carrier with a 20% open offer. 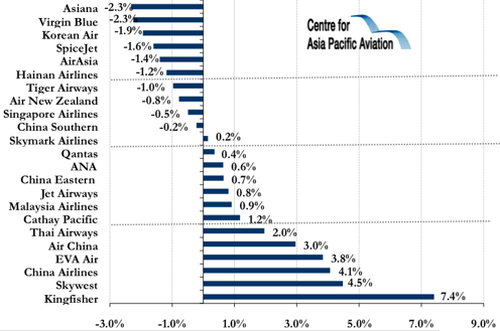