While statistics for passenger numbers in 1H2022 are yet to be collated, some indication of trends can be taken from OAG’s regular monthly round-up of the busiest airports in the categories Global, International and European; all measured by seat capacity.

In some ways there are no surprises in the Jul-2022 report. Those airports that were leaders in 2019 are slowly but surely making their way back to the top in their respective categories, and that is particularly true in Europe and the Middle East.

Asia Pacific still languishes as restrictions remain in place or are only slowly being eased. Only three airports – Tokyo Haneda, Guangzhou and Singapore Changi – make it into the tables.

Four airports stand out as performing better than might be expected: Doha, Singapore, Dallas-Fort Worth and Denver, while Istanbul continues to impress.

But the main message is that ‘business as usual’ is at least making a comeback.

Atlanta continues to hold the number 1 spot globally, Dubai back at number 2

The half-way point of ‘surprise recovery year’ 2022 has already been reached, and although formal tabulated passenger or cargo statistics for the half year have not yet been revealed, seat capacity data for Jul-2022 alone provides interesting insight into how airports are recovering (or not, as is still the case in some parts of the world).

(Note, in this instance the measure is total seat capacity on offer at the airport in that particular month rather than passengers carried, which is the usual one that CAPA employs. That is naturally the case as the month has not yet concluded). The data provider is OAG.

Atlanta continues to be the world’s busiest airport with 4.8 million seats.

Atlanta was also the busiest airport in the previous month and it typically is, although during the first pandemic year, 2020, it famously fell to second place (as measured by passenger numbers in that instance) behind Guangzhou in China, which was a city not particularly impacted by the COVID-19 pandemic in that year and one that rose by 10 places in the table.

Dubai International moves into the Top 10 in second place, with a capacity increase of +28% compared to Jun-2021.

That is an indication that long haul travel, which is what its main airline, Emirates Airline, excels at, is starting to recover. In the week commencing 18-Jul-2022 38% of the airport’s seats are on flights of six hours or longer, and in the case of Emirates it is 56%.

Dallas Fort Worth airport (DFW) moves down one place this month, to third, and Istanbul Airport moves up one place into fourth.

Dallas becoming a regular feature in these tables, and Istanbul could soon occupy a top-five place permanently

DFW was already the world’s tenth-busiest airport in 2019 (passengers carried), climbing to fourth place in 2020 and to second in 2021. The home of the Cowboys football team and Southfork Ranch has become a regular feature in the capacity and passenger tables.

Istanbul’s airport, which opened in Oct-2018, had already risen to 28th position (passengers) in 2019 and then to 19th in 2020, and to 13th in 2021. Consolidating its position in mid-2022, it will soon threaten to occupy a top-five place permanently, allowing for any significant geo-political changes in the area.

London Heathrow, which had been undergoing a recovery, moves down two places to fifth place in Jul-2022, a result of voluntary capacity restrictions by airlines led by British Airways, and now because of those imposed by Heathrow’s management, which is attempting to halve daily capacity to 100,000 seats on operational grounds – a measure that has caused great concern among its users.

Three of the next four airports are from the US (Chicago O’Hare, Denver International and Los Angeles International (LAX)), perpetuating the gains those airports made during the coronavirus pandemic, when US domestic travel was not as severely curtailed as it was in some other countries.

Denver had figured prominently during 2020 and 2021 when measured by passenger numbers, but O’Hare and LAX are now recovering at a stronger rate. California had been ‘locked down’ to a greater degree than most of the US states.

Tokyo Haneda is the leader in Asia Pacific

Tokyo Haneda (number 8) is the leading airport in Asia Pacific, a region where the impact of the pandemic is still being felt; but restrictions have started to be lifted in Japan.

Returning to (tenth-placed) Guangzhou – what was the world’s busiest airport in 2020 has been dropping places since Apr-2022 due to the COVID-19 restrictions that were belatedly applied to it, and in Jun-2022 it was in sixteenth place. However, this month Guangzhou has moved into tenth place.

Out of the Top 10 busiest airports in the world by this measure this month, six were in the Top 10 in Jul-2019: perhaps the first evidence of ‘normality’ being restored. 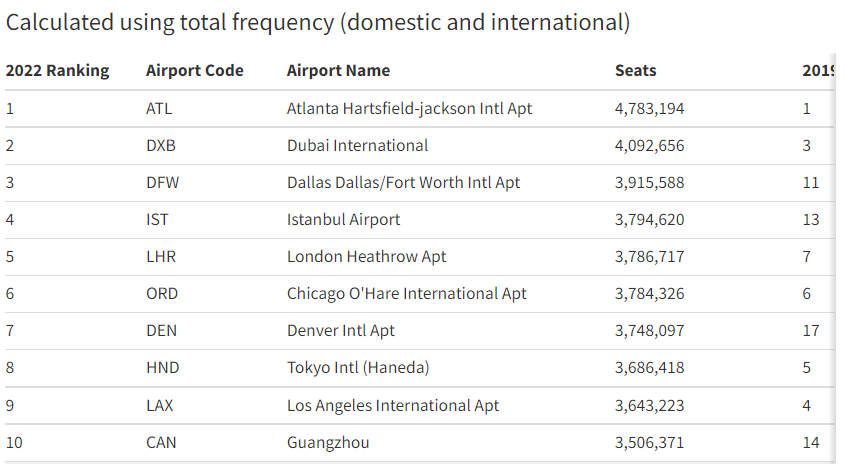 Turning to the Top 10 busiest international airports for this month, the position is very similar to the past month (Jun-2022), however, there are some place changes.

Heathrow again undone by Dubai in the international stakes

The busiest international airport for Jul-2022, again measured by seat capacity, is Dubai International, with a +28% increase in seats compared to the past month.

London Heathrow was in top position in Jun-2022 and has moved down into second place as it has done in the past, in favour of Dubai.

However, it is unclear how that position can be retained in the light of the enforced capacity reductions at Heathrow, which some airlines (notably Emirates) have challenged, although most of those airlines appear to have signed up to them.

Doha establishes itself as a serious challenger to Dubai

Doha has established itself as a serious challenger to Dubai throughout the pandemic in both the passenger and freight domains, and rose from 15th place in 2019 (passenger capacity) to seventh this year.

Another notable move this month is Singapore Changi, which shifted up from tenth place last month to eighth, with a +14% increase in seats.

It is notable because, again, it is an Asia Pacific airport showing some signs of recovery, and because in Singapore’s case it offers it the opportunity to reassert the position it once held as the undisputed gateway to Southeast Asia.

It is also interesting to see London Gatwick making the table – an airport that went down from second (2019) to fourth busiest in the UK in 2021 and fifth busiest in the British Isles. And one that had been deserted by airlines such as British Airways and Virgin Atlantic virtually in favour of Heathrow.

Out of the Top 10 busiest international airports in the world this month, seven were in the Top 10 in Jul-2019 as well. 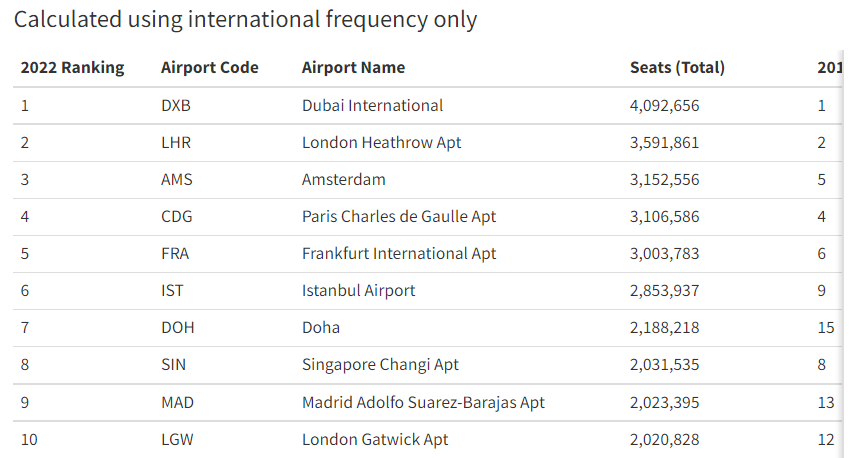 Finally, OAG has a section on the Busiest European Airport in Jul-2022.

It is fair to say that that the fastest removal of pandemic restrictions has taken place in Europe, with parts of the USA, Canada and much of Asia Pacific still subject to them.

However, the downside has been the appalling mess that air transport has become throughout parts of Europe as mushrooming demand failed to be matched by supply. (Not all of it though; some countries have coped remarkable well, which shows those that haven’t in an even worse light).

In Western Europe, the Top 10 Busiest Airports are the same as in Jun-2022, but in slightly different order.

Istanbul Airport, unsurprisingly, has moved into top position and is the busiest airport in Western Europe for Jul-2022.

Consistency of the FLAP airports suggests that normality is returning

Equally unsurprising, now that some small degree of normality is being restored, is that the FLAP airports – as they are known (Frankfurt, Paris CDG, Amsterdam and London Heathrow) – occupy the next four positions, and in the order that would be expected (i.e. 2019 passengers carried), with the exception that Frankfurt has overtaken Amsterdam to go into fourth spot.

There are several reasons for that.

The Amsterdam city-region needs the Lelystad airport to open to commercial traffic as soon as possible owing to congestion issues at AMS, while the Dutch government has announced that annual flight movements at Schiphol Airport itself will be limited to 440,000. The action is motivated by environmental concerns – particularly the noise impact on those living in the vicinity of the airport – and is expected to take effect in Nov-2023. That sends out a message to airlines that expansion is unwelcome at AMS.

London Heathrow was the busiest airport in Jun-2022 and has moved into second position this month. However, the remarks made previously about Heathrow’s capacity limitations ensure that second position will be short-lived.

Paris Charles de Gaulle, Frankfurt, Amsterdam, Madrid and Barcelona are all in the same positions as they were in Jun-2022.

The three Spanish airports lying consecutively in sixth, seventh and eighth positions are testimony to the continuing recovery of tourist travel to Spain – and especially so in the case of Palma de Mallorca, typically the third busiest airport in Spain, one that mainly handles tourists and expatriates, and an airport where a +9% capacity increase in Jul-2022 has helped it secure that eighth place.

However, it could all be undone by rates of inflation in Spain that are even higher than in the rest of Europe, and are being layered on tourists.

Mention again must be made of London Gatwick, which is clawing back lost capacity – albeit with a new set of airlines making their mark. In 2021 Gatwick was only the 36th busiest airport in Europe.

Also Munich International, back in 10th place by capacity, having fallen to 14th by passenger numbers in 2021.

Out of the Top 10 busiest international airports from Western Europe this month, nine were in the Top 10 in Jul-2019. 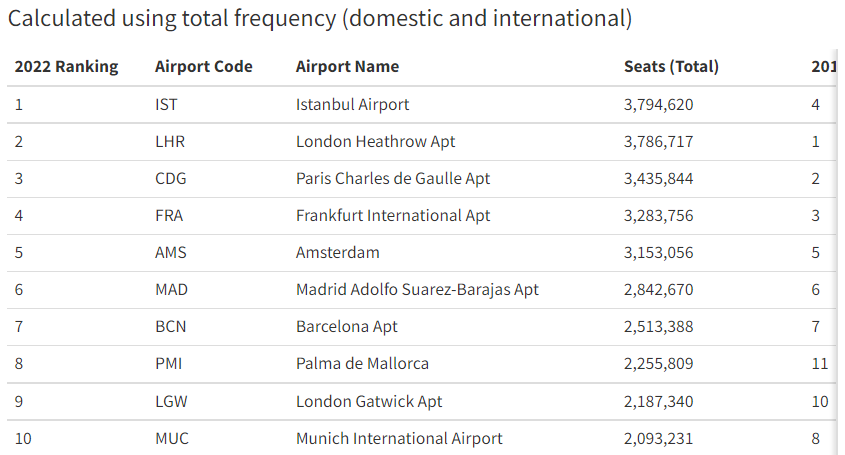 As near as it has been to ‘business as usual’

So the message coming out of this brief overview is that ‘business as usual’ is being restored at many airports, but also that those airports that have been presented with the opportunity to make strong gains (Istanbul, Doha, Dallas, Denver) have the prospect of being able to consolidate those gains throughout the remainder of 2022 and beyond.