The Hungarian market has recovered incredibly well since the loss of national carrier Malev Hungarian Airlines in Feb-2012. In the days and weeks that followed, up to 80% of the point-to-point traffic lost from Malev’s collapse on 03-Feb-2012 was quickly recovered. By the start of the 2012 summer season nearly all of the point-to-point traffic was already recovered. Wizz Air and Ryanair were first to fill the void, however other carriers from across Europe also increased their presence in the months following.

Low-cost carriers have accounted for most of the capacity added to fill the void left by Malev. Hungary-based LCC Wizz Air now faces a considerable level of competition from Ryanair, which opened a base at the airport in mid Feb-2012. While there has been a lot of activity in the past seven months, more expansion is still yet to come at Budapest Airport.

Ryanair and Wizz Air are now the leading carriers at Budapest Airport, accounting for 24% and 18% of capacity respectively. Other LCCs – easyJet, Norwegian Air Shuttle and Transavia among others – have also expanded in Budapest this year.

Five of the top nine carriers at the airport (based on seats) are now budget carriers. The LCC penetration rate at Budapest Airport is currently 58%, according to Innovata data.

Malev offered approximately 100,000 weekly seats in the Budapest market, giving it about a 47% share of total capacity. Ryanair, which has quickly become the largest carrier in Budapest, has already filled more than half of the void left by Malev as it has added over 50,000 weekly seats to and from Budapest.

Wizz Air has added about 6000 weekly seats while easyJet and Norwegian have each added a couple of thousand weekly seats. Total capacity at Budapest is currently about 25,000 seats, or 10%, below levels at the same time last year. But from purely a point-to-point perspective capacity has fully recovered as a significant portion of Malev’s traffic was transit. 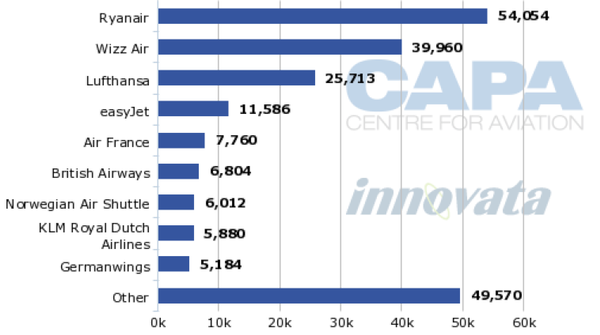 The Budapest Airport and overall Hungarian LCC penetration rates are similar as Budapest accounts for most of the country’s capacity. Wizz Air also currently operates from Debrecen Airport in Hungary to London Luton. There are currently no domestic routes in Hungary.

Of the top 10 internationals routes from Budapest, seven are operated by LCCs including four operated exclusively by LCCs. 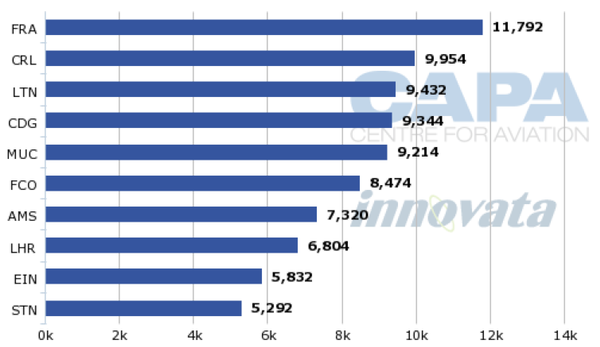 Wizz Air and Ryanair step in to fill the void

Ryanair and Wizz Air stepped in to fill the massive gap left by the loss of Malev. Ryanair was already planning to launch five services from the airport in Mar-2012 but dramatically increased its expansion plans when the news of Malev’s collapse came through. Ryanair returned to Budapest Airport on 17-Feb-2012 with the launch of six services to Barcelona, Stockholm Skavsta, Madrid, Dublin, London Stansted and Karlsruhe. (Ryanair previously served Budapest before withdrawing in 2010 after a dispute with Budapest Airport management over fees).

These initial routes were followed by an additional 26 routes in the following weeks and the basing of five aircraft at the airport. Ryanair CEO Michael O’Leary said the re-launch of services from the airport was “probably the most successful start-up ever for Ryanair”.

Wizz Air also has increased its operations at Budapest Airport. On 04-Apr-2012 Wizz Air added a sixth A320 to its Budapest Airport base, allowing it to expand its summer 2012 network to 32 destinations from the airport.

Ryanair expansion at Budapest Airport from Feb-2012 to Jul-2012

There is still some capacity yet to be recovered at the airport but there are six route launches to come between Oct-2012 and Dec-2012. Overall capacity over the next six months will be down by about 7% compared to the last six months, according to Innovata data. But this is more a reflection of seasonality in the Budapest market.

Budapest Airport’s summer 2012 programme included 34 airlines, operating to 88 destinations. Between Jan-2012 and May-2012 the airport welcomed six new airlines and 13 new destinations to the airport’s network.

A total of 38 of the 58 routes operated by Malev had been replaced with new services by other carriers by May-2012. These new services are mainly point-to-point but a considerable portion of Malev’s traffic was transit, connecting from west to east and vice versa.

Until a true hub carrier is based at the airport, Budapest Airport will have to rely on point-to-point traffic, particularly from Wizz Air and Ryanair. Without the transit component being replaced, Budapest traffic levels are unlikely to fully recover. But from purely a point-to-point perspective, traffic at Budapest is already at or even slightly above pre-Malev grounding levels.

Aside from Ryanair and Wizz Air filling the void after Malev’s collapse, Lufthansa also benefited with its market share at Budapest increasing from 7% (pre-Malev grounding) to 12% currently. There have been some service cancellations during this time however with Wizz Air cancelling four times weekly Budapest-Bucharest service on 06-Aug-2012. However this route continues to be operated by TAROM.

There is more expansion yet to come from Budapest Airport, from both new and existing carriers. Four of the six new routes scheduled to begin between Oct-2012 and Dec-2012 will be operated by LCCs. Wizz Air is launching three new routes in Dec-2012 while Ryanair is adding one more route in Oct-2012.

Air France-KLM low-cost subsidiary Transavia also has already unveiled plans to launch service from Budapest to Rotterdam in Apr-2013, supplementing its current service to Budapest from Amsterdam. Transavia launched flights on the Amsterdam-Budapest route in Apr-2012.

The new Wizz Air services to Kiev and Tel Aviv are two of four ex-Malev routes it applied for traffic rights for in Aug-2012. The airline is still waiting to receive rights for Budapest to Moscow and Istanbul. These routes currently just have Aeroflot and Turkish Airlines operating on them, respectively.

Budapest Airport is still keen to expand the range of destinations served from the airport with recent comments made by the airport in Sep-2012 inviting airlines who have not considered Central and Eastern Europe (CEE) before to consider Budapest Airport. Budapest is aiming to attract services by new airlines by offering incentive schemes, market research, promotions and reduced advertising rates at the airport.

While other airlines, particularly LCCs Ryanair and Wizz Air, have managed to fill much of the gap left by Malev’s collapse, Hungary is still without a true national carrier. However, as time goes on, more Eastern European countries may cease to have a need for having traditional national carriers as competition from growing LCCs and larger European airline groups force them out. Macedonia, for example, is another small Eastern European market which has not had a flag carrier since 2009 but has seen considerable LCC expansion, led by Wizz Air, in 2012.