British Airways' shares (-3.4%) shed another hefty amount yesterday. But as the carrier seeks sacrifices from its employees, it received some good news from the pilots’ union, BALPA. The union has agreed, subject to a vote by members, to 2.6% salary reductions from October this year and longer working hours, in return for equity in the company (see below). Other unions have still to agree to pay reductions suggested on Tuesday by CEO Willie Walsh.

TNT (-5.0%) shares also lost heavily as trans-Atlantic competitor, FedEx reported worse than expected results for the quarter to 31-May-09 and saw a bleak outlook for at least the next six months.

And El Al (-4.4%), which announced this week that it was to offer first time ever two-for-one fares in the tightly held Israeli market. This follows intense competition and a fall in May-2009 traffic at Tel Aviv’s Ben Gurion Airport of 15%. Inbound tourism is down 22% for the first five months of 2009. 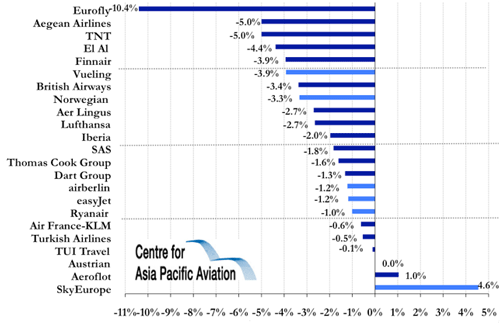 In early Jun-2009, BALPA’s Jim McAuslan, General Secretary of the British Airline Pilots' Association (BALPA) announced that the union’s aim was “to conclude a far reaching agreement by the end of the month.

He stated, "these are unusual times and they require unorthodox approaches. Pilots recognise this and we trust that it is recognised across the whole airline".